‘The Antarctica Challenge: A Global Warning’ 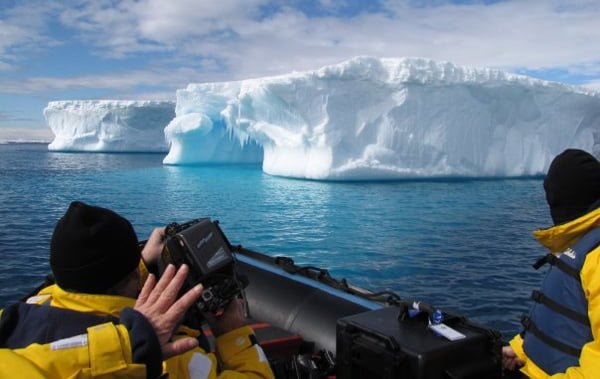 The Antarctica Challenge: A Global Warning

There was a lot of hoopla and a lot of praise, and awards, heaped on Al Gore’s global warming film (and companion book) An Inconvenient Truth, but upon close examination that film and book amounts to a lot of fear mongering and junk science when held in comparison to a new film that deals with the immediate and ongoing literal effects of global warming – that far superior film, both visually and in terms of content, is The Antarctica Challenge: A Global Warning.

Filmmaker and adventure traveler Mark Terry takes us on a journey to one of the most desolate but hauntingly beautiful places on earth, Antarctica. He brings us face to face with what global warming actually looks like in one of the most delicate eco-systems on earth that virtually none of us really thinks about as being all that consequential – even though, as shown, the effects of global warming on Antarctica will have dire, if not downright cataclysmic effects on virtually every other continent on earth.

The film begins with a beautiful, but then frightening image of a rapidly melting iceberg against a deep blue sky and radiant sunshine and then goes on to explain, both with statistics and with visuals shot right there and then, how this rapid melting of ice in the region adds to the amount of fresh water in the world significantly – which can lead obviously to flooding. But there is also the weight of the additional water and the possible effects that would have on undersea faultlines which if breeched would leading to underwater earthquakes and tsunamis.

What filmmaker Terry does with this film (he wrote, directed and produced) is state facts. Yes, there are predictions on what will result from these changing conditions, but those predictions are based on what is happening there right now, before our very eyes.

Rather than go through the litany of what is stated in the film and what we can expect the results to be, I will take a look at The Antarctica Challenge as a film, and as such it is compelling and exceedingly entertaining. This is not a scientific film specifically, it is a film that engages on a number of levels. I was fascinated by the addition of the historical aspects of our relationship with Antartica right back to the explorer Shakelton who boldly ventured out to explore this unknown land by ship only to end up stranded there for over a year and a half. Not only did he survive, but every one of his crew survived as well, and having the story told by Shakelton’s grand daughter is especially compelling.

It is true of any good film or book or piece of music that if you revisit it, it shows you things you did not see upon the first viewing (bad art reveals everything all at once). With this film upon a second and a third viewing I found myself being struck by images that were both literal and telling and symbolic at the same time.

For instance one image you will not forget is of a lonely, single penguin waddling off inland to search for new shelter and food sources for his group. Some describe the act as a suicide march, while other observers take the high road and compare that little penguin to Shakelton’s trailblazing spirit saying the penguin is not trying to kill himself, but trying to save them all. And do stay with this film through the credits – after the credit roll there is an astounding additional scene that has filmmaker Mark Terry making a cameo in which he physically demonstrates the changes that have taken place in Antarctica – he removes his gear… and goes for a swim… in Antarctica!

When measured against the images from Shakelton’s voyage of discovery, the unforgiving harshness of the landscape the gradual but significant change in conditions there cannot be denied.

This film is not the wild speculation of Roland Emmerich’s Day After Tomorrow, it is not the self-absorbed political posturing of Al Gore’s An Inconvenient Truth – The Antarctica Challenge: A Global Warning is a look at what is happening now, and tells us why we should care about this, and it does so in an accessible, watchable, sometimes beautiful way.

The Antarctica Challenge – A Global Warning screens on select dates, including August 22 at The Green Party Summer Summit in Beeton, Ontario, and between December 7 to 18 at the UN Framework Convention on Climate Change in Copenhagen, Denmark.

Visit www.polarcapproductions.com for more about the film.