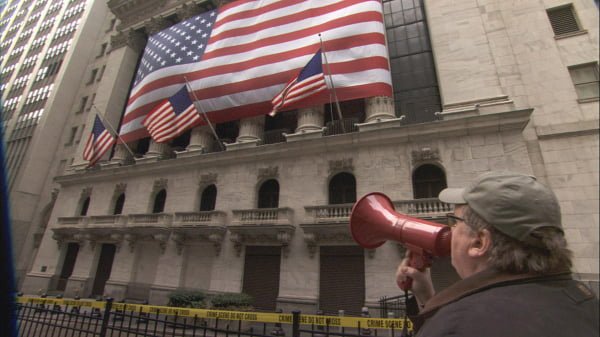 Anyone who is familiar with director/writer/activist Michael Moore‘s documentary film style (and let’s face it, after Bowling For Columbine, Fahrenheit 9/11, and Sicko, who isn’t?) is probably well aware of what he is for and what he is against. Luckily for the sake of Capitalism: A Love Story, Moore hasn’t forgotten what he’s against either and this doc is meticulously focussed on portraying the excesses and greed of the uber-rich and the banks that led to the stock market collapse. As usual, Moore is riotously biased, doesn’t hide it, and makes no apologies. The result is agit-prop gone so very, very right.

All the usual Moore-tricks are in play here – the dilapidation of Flint, Michigan, the comparison between the U.S. and other nations with similar problems (in this case, Germany and Japan), the absurd Bush administration, and quite hilariously, his infamous ambushes, this time of Wall Street, demanding the tax payers bailout money back.

But his portrayal of how capitalism has trumped democracy is truly at the heart of the matter. We meet children locked up in juvenile detention by a judge in the pocket of the corporations for offences as minor as having a MySpace page or throwing a piece of bread. Remember Sully? Captain Sullivan, the heroic pilot who safely landed a plane in the Hudson River earlier this year? Watch him testify to congress in protest of his pension cut because, as it turns out, he and all pilots make less annually than a manager at Taco Bell. We meet people put out of their own homes by the Sherriff’s office, living in their car, or squatting in abandoned homes. What’s most disturbing is the practice by large corporations such as old-Moore-nemesis Walmart to take out life insurance policies on their employees, effectively earning thousands-to-millions when an employee dies. Moore reveals that in the policy, to our disturbance, the employees are referred to as “Dead Peasants.”

Don’t worry, it’s not all a downer. There are mega-LOLs to be had here as well. Moore is quite particular about the emotions he wants his audience to feel. Once he’s broken you with all the sadness, he makes you howl at the absurdity of the system. Satirizing dominant culture’s belief that capitalism is actually in keeping with Christianity, some Jesus of Nazareth movie clips are employed with ludicrous voice-overs. “I cannot heal your pre-existing condition” Jesus now says, instead of curing the crippled and the blind. Cultural jokes like Joe the Plummer and Obama The Socialist are mocked to good measure, but the funniest section isn’t even filmed or created by Moore. Keep a keen eye out for the YouTube video sensation that mocks Cleveland. You won’t have a gut left to bust.

With the juxtaposition of laughs next to tears, what really makes a documentary effective is when change and revolution set in. The rebellion here is between the haves and the have-nots, and Moore asserts that the election of Barack Obama was a key act of rebellion by the people. The poor may have no money, no homes, and underpaid jobs, Moore says, but they still have the vote. And that gives them the majority of power, which threatens the Plutonomy. After Obama’s election, we see greater examples of rebellion – workers locking themselves in their factories in protest until their pensions are paid. Home-owners refusing to be evicted from their own homes. Worker-owned businesses forming and being more lucrative than hierarchical businesses. Even members of congress advocating greater rebellion by the people against the wealthy aristocracy.

Cinephiles will note the references to other films (Atonement, Napoleon Dynamite, Frost/Nixon, even Moore’s own Roger & Me). But the great achievement of Capitalism: A Love Story is that Moore lets his audience know that they can make a difference. As the credits role and inspirational quotes and anecdotes are spliced in, the audience is then certain that they are a part of this rebellion and will continue the fight. The message is empowering, very potent, and stirring. That’s what makes Capitalism: A Love Story a riveting documentary. Take away the politics and the bias, the audience here is the hero. And I don’t know about you, but I like being the hero.