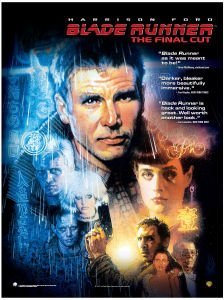 Once, during a long taped-for-TV conversation I was having with Harrison Ford I asked him if he has seen the then newly released Director’s Cut of Blade Runner (a director’s cut from Ridley Scott that was actually two minutes shorter than the theatrical release).

He shifted in his chair and smiled at me – “I’ll go you one better than that – I haven’t seen Blade Runner.” I thought he was kidding me but then as we continued to talk it became evident that he might very well have never seen the film even though it has become, rightly so, an iconic work of American cinema. Making the film was a tough slog for Ford (for everyone involved, actually) and he told me that the film he thought he and Ridley Scott were making ended up not being the film they ended up making. He thought the sets were too over-the-top busy, he hated the voice over narration (which only ended up on the original theatrical version and never again was heard in any other version) and he wanted the ending to be more clear and concise – even if it left the audience asking questions, he felt that they should at least have a better ending to raise those questions on.

Now, the long awaited special edition DVD version of Blade Runner is upon us and Warner Home Video and Ridley Scott have done it up right. There is a 2-disk version for the casual fan, there is a 4- disk version that is a very good package, and then there is a 5-disk version that comes in a replica Voight-Kampff suitcase. I am told that there is also a 3-disk package but I haven’t actually seen that one around. It is this 5-disk Ultimate Collector’s Edition that I will discuss here. And once all the material on these five disks is considered it is essentially a college course in a box that not only offers up no less than five different versions of the film but a three hour documentary on the making of the film plus a ton of material on novelist Philip K. Dick and on the technical aspects of putting this story on screen. This new Blade Runner set has to be one of the most comprehensive examinations of a film on DVD yet released.

The fifth disk in this set was the one that I was most interested in after seeing the new digitally remastered and somewhat re-edited Final Cut – the fifth disk is a very rare work print of the film that was cut together by Scott and his team to show studio executives and overseas buyers. This cut has different credits, a more pronounced use of the Japanese pop-fusion-opera music that appears throughout the film. There are several extended scenes in this work print that Scott has re-worked into his ultimate final cut – which proves that this new cut is indeed the version of this film that Scott had in mind all along.

The film is based, loosely, on the Dick novel Do Androids Dream of Electric Sheep? It is set in Los Angeles in 2019 and involves an ex-cop named Deckard (Harrison Ford) that is brought out of retirement to hunt down and retire four high functioning ‘replicants’ – androids designed to help with things like war and colonization of ‘off-world’ communities. But Deckard’s job is complicated when he becomes strangely emotionally attached to Rachel – another high functioning replicant.

A side plot involves the leader of the outlaw replicants, Roy Batty (played wonderfully by the then newcomer Rutger Hauer) trying to get to his designer, his maker, Dr. Eldon Tyrell (also wonderfully played by Joe Turkel) to get time added on to his built in four-year lifespan. This subplot was a bone of contention in the various versions – in the original theatrical version when Batty is asked by Tyrell what he has come for, he says “I want more life, fucker.” In the final cut the line makes much more sense and is much more chilling – “I want more life, father.”

The ending of the film is also much more reasonable and interesting in this new version (and the previous director’s cut). Originally Deckard and his android girlfriend drove off into the sunset (actually footage culled from the stuff Kubrick shot but didn’t use for his opening sequence in The Shining) – in this version things end a bit more abruptly allowing the audience members to wonder as to the real meaning of the ending.

Disk two contains a fantastic documentary called Dangerous Days (the original title of the Blade Runner screenplay) on the making of the film. The most entertaining contributor to this documentary is Hampton Fancher – the original screenwriter on the project that worked on the film for years before it was made. This doc is a bit longer than it needed to be, coming in at around three hours – but for the real fan, it is well worth the ride.

Disk four is the only disk that I was not that impressed with simply because it contains stuff that I don’t gravitate towards generally anyway – this disk is called the Enhancement Archive. This disk features a lot of the work of Syd Mead the futurist who came up with a lot of the distinctive look of the film.

When it comes right down to it Blade Runner is just a very cool movie. It is well written, well acted and directed by a guy, Ridley Scott, with a true sense of cinematic vision. This was also a groundbreaking film in that it blended the futuristic with the film noir creating a kind of new genre – future noir. There have been many imitators since but none came close to this original – and the original Blade Runner has never been available in such a grand, fun package before now.

The five-disk suitcase version comes with artwork that is cool. A little model of the “spinner” car featured in the film and a little shiny aluminum origami unicorn, a symbol that figures prominently in the movie. Fun stuff but the real reasons to own this set for me are disks one, two and five.