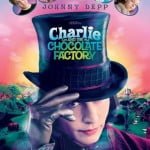 Charlie and the Chocolate Factory

I tried to like this movie a bit more than I did, but I just couldn’t. I quite liked Johnny Depp‘s eccentric performance, but ultimately this is just another over-indulgent series of visually interesting set pieces that don’t really add up to much.

The story is based on Roald Dahl’s 1961 novel about a mysterious chocolate maker who invites five children to his factory after holding a global contest by placing five golden tickets into his chocolate bars. The chocolate factory is a surreal place where everything is edible and mystery lurks around each corner and through each door. The story is told from the point of view of little Charlie Bucket who lives with his parents and two sets of grandparents in a crooked little house and are desperately poor. A fat little German kid who eats everything is one ticket holder, as is a competitive monster from Georgia, a greedy little creature from England and a TV-addicted snotty kid (also from the US), but Charlie is the kid with the purest heart so he is the one who ultimately singled out by Willie Wonka, the velvet wearing, toothy hermit with a high silly voice, who owns the greatest chocolate factory in the world.

Johnny Depp creates yet another crazy characterization, a voice that he credits his young daughter with helping him hone. His symbiotic relationship with director Tim Burton (this is their fourth feature together) makes for a hilariously high camp series of moments but, again, this is just that, a series of interesting little moments in just another corporate hype-fest from Hollywood.

Burton has made a lot of the fact that A, he never liked the rather charming little 1974 musical version of Charlie and the Chocolate Factory (with Gene Wilder as a gentle voiced Willie Wonka) and B, he is sticking more closely to the very good Roald Dahl novel. First of all, Burton has said his version “is not a musical” yet there are several very irritating song and dance numbers. And Roald Dahl actually wrote the screenplay for the 1974 film himself, so I think he was okay with the musical direction that movie took.

And as for Burton sticking to the book – no more or less than the 1974 version in my view. Burton has added in a whole subplot that is not in the book involving Wonka’s relationship with his dentist father (played nicely by one of my favorite actors in the world: Christopher Lee) – he also takes the wonderful poems that make fun of the faults of the silly, greedy children and sets them to music – musical numbers that obscure all the words so it ends up just being another bit of visual candy.

Of all the Depp/Burton collaborations (Edward Scissorhands, Ed Wood, Sleepy Hollow), this one is the weakest of the bunch – Depp is wonderful to watch as he always is, his acting choices are fearless as usual, but is that enough to make this a recommendable movie? Not really but if you are a Depp fan, and there are more and more of them all the time, then this stuff really is irresistible.

My recommendation for Depp fans is to see the movie – to those who are not so crazy about Depp, read the Roald Dahl novel – it is a memorable and resonant little story that delivers its message with a gently clarity and wild and weird wonder that this movie simply does not deliver.