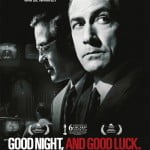 Good Night, and Good Luck is a fantastic movie. It is well written (by George Clooney and Grant Heslov) it is well directed (also by George Clooney) and it is exceedingly well acted (yep, Clooney is one of the co-stars as well). And not only that – this film tells a tense, emotionally charged, riveting story about a damn near forgotten part of television and American history that needs to be discussed, especially now.

The story is of the battle between CBS network TV star Edward R. Murrow (played with such brilliance by David Strathairn that he has to be a shoe-in for an Oscar nomination) and his battle with not only the head of the network, Bill Paley (Frank Langella) but with the dreaded Senator McCarthy who was in the middle of his communist witch-hunt during the HUAC hearings in the 1950s.

This film is shot by director Clooney (who plays Murrow’s beleaguered producer Fred Friendly) in rich, stark black and white that captures each furrow of each brow on every character as they move through this slice of history. Clooney doesn’t opt for a lot of stylish cinematic razzle dazzle here – he smartly, and maturely just gives this story the respect it deserves and lets his actors play these roles to the high heavens.

I cannot lay enough platitudes on David Strathairn – this is truly a towering performance. Not only is his acting pitch perfect, he also looks a lot like Murrow so the disappearing act is made even more profound. And the words that Murrow so famously uttered are a dream for any actor to repeat (see the interview with Mr. Strathairn to follow) and Strathairn does a fantastic job of capturing the authority of Murrow’s words – Murrow was from a time when words actually had meaning and a lot of what Murrow predicted about television has come to pass.

The other big surprise is George Clooney – I wasn’t a great fan of his directorial debut, Confessions of a Dangerous Mind, but the advance he has made here it gigantic – this is like Francis Coppola going from Dementia 13 to The Godfather. If Clooney decided he would never act again and only direct, I believe he would become, probably will become, a director on the level of Clint Eastwood.

Good Night and Good Luck, which are the famous words that Edward R. Murrow used to sign off each of his broadcasts, is an intelligent film, a film with a soul and a brain and a beating heart. There has been so little of this kind of film on the cinematic landscape of late that this one stands out like the CN Tower. And just wait until Oscar time – this film will be on the list of nominations in at least six categories (hold me to that!).