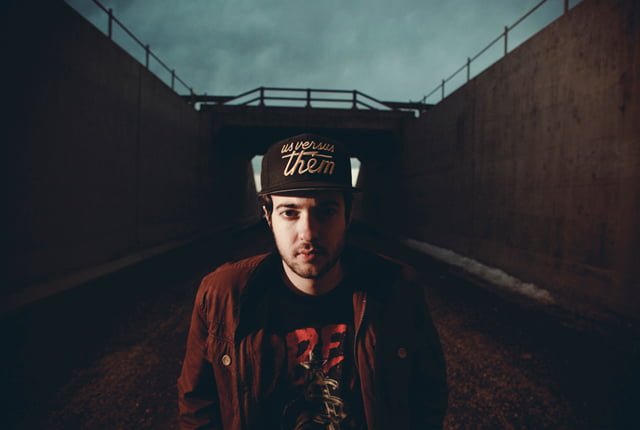 When Transit first came to Calgary, he was surprised at the reception he got. Some told him that the city wouldn’t be receptive to his particular brand of hip-hop; that it just wouldn’t work. Those people were wrong. Since first moving to Calgary from Victoria for university, he has become a voice of the city and built a solid fan base here.

We met at a Starbucks in the Calgary suburb of Millrise near the south edge of city. Dan Bennett, who performs under the name Transit, is wearing a baseball cap and baggy jeans. He looks the part of a hip-hop artist, but the location gives the other half of the equation away. He’s a youth worker. He recently got married and adopted a son. He raps about Calgary and tries to keep away from topics like violence and misogyny.

Bennett first made waves with a video that he and his friend Dave Wallace created in 2010. Called the “8 hour challenge” the duo wrote a top 40 style hit in 8 hours. It went viral after making its way onto Reddit and Wimp. It currently has over 500,000 views. Gene Simmons took note of it and offered the pair the chance to make pop hits on his record label, which they turned down. “[It] kind of just sparked a really cool discussion of people arguing about ‘is pop music valid,'” says Bennett. “Not to say that pop music isn’t good for something. I mean, you can’t dance to Nick Drake.”

Transit has taken a satirical approach on some of his other songs, including “I’m so Indie” which has been one of his most successful songs on the charts–“Calgary (We’re Not All Cowboys)” sometimes takes on a similar tone–which pokes fun at hipster stereotypes. “It’s awesome. I mean, I love doing that kind of stuff, but it also pisses me off too because I have a lot deeper stuff that I try and showcase as well,” says Bennett.

Bennett’s “Calgary (We’re not all Cowboys)”, featuring Jann Arden, was made with the aim of showcasing the more creative side of Calgary. “There is a huge area and a huge subculture that just doesn’t get as much attention elsewhere, even in this city, because it’s not as profitable. It’s more profitable to talk about Stampede and Paul Brandt and stuff like that,” says Bennett. The video included a cameo by Calgary Mayor Naheed Nenshi that was arranged via Twitter. He’d been thinking about sending out a press release but decided to tweet the mayor instead. Nenshi said yes right away.

Bennett grew up in a very conservative family. From a young age he learned to play “violin and piano and stuff like” but had no interest in that kind of music.

His father was a pastor and rap was strictly off limits. In elementary school he traded his school lunch for a Wu-Tang cassette tape. He printed off and memorized the lyrics to Tupac’s “Changes” before he ever heard the song. It wasn’t until Bennett started getting into trouble at school that he thought about writing music and lyrics. “I had to go see this counsellor and he’s like, ‘You should write poetry’, and I was like, ‘That’s lame’, cause I was this 12-year-old arrogant kid and I started thinking about it and I was like, ‘Rap’s kind of like poetry’, and I started writing rap,” Bennett tells me.

After finishing his degree in behavioural science at Ambrose University College Bennett opened up a free recording studio with the Boys & Girls Clubs Beltline Youth Centre. “It’s a really tangible result with music because hip-hop is the voice of the streets and if you can provide them with that it really enable them for expression and for validation and self-esteem,” says Bennett, almost echoing his own experiences growing up. “You get a kid in a psychiatrist office he’s not gonna talk but you put a beat over it and there’s no limit to what he’ll share.”