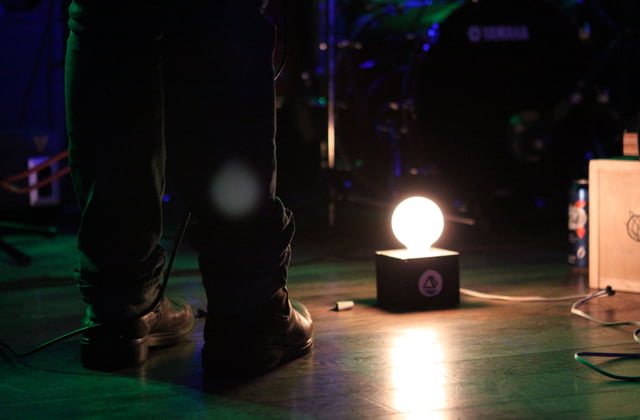 One of Calgary’s best music festival, Sled Island, has officially begun. The festival includes over 250 bands in over 30 venues over five days. The first day of Sled Island was busy, but not as busy as later days will get. First, I stopped by Commonwealth and then went to Republik. 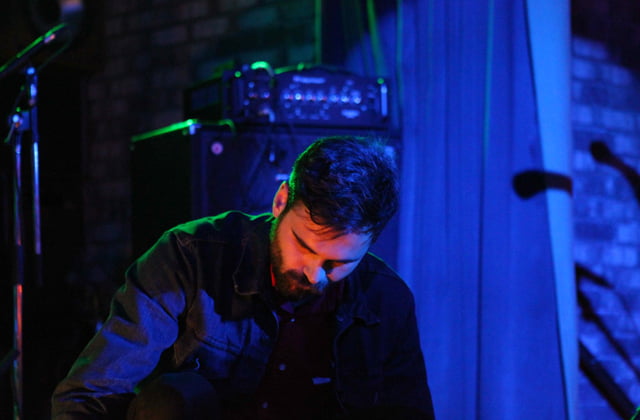 You are lost in the woods. It is starting to rain and getting dark. You are probably not going to make it home tonight. New Friends would provide your soundtrack.

The guitarist stands hunched, swaying over a white telecaster. Another is seated, playing a box-like instrument, his face half in shadow. The drummer is bathed in white. There is a single light bulb in the middle of the stage. Together they produce eerie, peaceful and oddly disconcerting music. 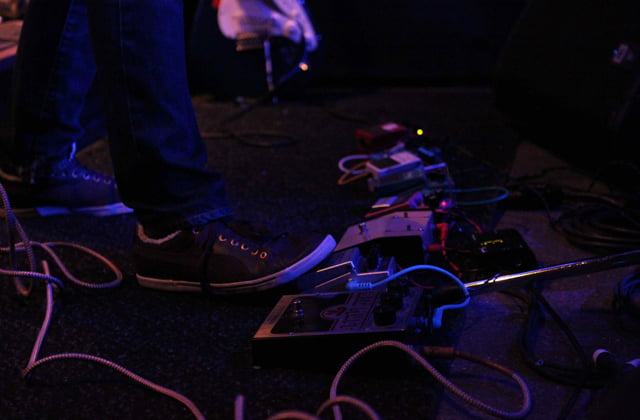 When we head downstairs after the last set, we find a guy with curly hair hunched over a guitar. The strap is held on with tape. Below his feet are a line of effect pedals. He uses these to loop the guitar.

His music is eerie in a tense kind of way. It is what you get if you play all your basic guitar chords or notes over top of one another. One repeated note slowly fades to be replaced with another. It might be one song, or many. Who really knows? 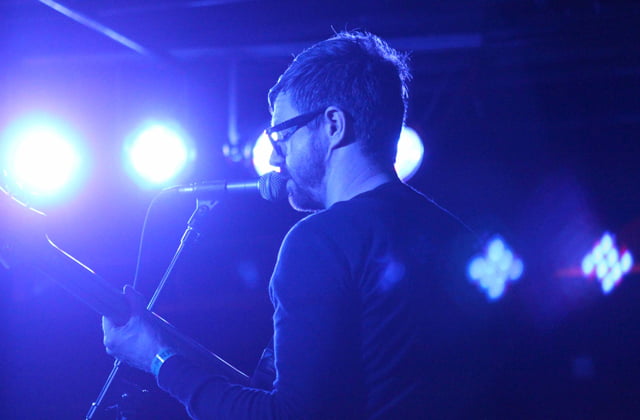 Astral Swans is a clever name for Matthew Swann’s (Extra Happy Ghost and Gold) solo project. It is just him, his beard and his guitar. His voice croons in unison with his chug-a-chug guitar slowly rising to a crescendo before beginning again. 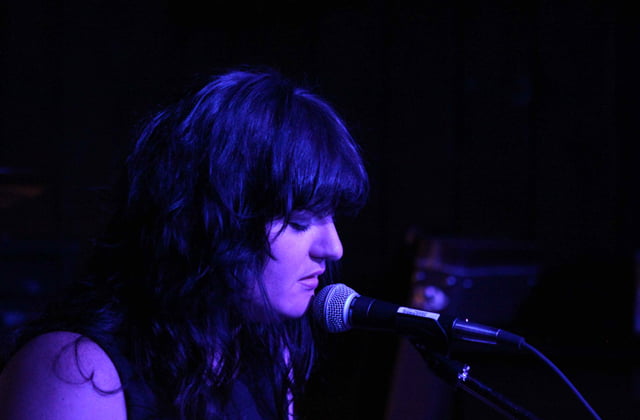 There’s nothing like the sound of heartbreak combined with a piano. Add a sultry and rich voice, and sassy lyrics and you have the type of act that has everyone doing a double take.

She has a penchant for storytelling and drama. “This song is about surviving the rapture,” she tells us as the lead in for a song inspired by the Mayan apocalypse. Some people trail off to get good spots for Colin Stetson but I am quite happy exactly where I am. 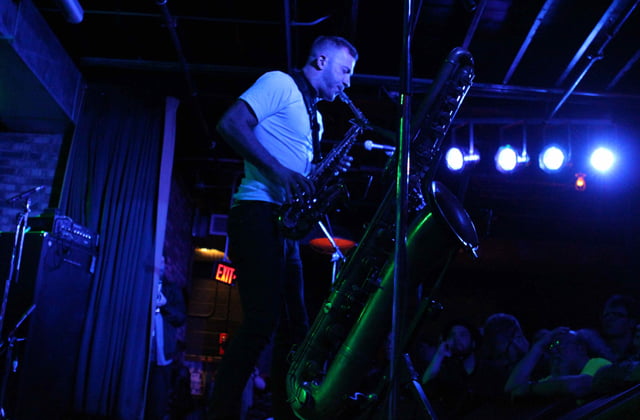 When I get back upstairs a huge crowd has gathered. There is barely room to move. Everybody is excited about something.

When Colin Stetson gets on stage somebody behind me says, “Man is he handsome.” I am more interested in what he is about to do with the two horns in front of us. One is absolutely massive and the other is almost child sized in comparison.

Then he starts to play. I am impressed with the sounds that he makes. I am more impressed that this many people have gathered to watch him do it. But then I think of his bio and it all makes sense. He is a Polaris Prize nominee. He is a touring member of Arcade Fire, Bell Orchestre and Bon Iver. To me he sounds a lot like a whale. I don’t think that is a bad thing. 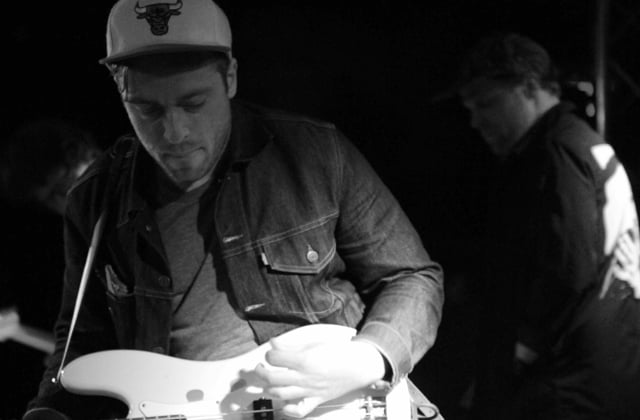 Bleacers kick off a set of three bands at Republik that are all very good in very different ways. Their singer has a rich baritone voice. They are all stylish. Some wear ripped jeans, keys dangle from belt loops, the bassist sports black and white artistic tattoos, and all have beautiful shoes.

Their music is an energetic rock/punk that sounds like the Strokes. Their pace is fast and furious. 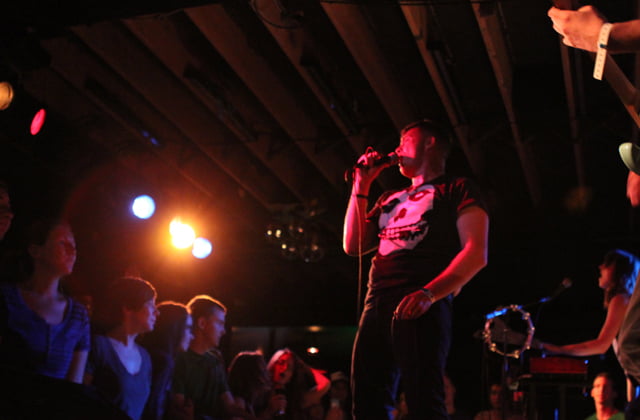 Sound check seems to take forever. The crowd stands stiff and impatient. Then Christian Hansen decides to get things started. From the beginning he is hopping around and the energy levels go through the roof. He knows how to put on a show, and might just be the best person at it in the entire Sled Island line-up. The rest of the band are in on it too. The keyboardist/tambourine player is all over the place. She is dancing, doing kicks in the air, jumping on Hansen’s back and massacring her tambourine (apparently this one is new after another one was unable to take a previous show) as pieces of metal fly off. 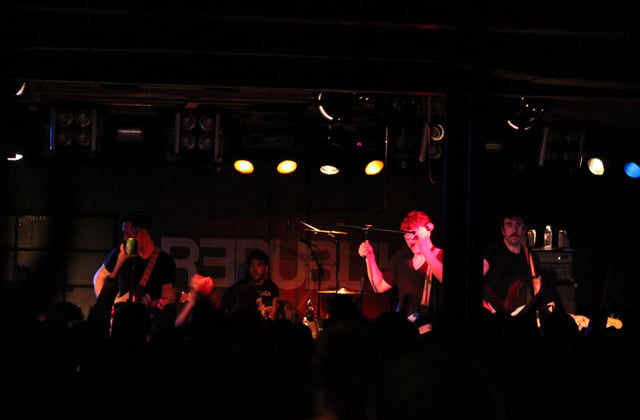 Hollerado have a tough act to follow but have the advantage of being known by most everyone in the crowd. They are the last act and a lot of us came for them. They have energy and understand the art of moving around on stage. They are best on their big hits that everyone knows. All four of them contribute vocals, which helps to build a rich and full sound.

Unfortunately their in between banter can come off as a little immature and unrefined. Nobody wants to know about the dirty jokes they make in their van when they are bored.