Evening Hymns on finding inspiration in fields and forests 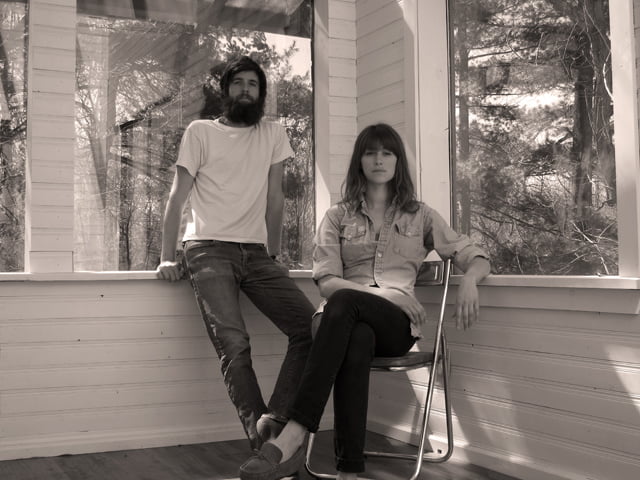 Evening Hymns’ music is filled with the sounds of nature. The band’s second album, Spectral Dusk, was recorded in a log cabin near Perth, Ontario. It is mostly calm acoustic guitar layered with an assortment of other instruments. I spoke with Jonas Bonetta, the man at the heart of Evening Hymns, over the phone.

He lives on a one-acre plot of land near Mountain Grove, Ontario surrounded by farmland. The area is replete with rolling hills, wooded areas as well as fields. “It’s a real mix. I love it,” he tells me. “It’s really similar to what I grew up with like fields and forests.”

He grew up on 50 acres north of Orono, Ontario with the same mix of fields and forests as well as two creeks, a pond, his family home and a cabin that served as the practice space for his first punk band.

“I use nature in all my songs as a metaphor for working out all the other stuff that’s going on in my life. I think if I would’ve grown up in the city that probably wouldn’t have existed,” Bonetta tells me. “I don’t consciously think about it, it’s just when I’m writing it comes [to me], because I like to write with metaphors I always end up kind of like dragging those songs through the woods first before they come out because that’s what I’ve grown up around.”

Bonetta lived in Toronto for a few years but didn’t write at all while in the city. “I just kind of got old enough to make a really conscious decision now to move out of Toronto,” says Bonetta.

He decided to make a move back to the country inspired in part by his father’s death and in part by a desire to be in a place that was peaceful.

“I’m putting myself in quiet and peaceful places to write and I’m writing kind of quiet peaceful songs,” he tells me. “I’m trying to write songs to calm my mind and so doing something that’s more down tempo and meditative for me is a calming thing.”

Spectral Dusk was written about the death of Bonetta’s father who passed away shortly before Spirit Guides was released in 2009. The album was his meditations on his father’s life and Bonetta’s experience of that loss.

“My record isn’t really a record of grieving so much as trying to figure out who I am through that loss and who he was and how that affected me and how it continues to is, I think, kind of beautiful,” reflects Bonetta.

When I ask him what he’s listening to, he tells me that he mostly listens to his friends records, which he finds it difficult to keep up with. Bonetta has a close circle of friends working in the music industry who were happy to lend a hand on Spectral Dusk, which includes appearances by Timber Timbre and The Wooden Sky, among others.

“I don’t ever have to go looking too far because amongst my circle of friends are so ridiculously talented,” says Bonetta. “With this last record too because the material is so close to my heart, writing songs about my dad I wanted to make sure that everybody that was playing on the record understood what the game was all about and they either knew my dad or were with me through that grieving process.”

His father’s death compelled Bonetta to take stock of his life and inspired several changes including his decision to leave Toronto.

“This super positive move to the country for me and all these opportunities I’ve had over the last couple of years I probably wouldn’t have done if it wasn’t for his passing,” he remarks. “It’s really pushing me to explore what I want to do and where I want to be, how important certain things are in my life. I’ve kind of taken stock since then.”

Bonetta and his father were quite close. They worked together at the family trucking company and sawmill. “One of his life’s dreams was to have a sawmill and so that’s what I was doing when my music career was just kind of starting to turn into something I was running a saw mill on the weekends and playing music on the week,” he tells me.

After playing on his own with the help of some loop pedals under his name Bonetta decided to create Evening Hymns in 2007. “I was about to make an EP,” he recalls, “I didn’t want people to see my name and just be like, ‘oh he’s just a singer songwriter with an acoustic guitar because he’s playing under his name.'”

He chose the name Evening Hymns because he thought it evoked something peaceful or meditative. Much like his need to find a peaceful place in the woods to write he felt that the name would create a space for the music he intended to play.

“I think that those two words together sound really nice I wanted that music to evoke that sense of I don’t know meditative music played at night time,” says Bonetta. “It’s the same thing with the records it’s like it’s not so much about collections of songs but just trying to create a certain feeling for a certain period of time so the name I tried to do the same thing which is like I mean reading that name and then trying to create some little type of world that exists around it.”