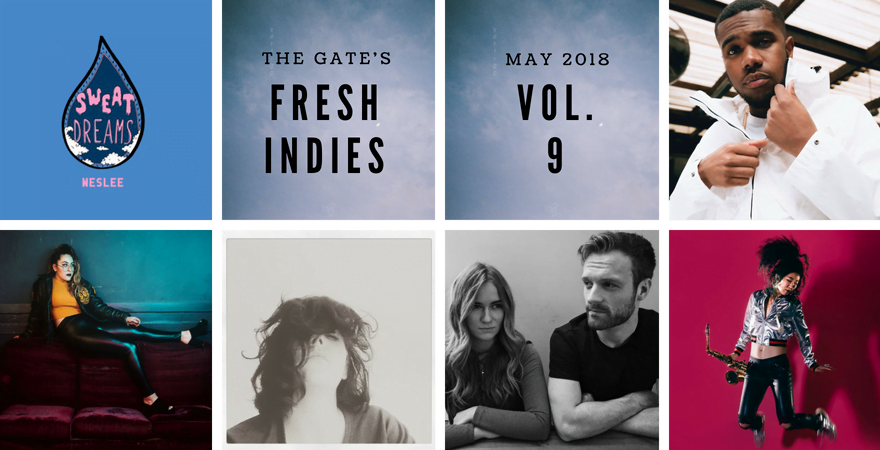 Listen & follow the full Fresh Indies playlist for April & May on Spotify.

“Sweat Dreams” is a sugary, smooth, and upbeat R&B track that feels like a cool drink on a hot day. The groove is solid, the vocals are sweet, and the beat is utterly addictive. It’s one of the best tracks we’ve heard in 2018, and it’s a perfect track for your summer playlist.

WESLEE has already earned more than 12 million streams to date, and “Sweat Dreams” is off their upcoming seven-track EP, F-9, that’s coming out June 8. Listen to more of their music on Spotify, and follow WESLEE on Twitter and Facebook.

Ramz is Ramone Rochester, an artist that started out with the massive hit “Barking” last year, debuting to 80 million streams worldwide, and 35 million views on the video. Now, Ramz has dropped his latest single, “Family Tree”, and already the video has earned 7 million video views, and it’s a track that shows the potential of this up-and-coming R&B singer from the U.K.

The song is a feel-good hit, and Rocherster’s vocals are as solid and inspiring as his lyrics. “That’s my family tree. If you know about them, then you know about me.”

“Family Tree” was produced by Fraser T Smith, and the video was directed by Kaylum Dennis (Stormzy, Krept & Konan, Dave, Raye, Not3s). One of my favorite parts of the “Family Tree” video is that it was shot around his home town of Mitcham, South London, and features Rochester’s friends and family.

Jules – “Before You Picked Her”

Jules may only be 16 years old, but her music packs the power of a seasoned singer with real fervor and grit. “Before You Picked Her” is a souful and inspired track with incredible rhythm, and lyrics that are confidant and grounded.

Hailing from Oakville, Ontario, Jules Collarile has been developing her style and sound for years, and in 2014 she reached the semi-finals in the Canadian National Exhibition’s Rising Star Talent Competition. With her music, Collarile has also supported a number of charities, including to help raise money for cancer research.

Cattle & Cane‘s single “7 Hours” is a folksy pop song that features a killer beat, and soaring vocals that blend for complex, charming harmonies.

The band is a family project, and those harmonies are thanks to siblings Helen and Joe Hammill, the band’s lead singers, with the work of brothers Fran (keyboard & backing vocals) and Vin (bass), and their friends Tom Chapman (drums) and Thom Fripp (guitar).

The track is off the band’s 2017 album, Mirrors, which was mastered by Frank Arkwright at the legendary Abbey Road Studios in London and has earned 3 million streams on Spotify alone. The album also earned critical acclaim from the likes of Elton John, and Dermot O’Leary on BBC Radio 2.

Canadian singer and songwriter Emilie Mover debuted her latest single “Walkin’ Through” recently, and it’s a gorgeous example of the artist’s whispering, endearing, spirited, and shimmering vocals. Blending elements of folk, jazz, and modern pop, the track is delicate and wistful, but the heart beats strong, and that comes back to Mover’s vision for the song.

“While it may sound like your typical love song (and can definitely be interpreted that way),” Mover said, “‘Walkin’ Through’ is actually about my relationship with the unseen, the big picture, the divine, Hashem, G-O-D – whatever word you want to call it. It’s about having faith in something, and striving to maintain that faith even though the world can often be a very doubtful, cynical place.”

Emilie Mover learned to play guitar when she was 16, and she’s been developing her skills ever since. If Mover sounds familiar, it’s also likely because she’s been featured in a number of ads and TV shows, including Grey’s Anatomy, Pretty Little Liars, and HBO’s Girls.

Grace Kelly‘s “Feels Like Home” is so perfect, it’s a song that seems instantly familiar. Performed with Kelly’s band, and special guests Elliott Skinner (Thirdstory) and Leo P (Too Many Zooz), the video is charming and will make you feel like you’re home too, capturing a live performance that is vibrant and enthralling.

The 25-year-old artist has an almost magical way of making her music feel intimate and powerful, and it translates perfectly for her live performances on Facebook Live. The artist has been recognize by Vanity Fair for her exceptional electro jass-pop style.

“I wanted to connect with fans all around the world as well as the ones right in front of me, and have them feel the magic of new music and the visceral experience of it through their screens,” Kelly said. “I wanted them to feel as if they’re witnessing the music’s conception.”