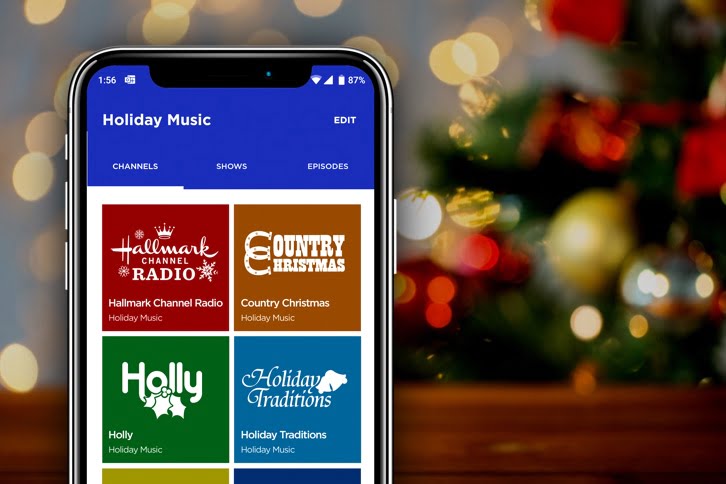 Get ready for that festive spirit. SiriusXM announced 19 holiday stations today to help get everyone in the spirit of the season, with something for all kinds of music lovers.

Streaming on the SXM app and on SiriusXM devices, the channels range from classics to rock, and everything in between.

New stations announced this year include Holiday Instrumentals and Noël Incontournable, and the return of favourites like Holly and Holiday Traditions.

Visit SiriusXM.ca for more details on the channels, and to get details on how you can sign up for a subscription. SiriusXM offers streaming options for home, on the go, and in your car.

Most holiday channels are available now on the SXM app until December 26, while channels will take over the satellite channels listed below over the coming days.

Traditional holiday recordings from the ’40s through the ’60s by artists such as Bing Crosby, Andy Williams, Ray Conniff and Nat King Cole.

Hallmark Channel Radio is back for the holidays, featuring timeless Christmas music and carols that celebrate the joy of the season. Hear the songs you love brought to you by beloved Hallmark stars like Candace Cameron Bure, Lacey Chabert, Jonathan Bennett, and more, who will share their favourite holiday songs and traditions. The channel will also take listeners behind the scenes of their all-new Countdown to Christmas movies. Hallmark Channel Radio is the perfect destination to embrace the wonder of the season with loved ones. Available on satellite from Monday, November 23 until Sunday, December 26.

The tree may be lit, but SiriusXM wants to help you unplug this Christmas with nothing but acoustic holiday tunes. Hear new and classic holiday songs from well-known singer songwriters and bands like Jack Johnson, Sia, George Ezra, Train, Norah Jones, Maroon 5, Jason Mraz, The Lumineers and many more. Available on satellite from Friday, December 24 until Saturday, December 25.

Mannheim Steamroller takes holiday classics in a refreshing new direction with their signature blend of symphonic, new age and rock music. Explore more than three decades of their majestic sounds of the season with Mannheim Steamroller founder Chip Davis.

Extensive collection of Hanukkah-themed music, including contemporary, traditional and children’s selections as well as daily reflections and prayers related to the holiday. Available from Tuesday, November 23 until Monday, December 6.

Upbeat, energetic holiday hits from The Chipmunks and Gene Autry to Mariah Carey and Jose Feliciano. Feel-good, singing along with the songs you know, bringing smiles to the season! Always a holiday hit…on Jolly Christmas.

An all-new holiday music channel featuring holiday favourites, but the vocals are replaced with instruments. String, piano, orchestra versions and more of your favourite holiday hits. Feel free to sing along with holiday hits instrumental style.

Fire up the chestnuts and be prepared to bop along under the mistletoe with Christmas favourites from classic legends and contemporary jazz stars alike. Featuring songs from Ella Fitzgerald, David Benoit, Wynton Marsalis, Kenny G, Dianne Reeves, Dave Koz, and Vince Guaraldi.

Sing-a-long to the biggest and most familiar Christmas and holiday songs from the ’70s and ’80s. Featuring songs from The Carpenters, Elton John, Paul McCartney, Madonna, Bruce Springsteen, Bryan Adams, Hall & Oates, The Jackson 5 and more.