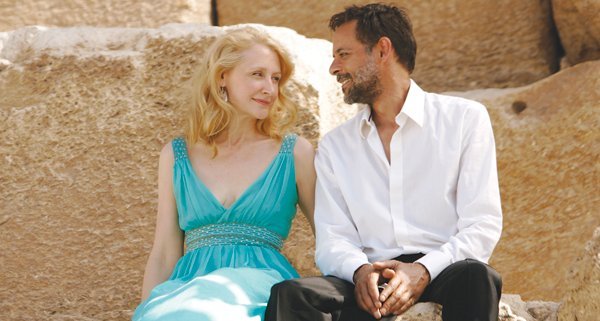 Critically-acclaimed stars and over-exposed starlets have descended on Hollywood North for the largest public film festival in the world, and the hype surrounding this year’s TIFF selections is in full force. From another political thriller from George Clooney (Men Who Stare At Goats), and Jennifer’s Body, a Megan Fox vehicle which adds to the commercial-tweenification of horror films, to Mariah Carey’s Oscar-buzz performance in Precious, there are in fact too many must-see films for this one reviewer to see. But there are some rather quiet TIFF selections, not concerned at all with hype, which undoubtedly very few film critics will bother reviewing. That’s where I come in! Defender of the quiet, indie, low-PR flick! Protector of the sans-celebrity movie! Creator of this What To See and What To Miss list at TIFF! Now go forth, festival-ize yourself. And prosper.

Behind The Scenes: Nick Hornby, who wrote the screenplay, is also responsible for About A Boy, Slam, Fever Pitch and High Fidelity. If you’ve read any of these novels, you know he specializes in coming-of-age youth stories. An Education is no different. Insert predictability factor here.

Reality: After viewers get over the fact that this film feels like a reunion of the Keira Knightley co-stars (Mulligan, Rosamund Pike, Dominic Cooper), you’ll probably enjoy Mulligan’s breakthrough performance which is loaded with heart but reigned in with a solid resolve. However, the film follows a formula from Act 1 to denouement, and it’s hard to feel the high stakes, if any, involved.

Verdict: Only if you’re looking to kill a few hours.

Behind The Scenes: Although shot entirely in Egypt, this is a Canadian funded and produced film. Some may recognize Canadian actor Tom McCamus from several of his roles in the films of Atom Egoyan. Many will recognize British-raised Alexander Siddig from his 7-year-stint on Star Trek: Deep Space 9 (then billed as Siddig El Fadil), but also from his more prominent roles in Hollywood blockbusters such as Syriana and Kingdom of Heaven.

Story: Juliette (Clarkson) is in Cairo to visit her husband who has been away for many months on a UN mission, but due to conflicts is unavailable, and sends his colleague and trusted friend Tareq (Siddig) to keep her company and show her around. Cultural clashes and mutual understanding blossom into a friendship, and then something more.

Reality: What’s fascinating here is the non-sexuality of this transnational love affair. There’s no heated passion, not even any forbidden hand-holding or kisses. Director Nadda has crafted a story that shows not all love-affairs are based on sex. This is one of emotion and quiet respect. The city of Cairo is as much a character here as the people involved. The Nile, the Pyramids, the hooka bars, the bustling markets, and the jewellery shops all have their significant roles to play. And the colourful Cairo city-scape adds a high-gloss sheen to a film already loaded with substance.

Behind The Scenes: written by Canadian Deepa Mehta, infamous for her Water-Earth-Fire trilogy and Bollywood/Hollywood, she is reunited with Lisa Ray who starred in several of those films, and Seema Biswas who gave a memorable performance in Water.

Story: Set in the Canadian embassy compound in Delhi, India, McKellar and Ray play Michael and Maya, transferred to live in the compound from Toronto. Maya is an embassy official and brings home the bacon, while Michael is a stay-at-home Dad and former chef still indulging in his love affair with food. Stella (Biswas) is their scheming maid who uses every opportunity to skin off the top and profit from her less-than-saavy Canadian employers. But when Michael asks her to teach him the intricacies of Indian cookery, a sacred teacher-student relationship is formed – a relationship that could crumble when the new nanny threatens to expose Stella and all her scheming.

Reality: It’s dangerous territory to make a film where the Indians are treacherous, selfish, hucksters and the white people are innocent hard-working victims. But this film feels less like a comment on thievery in India and more like a light-hearted screwball comedy. We root for the hilarious thieves, and yet still root for the dizzy-headed victims. Those looking to engage in a love-affair with food, à la Chocolat or Julie & Julia, will be somewhat disappointed as the cooking scenes are very few and lack passion or emphasis. Which begs the question, why is even this called Cooking with Stella?

Behind The Scenes: Those already familiar with director Jane Campion’s work, such as 1993’s Oscar-sweeping The Piano, know they can expect a sumptuous, ornate film of colour and beauty. She’s cast fellow Australian Abbie Cornish, who last made waves as a junkie in Candy, opposite Heath Ledger in one of his final performances, and Ben Whishaw who made his mark as serial killer Grenouille in Perfume. Based on their published letters, this film explores the famous love affair between canonized Romantic poet John Keats and his neighbour Fanny Brawne in 1813’s Hampstead Heath. It makes good employ of Keats’ actual poetry, and is named after the poem written for and about Brawne.

Story: Keats (Whishaw) is a penniless poet struggling to sell even 20 copies of his book, and Brawne (Cornish) is his headstrong neighbour with a flair for creating striking fashions and putting bothersome men in their place with her clever wit. Brawne doesn’t think much of Keats as a person or poet until she learns of his delicate care of his dying brother Tom, another victim to the TB epidemic, and offers compassion and solace in his hour of mourning. They fall in love slowly and tenderly, through brief encounters and an ardent exchange of letters, but Keats lack of fortune prevents them from marrying. Then Keats’ health begins to fail, and things begin to look grave.

Reality: Campion shows love here as a very subtle thing, seen in elongated glances, butterflies dancing in the air, slight brushes of hands, the wind billowing up a curtain, or quiet knocks on a shared wall. Tree tops and flowered-laden meadows and wet marshes are all put to good use here, as Campion uses natural light and colour and scenery to pepper her film. So it’s surprising when the sexual tension seems to just gallop off the screen. Romantic poetry suddenly becomes something sizzling and fervent. Abbie Cornish does not disappoint, her performance is gut-wrenching and achingly bittersweet, while Ben Whishaw makes every gesture and emotion seem effortless.

Verdict: Don’t miss it, even if you’re on your TB death bed!!

Story: Erik (Mabe) goes searching for his estranged girlfriend at a Medieval re-enactment camp where his brother Bjorn (Krupa) is also participating in the role-playing “Wild Hunt:” the Celts battling the Vikings in a weekend-long extravaganza. Sporting flounced dressed, fat steel swords, Norse horned-hats, and Medieval armour that puts Braveheart to shame, Erik and Bjorn set out into the forest on a quest to save the Princess girlfriend from the evil King she has left Erik for. Without breaking character and always dressing accordingly, of course. But mirroring the ancient Norse myths and legends this film is based on, the battle re-enactment and real life are about to get very bloody and deadly for this group of geeky boys who bruise easily.

Reality: Forgiving the fact that Krupa looks eerily like Don Henley, this film offers moments of sheer geekdom-hilarity and brutal violence that don’t mesh as well as they could have, Krupa, although in a supporting role, is the shining beacon of this film, fanatically-obsessed with leading the Vikings to victory, and always sporting an awesome blonde wig. His performance is a blend humour with humility, but he’s not enough to save this all-over-the-place modern retelling, that by Act 3, has confused you so much, you’ve stopped caring.

Behind the Scenes: Almodovar has always used his films as homages to his of-the-moment muses and the process of filmmaking itself, and Broken Embraces is no different, this time worshipping the goddess that is Penelope Cruz, who starred in previous TIFF entry Volver. Almodovar also makes tongue-in-cheek references to his previous film Mujeres al borde de un ataque de nervios (1988). Keep an eye out for Rossy de Palma, star of Mujeres… who makes a cameo.

Story: Henry Caine (Homar) is a blind screenwriter who is paid a cryptic visit by the son of his former producer, Ernesto Martel. Their very brief encounter brings a flood of memories back to Caine: the film he never finished editing, the star of the film Lena (Penelope Cruz) whom he fell in love with, her unhappy marriage with Martel, and the tragedy that ended their affair and took his sight. Caine’s agent Judit (Blanca Portillo) and her son Diego (Tamar Novas) get drawn into the drama when the truth about their relationship is revealed as well. As Caine relives the experience of filming the ill-fated movie, the movie within the movie unfolds before him. Confused yet? Join the club.

Reality: Almodovar is a master of the sexual psychological thriller, utilizing all elements in equal forceful measure – voice-overs, flashbacks, spooky soundtrack music and blatant sexuality. Unfortunately, this genre of film died out after 1993’s Sliver, along with Sharon Stone’s career. Several times throughout this movie-within-a-movie thriller, the characters can be quoted as saying, “This kind of stuff only happens in a movie!” Very true, all the tropes of a predictable thriller are here – forbidden lovers killed, jealous husbands, the “he’s-really-your-father” revelation, a film-within-a-film scenario, and the big confession in the end where everyone’s secrets are exposed. This film works better satirizing the genre than actually as a serious addition to it. Many scenes are laughably histrionic, feel dated, and in many ways underestimate the intelligence of the audience. The only benefit from sitting through this 120+ minutes wank-fest is getting to see Penelope Cruz’s mesmerizing face in every scene. I may be a straight woman, but I could watch her strut her stuff on the silver screen happily for days. So creating an ode to her here is understandable. But after La Mala Educacion, Almodovar should have called it a day.