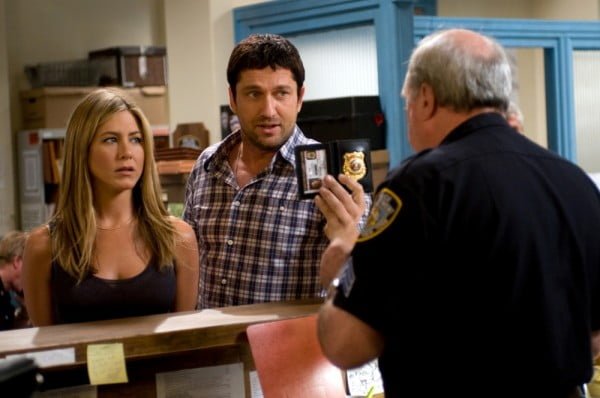 Jennifer Aniston and Gerard Butler in The Bounty Hunter

Summer is such an uplifting time of year. Between the endless days, and all the joys of being outdoors in the fresh, warm air, it’s a wonderful season. This week I’m also recommending you get as much of that fresh air as possible since there is very little reason to sit down for either of the new home video releases.

Arriving on DVD and Blu-ray today; Gerard Butler and Jennifer Aniston star in the action romantic comedy, The Bounty Hunter; and a young couple faces trouble from their parents in the slapstick romantic comedy, Our Family Wedding.

From the director who previously brought us Hitch, Fool’s Gold, and Sweet Home Alabama comes this zany romantic comedy that stars Gerard Butler as Milo, a bounty hunter who picked up the enviable job of tracking down his ex-wife and taking her to jail. With Jennifer Aniston playing Nicole, Milo’s ex, the duo will play chase across the city as a murder cover-up explodes around them, leading a number of thugs to their trail.

Far-fetched, silly, and predictably offbeat, The Bounty Hunter was essentially a flop in theatres. The only big buzz that it got was for the one thing it had going for it: it’s stars. Andy Tennant’s film is simply coasting on the obvious eye candy, and their general star power, while the trailers focus on the film’s hijinks, rather than the actual plot.

Although the film failed to bring in many fans at the box office, there is a potential that the film could get an audience on DVD as people look for new movies for quiet time at home. Based on the reviews of The Bounty Hunter, I’m still not sure it’s worth even a rental.

Rottentomatoes.com ranked the film at a mere 8% fresh, and top critics rated it at just 4% fresh. As David Denby wrote in his review for the New Yorker, “Even considered as no more than an assembly-line Hollywood product, The Bounty Hunter falls well below factory standards.”

Most critics pointed out a much bigger problem with the film though, and that is the fact that neither Butler nor Aniston have been particularly entertaining in recent romantic comedies, and The Bounty Hunter is no different.

“Inexplicably, Butler continues to get work in romantic comedies despite his limited range and boorish persona,” wrote Andrea Gronvall for the Chicago Reader.

And as Betsy Sharkey wrote for the Los Angeles Times, “When it comes to Aniston, maybe it’s simply time to settle and stop asking her to be The Good Girl anymore — perky just might be as good as it gets.”

Also landing on DVD and Blu-ray this week, director Rick Famuyiwa’s Our Family Wedding debuts with the story of one couple’s family feud that erupts when they announce that they are getting married.

America Ferrera and Lance Gross star as Lucia and Marcus, an average, young couple who decide to tie the knot after they graduate from college. The problem for their two headstrong fathers comes down to family issues and cultural differences: one family is black, and the other is Hispanic.

They also have different problems of their own. Marcus’ father, played by Forest Whitaker, is a divorcee with a playboy attitude, while Lucia’s parents, played by Carlos Mencia and Diana-Maria Riva, are trying to spice up their marriage.

As the weeks fly by leading up to the wedding, chaos reigns, and the couple deals with all kinds of issues as they try to bring their parents together.

Offering lots of hijinks along the way, the film is a slapstick romantic comedy that has many heart-to-heart moments, but ends up maybe overshadowing the romance just a few too many times.

“You almost miss the laugh track,” wrote Roger Ebert for the Chicago Sun-Times. “Difficult problems are sidestepped, arguments are overacted, and there are three food fights involving wedding cakes.”

While Lisa Schwarzbaum of Entertainment Weekly wrote, “Be prepared to swallow a lot of empty-calorie jokes in which blacks and Latinos insult and misunderstand one another in a spirit of vigorous buffoonery before dancing together in maniacal harmony during the never-in-doubt wedding-scene finale.”

July 20
Cop Out
The Losers
The Runaways