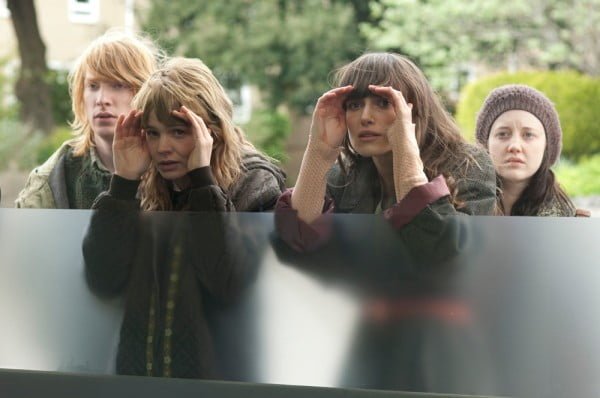 Carey Mulligan and Keira Knightley in Never Let Me Go

Opening this week in theatres: Carey Mulligan and Keira Knightley star in the emotional drama, Never Let Me Go; Oliver Stone returns to direct the sequel to his classic 80s film, Wall Street: Money Never Sleeps; plus a look at Legend Of The Guardians: The Owls Of Ga’Hoole and You Again.

Walking into Never Let Me Go, which premiered at the 2010 Toronto International Film Festival, I knew very little about the film, and that was probably the ideal situation, but it’s not a film that keeps its secrets particularly well. Maybe it doesn’t really need to though.

Set in the English countryside in what could be decades past, or maybe yesterday, the story follows three young friends at a special private school where the children are being raised for a unique purpose that is not very clear early on.

Powered by wonderful performances from the entire cast, both old and young, and with music, pacing, and cinematography that add mood to the film’s emotional story, Never Let Me Go is a frequently moving tale that falls just short of perfection. In fact, the film’s greatest flaw is that it deals well in building mood and mystery, and Mulligan shines in this heartfelt and tragic story, but the film anesthetizes the story’s weight and poignancy. As a viewer it’s hard to watch these humans act like their lives are predestined to end so early without wondering why they don’t try to run away, or fight the injustice of their society. Why are they so different? How can they be emotional for each other, and yet be detached from their own lives?

While I had some trouble with those moments in the film, I still have a hard time faulting Never Let Me Go. Director Mark Romanek brings the film’s emotions and mood to life with skill, and Mulligan is simply wonderful. She has already proven herself as an actress, but I think it is solely her performance that makes this film so powerful in the end.

Michael Douglas returns to one of his most well-known roles in a film about corporate greed, and where it has come over the last two decades.

Reprising his role as the corporate schemer Gordon Gekko, the film picks up as the Wall Street trader is released from prison and tries to warn the American financial market that it’s headed for a crash. Of course, no one is willing to believe him, and as he tries to deal with this he is also trying to make friends with his daughter Winnie, played by Carey Mulligan.

Meanwhile, Jacob, played by Shia LaBeouf, suspects that his Wall Street mentor’s death was somehow caused by a hedge fund manager, but he doesn’t know what he can do. When he goes to Gordon for help, the former convict agrees to help him with his problem if Jacob will help him get close with his daughter again.

Reviewers and critics have both praised and assaulted the film, which is a rare sequel for director Oliver Stone.

Roger Ebert of the Chicago Sun-Times was one of a hand full of critics who gave the film a good review, but even he points out one of the film’s flaws. “It’s an entertaining story about ambition, romance and predatory trading practices,” Ebert wrote, “but it seems more fascinated than angry. Is Stone suggesting this new reality has become embedded, and we’re stuck with it?”

Based on Kathryn Lasky’s series, Guardians of Ga’Hoole, Legend Of The Guardians: The Owls Of Ga’Hoole is a 3D animated adventure film about a young owl, voiced by Jim Sturgess, who discovers that the wonderous guardian owls that he has always heard tales about are actually real. When he’s captured by one of the enemies of his home, the Pure Ones, the Guardians must be brought together to fight against the owls who would destroy their way of life.

Written by John Orloff and John Collee, and directed by Watchmen helmer Zack Snyder, Legend Of The Guardians will entertain most younger audiences and families, but it has received below-average reviews.

Carrie Rickey of the Philadelphia Inquirer wrote, “After its soaring beginning, Guardians of Ga’Hoole plummets to more generic ground. It’s well-made, but how can you care about its owl heroes and villains when you can’t always tell them apart?”

Jason Anderson of the Toronto Star was much more positive about the film though. “Despite the odds, Legend of the Guardians: The Owls of Ga’Hoole may be the season’s most dramatically compelling and most visually sumptuous animated feature,” Anderson wrote. “Who could have predicted that?”

Lastly, receiving the worst reviews of the week, Kristen Bell stars as a budding PR professional who heads home to discover that her brother is marrying her high school nemesis, played by Odette Yustman.

At the same time, the duo’s rival mothers, played by Jamie Lee Curtis and Sigourney Weaver, have to come to terms with their feud, and deal with their children’s rivalries as well.

“A parallel track for two generations of women to play out petty grudges and pratfall their way through the mud and muck to the inevitable group hug,” wrote Glenn Whipp for the Los Angeles Times.

While Andrew Barker of Variety commented, “Those bemoaning the lack of quality female roles in modern-day Hollywood will find a key cause celebre in You Again, which manages to squander three generations of formidable actresses.”