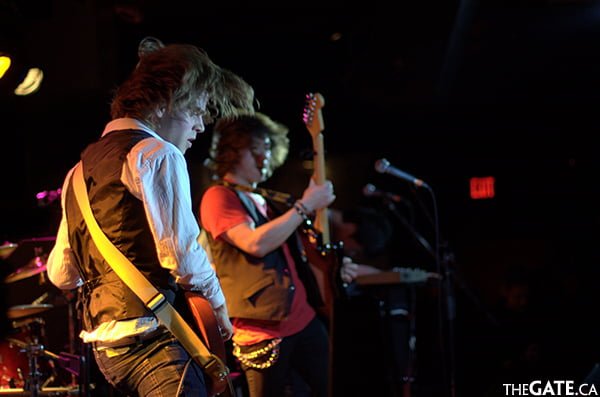 Isle of Thieves at the kick off party for CMW 2009

The night is still far from over, but it’s official: I’m done with my ninth Canadian Music Week, and it was one of the best to date. Hardly my usual marathon of venues, but I feel like I saw just enough this year, without overloading on acts I’ll never remember.

Things started out on Wednesday night with the opening night party at Tattoo Rock Parlour, where I caught Isle of Thieves, followed by Songs From A Room.

Considering it was supposed to be the kick off party, I was a little disappointed in the venue and the lineup. Tattoo is a pretty small space, with not much in the way of class for live acts, but I will say that Songs From A Room blew me away. They are a fantastic rock outfit, and worked the tepid audience for all their worth.

(Isle of Thieves were good, and I’ll make a mental note of them for future reference, but they’re still young and generally need a bit more work before I’ll be blown away.)

Jumping forward, the second night of CMW took me back to my usual haunt – namely, Lee’s Palace. I actually hate that I always end up here every year, but that said, the space is great, and it has to be one of the city’s best venues (even if it does need a little work).

As I said, I took it pretty easy this year, so the only two acts I caught Thursday at Lee’s were The Novaks and The Waking Eyes, but were they ever incredible. 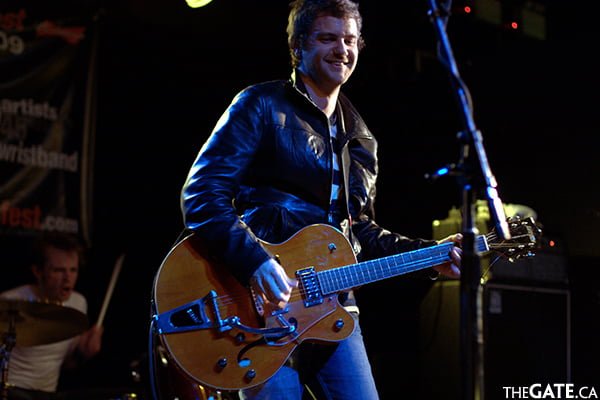 Mick Davis of The Novaks

The Novaks, in particular, surprised me because I had heard of them before, but didn’t realize just how good they were. Lead singer Mick Davis has what I can only call a classic stage presence, and he also happens to be one of the better guitarists I’ve ever had the pleasure of watching, especially during Canadian Music Week. With a new album in the works, I can only hope these guys from Newfoundland will be back in town for more – and soon.

Otherwise, The Waking Eyes were, well, freaking incredible, as always. I’ve seen the band once before, and followed them for a while, but they never cease to amaze me. This comes partly from the fact that the band just meshes so well on stage, and brings amazing energy to every song. They also have a really fantastic catalogue of music that plays well on stage.

While I’m not a fan of Chum’s radio station, and I wasn’t sure how’d I’d like the lineup, I was once again really impressed with the performances. Maybe the open bar helped, but from the beginning Chum picked a really admirable group of singers, even if it did lean heavily on pop-friendly pop vocals.

Serena Ryder and Katy Perry really stood head and shoulders above the rest of the crowd, particularly in Ryder’s case, giving a performance that had me clapping like a maniac at the end of every song. 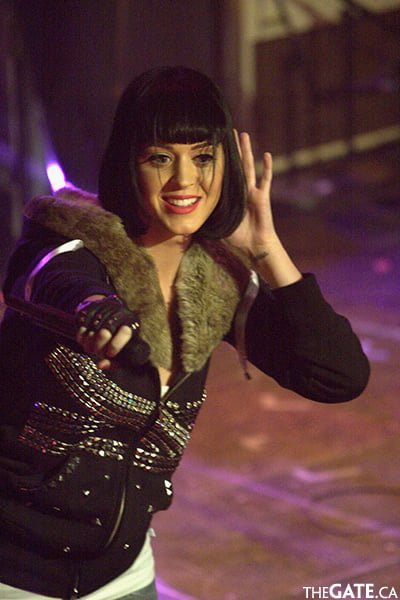 Perry also surprised me as being both a feisty performer, who also seems to really care about the whole audience reaction. That kind of surprised me, but she puts on a great show, and does the whole “I Kissed A Girl” routine, complete with a peck for one lucky woman, and a blow-up lipstick that she made a couple of girls kiss.

That said, the only oddity was Shiloh, who put on a really weird set.

This is a 15-year-old girl, who can certainly sing, but she was made up with almost a mask of white makeup, and she was dressed like she wanted to be a dancer in a bad 80s pop video.

I really like her song “Operator,” and I’m betting she will do well in the months to come (her debut CD should arrive this fall), but yeah, she is kinda weird.

Clearly, I’m not in her target audience anyway, but I dread to think of a resurgence in pop/goth makeup among the teen set.

Putting that behind me though, I finished the night, which brings me to tonight’s lineup (that would be Saturday), and the Indie Awards.

After some debate I ended up down at the Royal York for the Indies, which were handing out awards to the independent music community for the ninth year (I actually attended the inaugural event the first year I covered CMW).

The big deal for the night was that metal heads Anvil were presented with the Hall of Fame award, and Crystal Castles closed the night with a big performance.

Now the problem is that, while I get that Anvil were a pretty big deal for metal and hair rock fans, were they really influential enough to deserve to be in the Hall of Fame? I wasn’t blown away with their eager but grating perfformance, but I suppose the rockers out there must be rejoicing or something.

The real highlight for me was seeing Lights again backstage (she was too busy for an interview at the time), and best of all, the Arkells on stage for a half-hour set.

These guys are consummate musicians, with a ton of great material, and lead singer Max Kerman has a way of riling up the audience that is really fun to watch. There is also no mistaking the influence of their home town of Hamilton on their music.

Maybe it’s weird to suggest that they sound like a southern Ontario rock band, but it really is unmistakable if you ask me.

Finally, I left the Indies and headed up to Lee’s Palace, again, for one visit: the wonderful Basia Bulat. She is easily one of my favorite new Canadian singers, and when I arrived she was luckily just starting her set. I settled in for her eccentric set list by this London (Ontario) singer who recently made her mark with the wonderful hit, “In The Night,” and her Polaris Prize nomination.

As the first live set I had ever seen her perform, I was definitely not disappointed, and despite a few little technical issues, she put on a stunning show that had the whole crowd riveted to her every word. (She also hinted that a new album is in the works, so I’m already excited about the new song she sampled for the packed crowd.)

And thus ended my four day extravaganza at this year’s Canadian Music Week. I have loads of photos to post still, but hopefully you enjoyed the samples I provided here for now. Stay tuned full galleries from each night as I post them over the next couple of days, and make sure to check out these artists, who rocked CMW 2009: