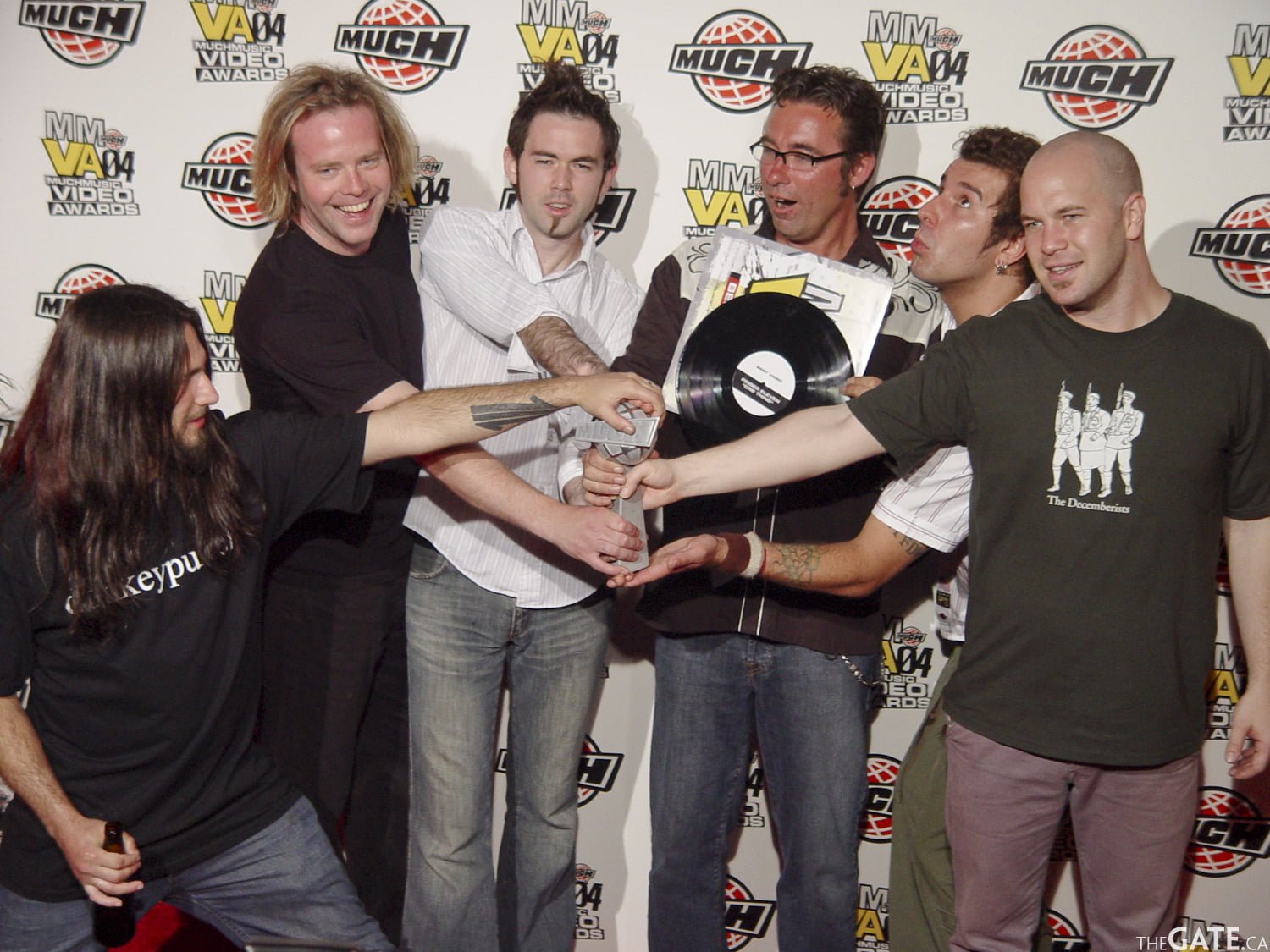 I look at my clock, standing in my bra and underwear while ironing my shirt of choice. I have ten minutes before my ass, wrinkled or not, needs to be on a bus. There is definitely something to be said about an award show where you can throw together an outfit just hours before attending. And this, I learn is the magic of the MMVAs. Ultra class yet casual, ultra smooth yet laid back. You get to mull around eating burgers and crab cakes, perogies and fried zucchini. Free beer? Got it. Free wine? Got it. Free vanilla ice cream in a waffle cone with grilled pineapples, grilled bananas and drenched in caramel? Got it. The MMVAs is a fine dining experience and better yet you’re reaching for the ketchup at the same time as Sarah Slean.

The awards itself start off with a bang. The Beastie Boys take to the stage and are veterans for a reason. Not only for their catchy music, but for their showmanship. These boys know how to play to a crowd. Hamming it up for the audiences on all sides of the stage, no one feels like they have the bad seat in the house. I am sufficiently pumped and ready to head inside to watch one of my favourite new Canadian artists, Fefe Dobson, perform in the Much environment. Fefe is bouncing around in an attempt to warm up. Watching her I am disheartened. Maybe it’s nerves but the girl doesn’t crack even one single smile. She seems detached, far from thrilled at being there. I brush off my disappointment. No worries, next in the environment are my boys, my loves, my essence of Canadian Rock – Finger Eleven.

My heart starts to ka-thunk during set change.

Andrew is off and away snapping photos of Mr. Kanye West in the pressroom, but my heart belongs to the former Rainbow Butt Monkeys. Waiting for their set to start (is one song considered a set?), I am poked and prodded by a group of teenage fans cooing over my wristband. “Oh god, you’re so lucky”, “whoa you must be important.” Yes, I must be. One even says, “I’ll give you fifty bucks for it” and the boy who thinks it’s cool to stick up his middle finger in every shot says, “Stupid. She’s probably getting paid more than that just to be here.” Am I? I should talk to my editor. I just smile politely. They can think whatever they’d like.

As soon as the boys take the stage I am smitten. James Black tunes his guitar and glances back at me. I smile. I have met them four times already and I know I’m no more familiar today than I was any day before. Scott Anderson comes out and he looks nervous. Scared and sweating. I want to hug him. The award before their song is Best International Group Video and as the nominees are announced James bobs his head to “Hey Ya” and I laugh. Scott is prepping… inhaling and exhaling deeply, fiercely pushing all of his air out and sucking in his cheeks. I am mesmerized. I have never seen anything like it… as a fan it’s hard to describe the vulnerability and closeness you feel when you watch an artist warm up. The song moves me in no less of a way. They play “One Thing” which didn’t impress me as a single, but which makes my night… so far.

When the song is over I reach my hand out and say, “Nice set, James,” touching him on the shoulder. “Holy Shit. You just touched him and knew his name,” says Jealous Girl #1. I wave good-bye (with my wristband hand) and go off to find Andrew. Instead I walk (nearly) into Scott. I know I have to talk to him. 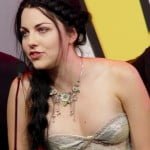 I know I can talk to him, I’m press! So I garble off this and that – “How does it feel to perform here?” (“It feels good now that it’s over and my night can really start”). “Was the song choice your own?” (“I’m pretty sure they asked us to play ‘One Thing’, which was cool because I feel like our harder stuff doesn’t translate well onto television”). “Are you looking forward to Edgefest?” (“Um, yea, I mean we’re looking forward to getting drunk with Billy Talent!”) Throughout our conversation, Scott is ushering me out of harm’s way. (I seem to have planted myself in a direct path of stage crew moving amps and drum kits.) This involves a lot of him touching my shoulder. A lot.

Though Scott gives me complete answers and is totally attentive, he seems mildly pre-occupied, glancing over my shoulder. I later learn they were minutes away from winning their Best Video Award and he was waiting to be called away. Always a gentleman, always a pleasure, always a heart-throb. Not many bald men do it for me, but Scott Anderson… . I think it’s the smile. I think it’s the sincerity. I think it’s because even with the wristband he knew I was more public than press and still gave me attention and respect which makes him the coolest celebrity I know.

After our brief run in I rush to the pressroom. Lo and behold the first people ushered back there are Finger Eleven, fresh from their win. I gush about how watching them warm-up is such a powerful experience (they give me a surprised, yet flattered look) and what is going through their heads right before the crucial moment of contact with an audience. James laughs and says they mostly worry about screwing up-especially when it’s televised because then their mistake will live forever.

Soon after in skips Simple Plan, full of energy and store bought pop-punk. I’m not crazy about their music, but they seem like cool, down-to-earth people so I decide to ask them a question. I wonder how important it is for them to visit a city they’re in, do they like to explore the places they play. Shamed to admit I don’t really hear their answer because at that moment Evanescence comes in, still sweaty and anxious from their performance of “Everybody’s Fool” which ended just moments ago. I don’t get to ask them a question but it doesn’t much matter. I am sitting less than fifteen feet away from Amy Lee. And in all truth she is just as beautiful in person as she appears in videos and magazines. Sadly she is also as unfriendly as she appears. Polite surely, but not overly gracious. Maybe she’s just tired.

She says it’s not about commercial success for them but instead the success of being true to yourself and your art. I have heard this sentiment from her in every interview I have seen (or read) them do. She says she is inspired by Bjork and Tori Amos and even Korn (everyone is allowed one musical faux pas I suppose.) She says when she writes songs she gets into a “funk”, barring herself up for days at a time in her home (but yes still eating and bathing as someone thought to ask). She steers clear from any talk about a relationship with Seether’s Shaun Morgan, but does mention the pleasure of appearing on their new album, Disclaimer II. The rest of the band doesn’t say much at all.

When the celebrities have flown the coop to after parties or homes or planes I capture the moment with a photo in front of the official MMVA back drop. I am all smiles. I have only two regrets of the evening. The first, not catching Kanye West’s performance of “Jesus Walks”. Upon seeing the awards from the comfort of my home (on one of the 10 million repeats) it is clear this was the best of the night. The man commands a presence and an element of style not expected or previously delivered in the casual atmosphere of the MMVAs. George Stroumboulopoulas says Kanye West, “took the MMVAs to a whole other level.”

My second regret? Not asking Scott Anderson (or Amy Lee for that matter) to marry me. 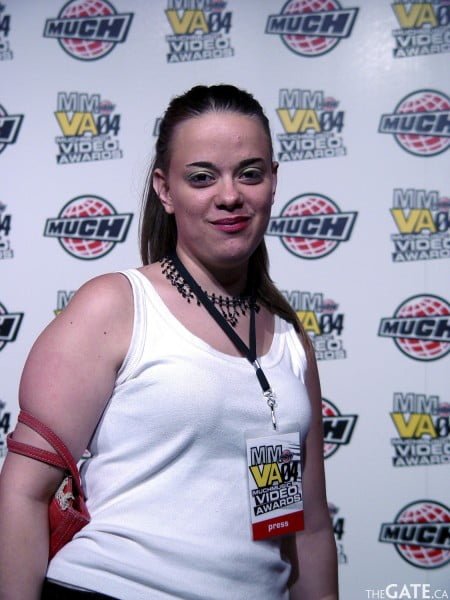