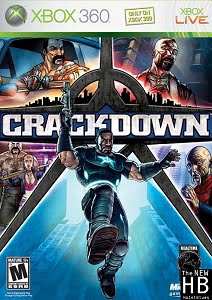 Gang warfare comes to the Xbox 360 but in Crackdown the thugs aren’t fighting each other – they’re fighting to survive a brutal police force led by one cloned super-cop – and of course, that would be you. Your job is to take the streets by storm, kill every gang member that you meet, and then destroy the gang leaders so you can make the city safe again. If it sounds just a bit like an old coin-op game, you wouldn’t be far off, which actually makes Crackdown a heck of a lot of fun to play.

In the game you can drive any vehicle, pick up any weapon, and get stronger as you fight each gang. If you get tired of killing off the bad guys with a gun, you can storm in and beat them out of their misery. Still not your thing? Pick up a car, or a cement barrier and crush the enemy. About the only thing that can’t be destroyed in Pacific City is the buildings – everything else is fair game.

As you play your skills will improve – each time you kick something you get stronger, when you shoot a bad guy your aim improves, and even your driving skills improve as you take to the wheel. The only thing you have to work a bit harder for are the agility and secret orbs, which are hidden throughout the map. There are 500 agility orbs scattered across the city, which enhance your speed and how high you can jump, and a number of secret orbs which enhance all of your skills, but tend to be harder to find.

The actual city is broken up into four regions: La Mugre, the Den, the Corridor, and The Agency. Situated in the centre of the map is The Agency, an island refuge where you can pick up a fresh supply of weapons, or a new ride to get you around the city. On the west side of the city sits La Mugre, the home of Los Muertos; on the north end of the city you’ll find the Corridor, where the Shai-Gen Corporation run the streets; and in the Southern end of the city is the Den where the Volk are in control.

In each part of the city you’ll find a new environment to explore, and destroy – which is actually the biggest part of the game. La Mugre is your typical inner-city environment, the Den is the industrial area, and the Corridor is a sprawling modern area with gigantic towers. Likewise the gangs all attack a little differently – Los Muertos have the fastest cars of the gangs; the Shai-Gen have bigger vehicles and better single-shot weapons; and the Volk have the best weapons – including rocket and grenade launchers.

Picking off each of the gang leaders in the areas is always a bit of a challenge, but the strategy tends to be a mix of caution and reckless determination. Early on, before you level up too far, it’s easy to pick off the enemy in each area and then go for the leader. As you progress though, you’ll need a different strategy since the enemies in each area will re-appear after a few minutes. The strategies are innumerable though, as you can approach each area from a dozen ways, and kill off the leaders in any way you see fit.

And best part is that if you get killed off you can just try again – there’s no limit to how many times you can regenerate. It tends to get a little annoying though when you’ve tried one boss a dozen times and keep getting blown away – but considering how many bosses there are, you can always mix things up and try another zone. The game narrator will tell you as you approach each boss what your chances are so you can decide if you’ve got a chance.

With Crackdown though, playing around the environment is some of the most fun you’ll have. Jump in a car and race against the clock, jump from roof-top to roof-top, or see how much devastation you can cause. In a lot cases the diversions can be more fun than the actual objectives, although seeing the bad guys go flying after you shoot a rocket at them is a lot of fun.

Crackdown will have you running around like mad, trying to kill off gangs, but there’s no doubt that the action can get tedious. I’ve played Crackdown now for a number of hours and although it kept my attention firmly rooted for well over 15 hours of gameplay, it is fundamentally too simple to be the kind of game you’ll want to replay a lot. Still, there’s no denying that Crackdown is one hell of an addictive game. Once you pick up the controllers you’re in for a lot of fun. The fact that it reminds me so strongly of old arcade games is really just a bonus. The only thing that’s vastly improved is the fact that you’re free to explore any part of the city and do anything at all.

Finally, you can play Crackdown with a friend via Xbox Live, but the maximum is two players total, so you can only play with one other friend at a time. My bet is that a sequel is already in the works and fans of this game will be able to enjoy a much bigger city (or cities?) in the future, along with a chance to play with more friends. As it stands though, Crackdown is ridiculously addictive fun that will keep you playing for hours.