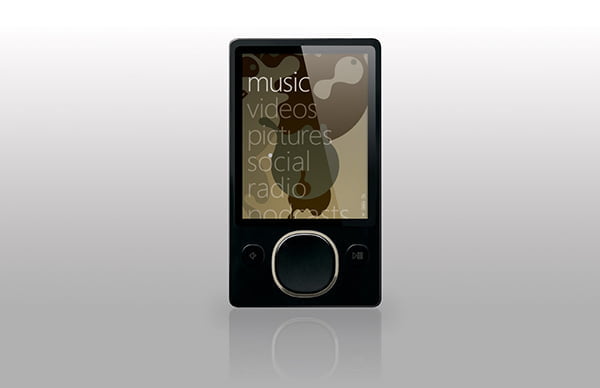 For the last two years, if you wanted to buy an alternative MP3 player that didn’t have a fruit logo on it, you were pretty much stuck with a few hard to find models with big price tags, and few extras. That all changes today, June 13, with the launch of Micorsoft’s Zune line of multimedia players, which is a stylish, fun entry to a market that is otherwise dominated by a single device.

Despite being available in the United States since the end of 2006, Zune has been a no-show in Canada, unless you decided to hunt for them south of the border. And let me stress the word hunt here. In the U.S. the supply of Zunes seemed to be few and far between following the launch of the second generation of the device, which includes the Zune 80 Gb model.

Even though the Zune is launching today, there is also a noticeable lack of fan fare about the device’s arrival in Canada. Whether that will change suddenly is yet to be seen, but it does not bode well since few people in Canada have ever heard of anything beyond the current dominating MP3 players, and marketing will be a key factor in changing that.

Since I have owned a Zune 80 Gb since Christmas of last year, I have some experience with Microsoft’s new arrival and I have to say that I can’t imagine a better multimedia player. It has a nicely-sized 3.2-inch screen for showing widescreen video, the 80 gigs of space should easily take most people’s entire music collection, with room for video and photos on top of that, and the Zune is wireless enabled so you can synchronize with your computer and share music with other Zune owners. You can also hook the device up to a TV, with the right cable, to show off video or pictures.

Looking at the display, the surface of the screen is incredibly resilient, and the screen format changes – either upright for music and pictures, or sideways for video. The menu is simply laid out with seven main options: Music, Videos, Pictures, Social, Radio, Podcasts, and Settings. You can also customize the background image to suite your style, and you can change settings to make the screen brighter or darker.

The whole device weighs 4.5 ounces, and is 2.4 inches wide, by 4.3 inches tall, and half an inch thick. There is a lock button at the top of the Zune, and then just three controls on the face, under the screen: a back button and a play/pause/power button, situated on either side of the incredibly clever little touch sensitive button. With touch sensitivity on you can slide your finger in a direction to browse your music or fast-forward, and alternately you can press the button in a direction to skip tracks.

In terms of menu options, I have to admit I spend most of my time listening to MP3s or watching videos, but the included radio and podcast features are both decent. We’ll look at podcasts a bit more when we look at features of the software, but in terms of the radio you can pre-set stations you like, or scan for them, and the Zune picks up station identifying information, if it’s being broadcast.

Going into your music, you’re presented with a number of ways to browse tracks – by artist, song, genre, and finally, by playlists. Scrolling through songs, you can then select an item by pressing down on the middle of the button, which then gives you options to play the song, add it to a “quick list” playlist, or send it wirelessly to a nearby Zune. Otherwise you can randomly start playing any genre, artist or albums by selecting the play all tracks option at the top of any grouping of tracks.

Under video, files are sorted alphabetically under genres you can set within the desktop software. If you stop watching a video the Zune also remembers where you stopped watching so you can resume at the same point when you come back to the film or TV show.

There is more to the Zune than all of that, but those are the core elements worth noting. I have as yet not been able to experience song sharing, since no one I know has a Zune, but it is supposed to be simple and gives the recipient three plays of a song before the track expires. There is also a lot of talk about Zune and Zune Social becoming a lot more interactive, with comparisons to elements of Facebook, but that remains to be seen.

One other notable element of the Zune is the fact that it has no equalizer to customize sound, but it’s a feature that I haven’t found necessary since the built-in system reproduces sound very well. 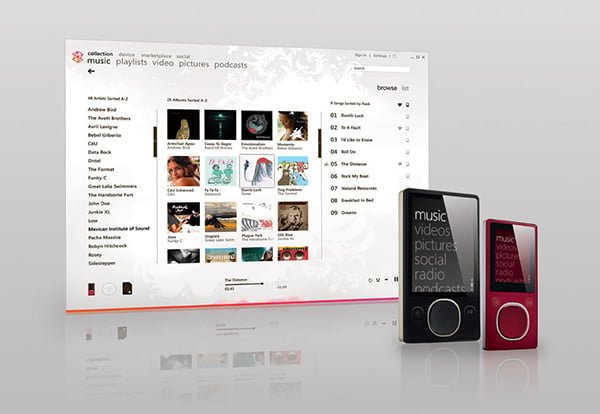 Now, here is where we come down to the one annoying thing about the Zune, and that’s the Zune software. Like other devices, synching the Zune requires software and while it has improved vastly since December, there is still room for improvement in some areas.

Inside the software you can pick what folders you want the system to watch, and it will find new compatible music and video, which lets you either synchronize the whole contents of your computer, or choose what folders you want added to the device. Most common audio files will work with the Zune, but picture support is limited to JPG, and the only video files recognized are WMV, MPEG-4, and H.264 – which will usually require you to convert your video to a supported format before you can synchronize it. With the right settings though the video quality is very good, but as with any screen device, dark scenes can be hard to watch if you are in bright conditions.

The biggest limitation of the software that I found was that it didn’t always find the right cover art for music, and it was hard to get things into the right genres as well. The best solution was actually to manage my music through Windows Media Player, make sure everything is set to the right genres and artists, and have it set to write those changes to the music files. (It’s an annoying extra step for anyone with a large library of music that is not properly sorted, but my suspicion is that Microsoft already has too many issues with unfair competition, and had to keep the Zune distinct from Windows Media or face legal action once again – I’m just guessing there.)

Building playlists was likewise limited, but a recent update to the software meant that I could create auto playlists based on a few fairly versatile settings, like rating, genre, artist, or when the music was added.

Looking at podcasts, the software is pretty simple here – all you have to do is go to the tab in the software, add the URL to the podcast’s RSS feed, and set how many episodes you want to synchronize. The software does the rest, and each time you connect the Zune it will add the latest episodes – which is the same way the system works for new music in synchronized folders.

Last of all, for anyone who wants to work the social aspect of the Zune a bit more, there’s the online Zune Social. You can create an account for the Zune site that will basically share your music plays with anyone who wants to see it, and you can add friends to the site as well. Every time you connect your Zune and run the software, updates are sent to the website with your latest listened to tracks. Compared to Last.fm, the site looks very good, but it isn’t nearly as functional and Last.fm users may also be saddened to hear that there currently is no way to scrobble tracks to the popular social site.

Zune is already available in stores as of today, and the 80 Gb model retails for around $250 in most stores. A number of accessories are also available, including cases, and docking stations with built-in speakers. Some accessories for other MP3 players, notably video cables and some docking stations, will also work for the Zune, but it’s best to double-check that before buying anything.

Find out more about Zune at the official website – www.zune.ca.