Amazon deserves serious credit for their fourth generation Kindle Fire tablets. From the price, to the features, and the overall design, the new Kindle Fire tablets offer a fantastic experience, particularly with the beautiful, light, and fast Kindle Fire HDX 8.9″–a tablet that is quite simply one of the lightest, fastest, and best-looking tablets on the market.

Starting at $134 for the 6″ tablet, and going up to $399 for the Kindle Fire HDX 8.9″, the Kindle Fire tablets are essentially budget-friendly tablets that perform far better than most other affordable tablets.

Comparing the two devices, Kindle’s Fire HDX 8.9″ tablet is worlds away from the Kindle HD 7″ tablet. The HDX 8.9″ has a different button setup, it’s lighter and has a much better display, and even the case works differently, with the tablet pushing up out of the case so you can take a picture with the rear-facing camera.

The only drawbacks, that deserve serious thought, is the fact that Kindle only works with the Amazon Marketplace, which seriously limits the number of available apps, and on top of that there is also no expansion port for adding storage space. Additionally, the cameras on the devices fall short of anything special, with the HDX 8.9″ offering an 8MP rear-facing camera that works poorly indoors unless there is a lot of light, and even then most images are fairly grainy with some colour issues as well.

Before the rest of the complaints though, here are a few specs and details on the Fire HD 7″ and the impressive HDX 8.9″.

Kindle Fire HD 7″
Priced under $200, the Kindle Fire HD 7″ is a little thick, but it is incredibly portable–fitting in to a small bag or a purse for easy travel, while still offering good battery life, decent processor power, and quality graphics. The Dolby stereo speakers also make the tablet a great option for playing music on the go.

The base model offers 16 GB of memory, but since there is no slot for adding cards, it’s worth considering how much space you need. The Kindle Fire HDX 8.9″ 32 GB retails for $449, if you need a bit more space.

Accessories
Kindle’s Origami cases start at $44 for polyurethane, and they are highly versatile, folding to stand the tablet up portrait or landscape. They also come in leather, but for the value, the polyurethane is a good deal. There are also keyboard cases available, or you can pair a multitude of Bluetooth accessories with the tablet, include most Android-compatible speakers, headphones, or keyboards.

Amazon Appstore
Ultimately, any review of the Kindle Fire comes down to a review of the Amazon Appstore, and that’s where the tablets come up very short next to just about any other Android device. This failing is, in fact, the element that should make any consumer seriously consider what they want from their tablet.

While standard Android tablets have access to the Android Market store, Amazon has hobbled their Kindle devices by restricting them to the Amazon Appstore which has a very limited selection of apps. While you can find Facebook, Twitter, Evernote, Netflix, and about a dozen or two other big-name apps, the rest of the app store is lacking, to say the least.

For example, none of Google’s apps are available in the app store, and that means no access to Google Drive, Google Play, or anything else. Likewise, the selection of games is astonishingly weak, with only a few titles that even seem worth installing. DomiNations is a phenomenal game, and it would look great on the Kindle Fire HDX 8.9″, but it’s simply not available in the Amazon Appstore because it hasn’t specifically been submitted by the developers to Amazon’s store.

If you need proof of how desperate the situation is for Kindle Fire users, just take a look for yourself. Even the few titles that seem worthwhile have less than a dozen reviews when browsing on the Kindle Fire HDX 8.9″. As just one example, Angry Birds Free has just 9 reviews when I open the Appstore from my Kindle, while Shazam has 21 reviews. As far as I can imagine, that number is limited to reviews for the app for my particular device, but whatever the reason, it’s a little shocking.

The Bottom Line
So, should you buy a Kindle Fire? That’s ultimately a question only you can answer. I was fairly disappointed by the lack of apps and games in the Amazon Appstore, so for me the tablets feel a little useless. I use my tablet to read email, browse the web, and for simple apps like Tumblr, Twitter, or even Evernote. Even Trello is pretty good on the Kindle Fire, but where is Instagram? Not having any Google apps means there is also no YouTube app, and I consider that a huge failing as well.

That puts my vote–for now at least–under the “do not buy” side, but I will happily admit that the apps are really one of the Fire’s few failings. These are spectacular tablets, but the devices are only as good as their apps. Against the standards found with Android and iOs devices–and their overflowing app stores–it’s hard to recommend an app store as barren as what Amazon has put forward for their users. 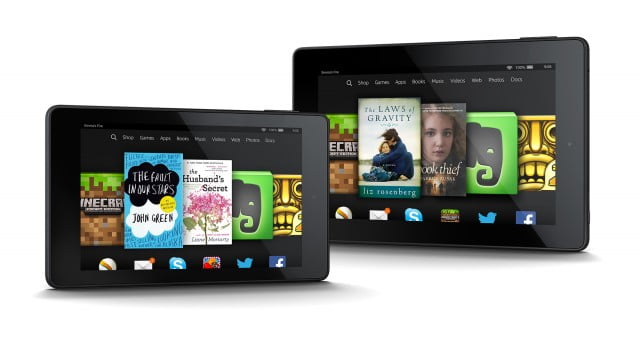