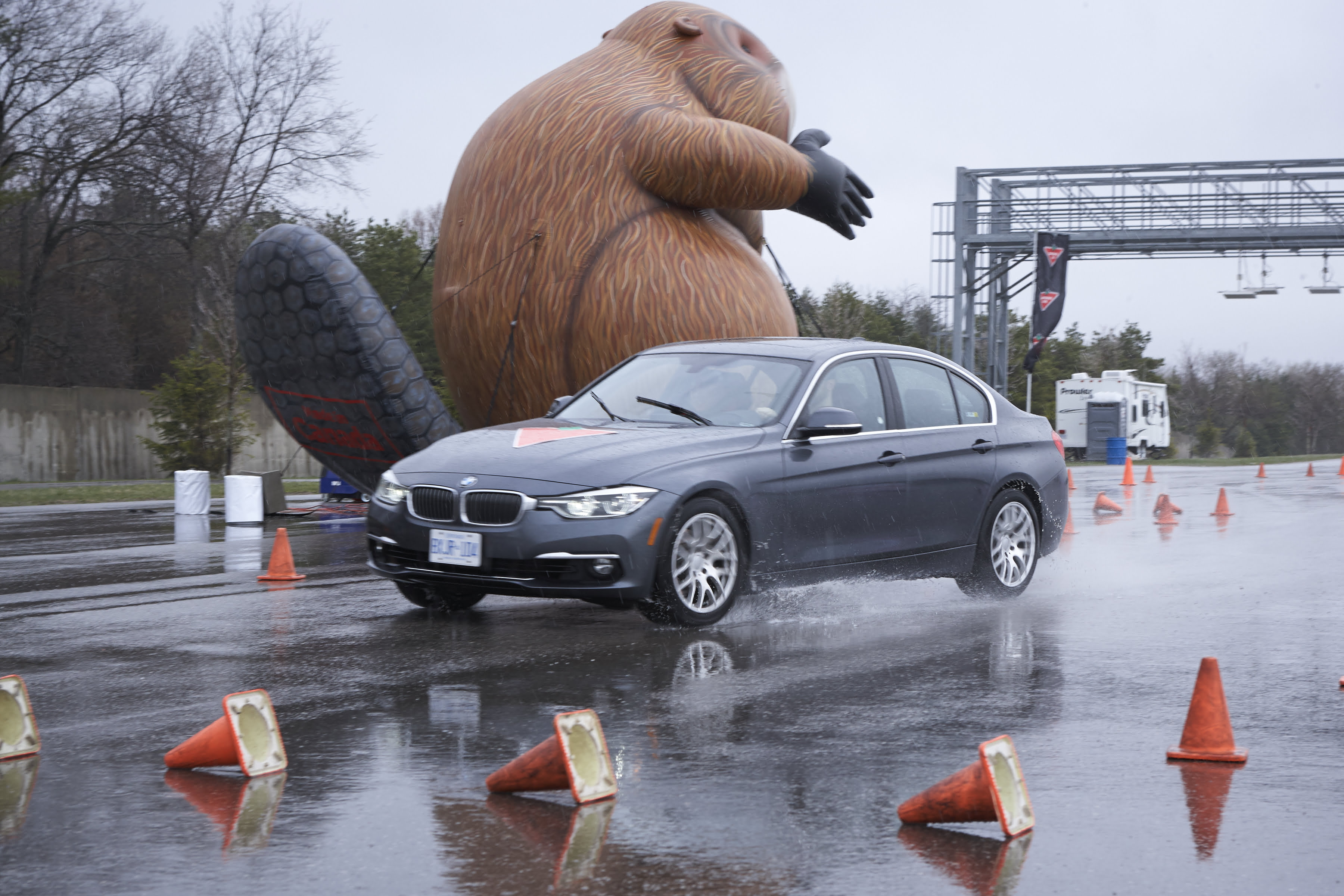 It was a rainy day at Canadian Tire Motorsport Park when I sat down behind the wheel of a sedan to try out the new MotoMaster SE3 premium all-season tires, and the conditions were perfect. And by perfect, I mean that it was rainy, cold, and just a little bit unseasonable.

To get a feel for what the new tires could do, I sat behind the wheel of a BMW 328i xDrive sedan, which had a competitor’s all season tires. At the start of the special course to test the tires, my co-pilot, as I liked to think of him, drove me through once, and then I took the wheel.

The first test was a simple comfort test, to see how the tires handled potholes, but next up he told me to slam on the gas, and only hit the brakes a few metres from a set of pylons, and then steer around the obstacle. The idea was to show off the stopping power of the tires, but let me tell you, it’s a shock to have someone tell you to slam down on the gas, even on a closed course, and then hit the brakes.

The first time through the course, in the competitors tires, the car and the tires performed well, but it took me two tries to really put the all-seasons to work. Despite the water on the course, and the curves, and quick stops, the tires were solid though. The check I had done on the car hadn’t put up an alert for the tires anyway.

The third time, with MotoMaster SE3 tires, and behind the wheel of an identical BMW, I was ready to really feel the difference. At the acceleration and ABS test, I hit the pedal as hard as I could, and then I slammed on the brakes just before the pylons and held the brakes as I turned. The tires performed beautifully, and the MotoMaster SE3s brought the hurtling vehicle to a stop, despite the rain and the speed, but they also seemed to grip just a bit better on the turn.

The MotoMaster SE3 tires also cushioned the impact of the pothole tests better too.

Likewise, the next test was an acceleration test around a turn, and the MotoMaster SE3 tires gripped better, and continued to perform better around the entire course–even driving around the giant inflatable beaver, and the wet-suit wearing diver playing a piano.

The competitor’s tires did their job on the wet roads, but the new MotoMaster SE3 premium all-season tires have a technological edge over them, and as per Canadian Tire’s motto, they’ve also been “Tested for life in Canada” thanks to consumers across the country. The tires perform better in most conditions, including wet roads, cornering, and stopping.

Michael Minialoff, the senior category business manager of tires and wheels at Canadian Tire got into the specifics with me before I went on the course.

“The MotoMaster SE3 is our best MotoMaster all-season tire ever,” Minialoff said. “We’ve put a lot of technology and materials into this tire that we haven’t seen before. The MotoMaster SE3 has a coupled silica compound, and the silica is actually hydrophobic–which repels water, and helps keep it in good contact with the ground.”

“It also has a couple of other features. It’s got a wide circumferential grove, so that’s a groove that runs around the length of the tire, and that’s going to give the water a place to go. So, in a deep puddle, it can channel the water away so the tire can remain in contact with the ground.”

The tires also feature advanced technology in their shape and design, including 3D micro-gauge sipes.

“Now the sipes are the little hair-line cuts in a tire,” Minialoff said. “Those give you good handling, and a good, comfortable feel, and the MotoMaster SE3 is our most comfortable all-season tire. The 3D sipes also lock-up. So if you’re extreme breaking, or making an extreme-lane-change type of maneuver, that tread block will actually firm up and give you that extra bit of traction that you need in that emergency situation.”

Canadian Tire can inspect your tires for you, if you go to an automotive centre, or you can find out how to test your tires on their website. It’s important to note though that your tires are considered legally bald in Canada when they’re at 2/32nds of wear, but even at 4/32nds of wear they won’t perform as well, and they’re near the end of the tire’s usable life, particularly in snow, slush, and water.

Watch a video on YouTube from Canadian Tire on why the SE3 tires are their best.