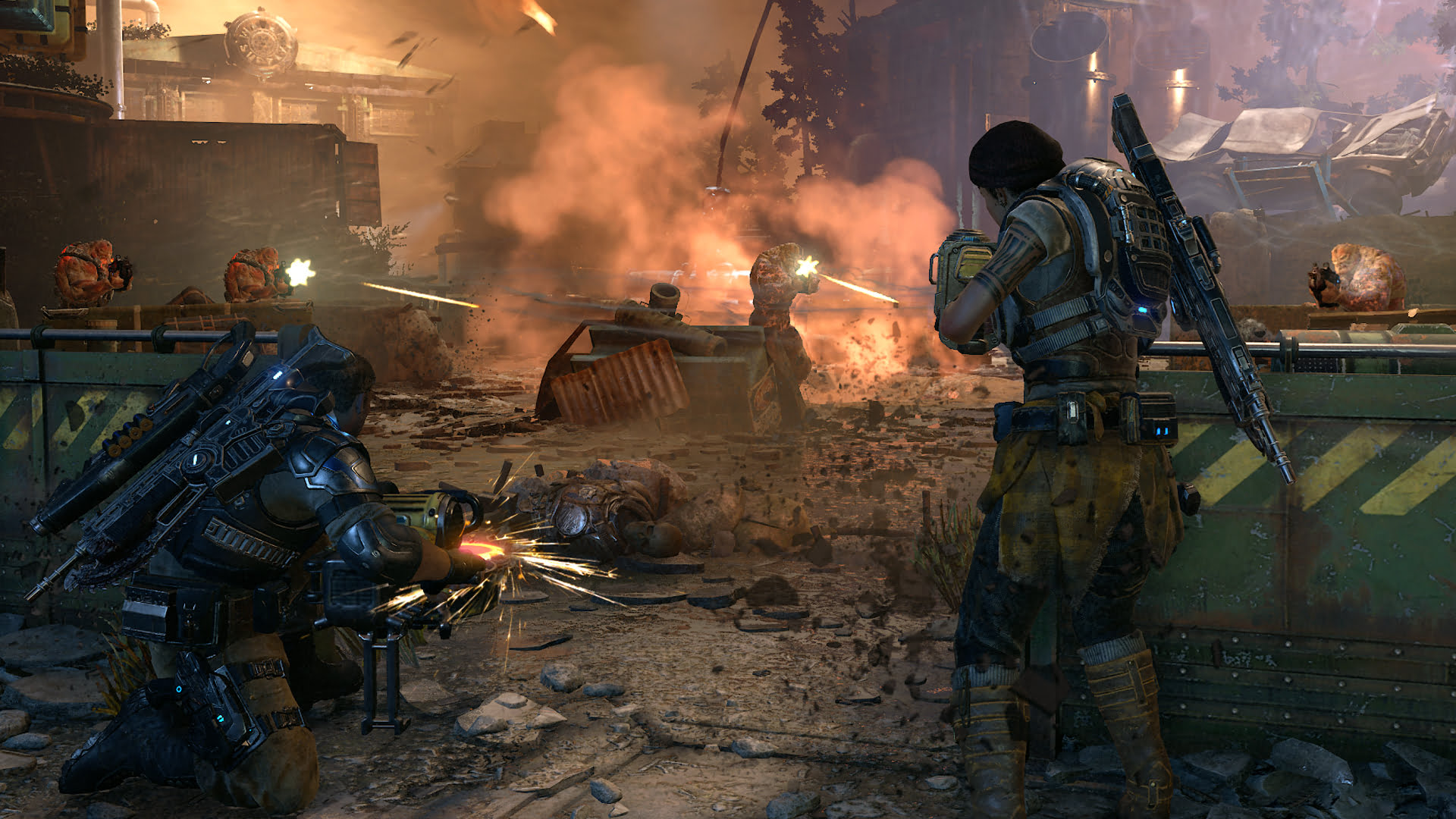 Microsoft took the press and public alike through the opportunity to go hands-on last week with their fall Xbox One lineup at the X16 Media Showcase event in Toronto. They had a full complement of first- and third-party titles set for release between now and December, with a handful of already available games to try out. I was able to play a number of the games on display, read on for my impressions.

There are a number of sequels out this year from well-established franchises. I played a small segment of Gears of War 4, the fifth entry in the series. It offered the same level of technical wizardry, with visuals ahead of most anything else around: detailed characters, cleverly designed play spaces set in a world recovering from war, and believable science-fiction weather and environmental effects. This Culminated in a lightning tornado on fire, demonstrating what Vancouver-based studio The Coalition can squeeze out of an Xbox One.

The next franchise-entry I played was Forza Horizon 3, the spinoff series to Forza Motorsport proper. Not just about high-end sports cars, Horizon 3 races trucks and off-roading buggies, too. Set in an open-world representation of Australia, the game takes you through long stretches of winding highway, coastal towns, jungles, and onto the beach! With over 350 cars, a wide variety of race types, and Playground Games proven dedication to detail, there’s bound to be something for every racing fan to love.

The last of the big sequels I tried out was Dead Rising 4. Frank West, star of the first Dead Rising, returns. Players are given the opportunity to wreak the series’ signature wacky chaos, destroying tens of thousands of the undead before the game is through. In the span of about 5 minutes, I racked up a kill count of several hundred. I overheard that the record-holder for X16 was over 3000. New weapons are introduced: an ice sword that freezes enemies in place before you shatter them to pieces, a zombie-cannon truck, and a powered exo-suit that makes Frank stronger. With the return of photojournalist Frank West, Capcom Vancouver also brings back the photography element from the first game – now with selfies!

I briefly played Final Fantasy 15, which stars 4 young men on a simple road trip to another kingdom. Their banter was surprisingly endearing, and the characters were charming. I liked the simple nature of the plot, which will certainly grow into a world-saving adventure. The action-oriented adaptation of traditionally turn-based combat has yet to hook me, though, and I wonder how longtime fans will feel about this.

Outlast II was also on hand, sequel to a horror game that had me screaming and jumping out of my seat every time I played it. In my brief time with the game, I definitely felt uneasy, and to my own embarrassment, leaped back at one moment. I don’t think anyone noticed! Still, it’s a good sign that even in a crowded, noisy, public game test, Outlast II still “got” me.

Ubisoft had their upcoming snow-sports title Steep on the floor, and I was not taken with it at all. There is a beautiful mountain for you to play on, and it gives you the ability to switch between skiing, snowboarding, parasailing, and wingsuit…ing any time you’re stopped. You can pick a drop-in point anywhere on the mountain at the touch of a button. It was impressive, if only from a technical standpoint. The gameplay fell flat for me. I was not particularly excited at any point, as I never felt a sense of speed or danger. It never felt like I had solid control over the character – it was stiff, and without a sense of connection to the onscreen action. Once, I deliberately tried crashing into trees, but even that led to a bland falling-down animation.

The highlights for me this year were some smaller titles. Cuphead was once again being previewed, a side-scrolling platformer with a gorgeous 30’s -style animation. The game looks like an old cartoon, Popeye and Betty Boop and early Disney. The way the characters move, the environments bounce around, and the way enemies react to being hit all works towards this style. The music reinforces it further. Cuphead is very challenging, and plays a lot like Contra in the best way. Move from left to right, shoot any enemies you see, don’t get hit. The option to play cooperatively with a friend almost always makes a game better. Cuphead with a partner is no exception.

Canadian Studio Tribute Games was showing their latest, a 2D exploration game called Flint Hook. It is their first Xbox One title, and has a beautifully animated pixel-art aesthetic. This is what we imagined games would look like in the future, back when we were playing on the Super Nintendo. It is fast and straightforward, with a neat mechanic that has you using a grapple hook for movement and combat. You swing around from point to point very quickly, and your little hooded avatar eagerly flips around with his cape fluttering behind all the while.

Finally, my Game of the Show, was ReCore, a 3rd-person puzzle-combat-platforming game built by the minds behind Metroid Prime, Mega Man, and one of the main Halo writers. Taking place in a bright and colorful world, and the mission on hand has you solving simple platforming areas, and clearing rooms of enemies, accompanied by several robot companions to help you along the way. I enjoyed how fast it moved, and really liked the challenge of figuring out how to manage and defeat a group of enemies. You need to switch the color/type of ammo you’re using to match your target, command and swap between your drones to put them to effective use, all while running and jumping around to avoid environmental hazards as well. The fluid movement, jumping and dashing around, is aided by a lock-on – your mobility isn’t hindered by combat, instead they elevate each other.

ReCore is due September 13th, and the rest of the games I played should be out by the end of the year on Xbox One. Combined with the recently released Xbox One S, and newly-refined controllers that you can custom-order with your own color design, this looks to be a pretty exciting end to 2016 for Microsoft and Xbox!