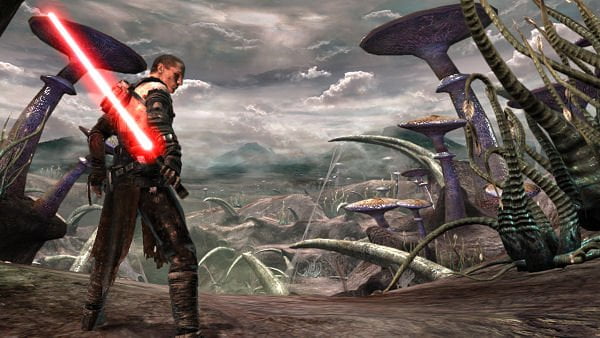 Star Wars: The Force Unleashed
For the Xbox 360

Picking up between the new prequels and the original trilogy, the game fills in some of the details about what Darth Vader was up to leading to the fight with the Rebels. Aside from a brief opportunity to try on Vader’s cape and helmet in the opening sequence, you take on the role of Starkiller, Vader’s secret apprentice, sent out to do his bidding across the universe.

In your missions you have to fight your way through swarms of enemies, including Storm Troopers, robots, strange monsters, aliens, and quite a few Rancors. Not to mention your primary mission, killing off the remaining Jedi who are still hiding around the universe. As the secret Sith apprentice to Lord Vader, you have at your disposal the usual light saber, and a selection of Force abilities, including Force Push, Grip, Repulse, and my personal favorite, Lightning.

Fighting through the levels you gain experience by killing enemies and collecting different holocrons which provide temporary boosts or skill upgrades. But the best part of the game is definitely in the way you wield your power.

Don’t want to slice your way through the enemy with the light saber? Pick up the nearest enemy and throw them against a wall. Or zap them with lightning. Or do both at once. As you upgrade your abilities, you’ll find numerous ways to kill the creatures stalking you, and the only problem becomes the tedium against certain enemies that are immune to some abilities. 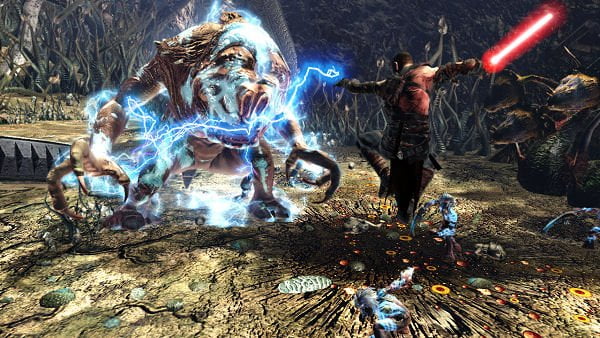 Surprisingly, the game’s storyline is pretty good. Aside from some bad voice work by replacement actors who take on established roles, the game flows really well, and offers an interesting bridge between the original films and the prequels.

The problem I had with The Force Unleashed was the incredibly restrictive gameplay, and the tedium that sets in half-way through the game. From start to finish the game only allows you to follow a set path, and as I mentioned previously, it gets incredibly annoying dealing with enemies that are immune to half of your Force abilities.

There are also numerous bugs that left me restarting a handful of sequences, including the final scene, multiple times.

In addition, most of the boss battles lack any imagination, and feel like you have to walk a very fine line to reach the end, which is pretty frustrating. The Xbox 360 game is also surprisingly short, which is baffling since there is plenty of extra game content available on the Wii version. Aside from a number of extras not made available on the PlayStation 3 and Xbox 360 version, there are also five fewer levels, which as you can imagine is a big difference.

Compared to the ultimate Stars Wars game (at least in my books), the incredible Knights of the Old Republic by BioWare, The Force Unleashed is technically an interesting game, but hardly stunning. The technical specs speak of a lot of work put into the physics of the game, which does translate fairly well into gameplay, but frankly this is the problem with most of the Star Wars “products” – not enough thought into the experience, and too much for the technology. More time should have been spent on developing levels, offering more powers, and opening up the game, especially since some of the physics they worked so hard on, don’t exactly translate that well.

Considering that I really don’t see myself replaying the game much at all, I’d recommend The Force Unleashed solely as a rental. I’ve only had my copy for a little over a week and I’m almost ready to either trade it in, or bury it under a pile of games I’m still playing (like Grand Theft Auto IV). As I suggested early on, Star Wars fans may still be able to get more from the game, but that appeal is certainly shortlived and extremely limited among all the failing points.