Fall reading list: Stephen King’s ‘It’ on the Kindle Paperwhite 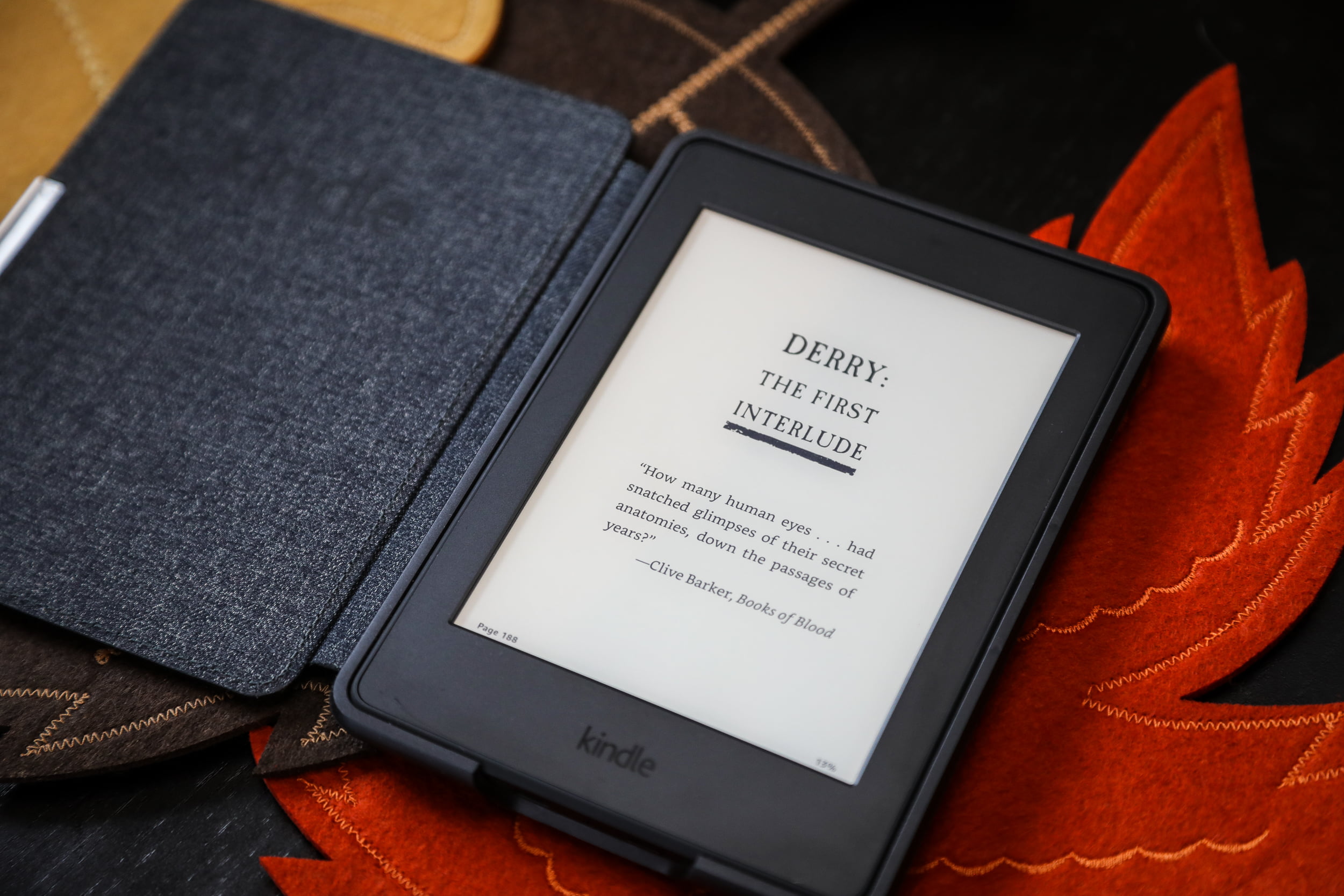 Stephen King is a master of psychological horror, and It is his greatest work to date. The novel was recently adapted for the big screen, but if you want to get to the powerful core of the story, you need to read the novel.

King’s It is available on Kindle, and since I had never read the novel, I decided this year I was going to read it on the Kindle Paperwhite. For weeks the story followed me around: I read it on the subway, on breaks between work, and I read it before bed. Since the novel is close to 1500 pages, it’s an epic read, and it’s worth every minute. Since it took me so long to read, it wasn’t actually all that hard to feel like I was living the story with the characters, which made the story feel almost real.

If you saw the film and felt drawn into the world that King crafted back in 1986, it’s safe to say that the book will take you down that tunnel even further. It is frankly like no other book I have ever read, and I’m not even sure that it’s fair to call it a horror story. There is horror in the story, especially the deeper you get into discovering the darker tale of Pennywise, and his reign of terror, but at the core of the story, it’s really about the Losers’ Club.

The story begins in 1958 as a group of seven kids–Bill, Ben, Bev, Richie, Eddie, Mike, and Stan–find themselves pushed together because of a group of bullies in their home town of Derry, Maine. As the group starts talking, however, they also realize that they have something else in common: they have all seen a horrifying creature that looks like a clown, which they call It.

At the same time, the kids realize they are living in one of the most terrifying towns in America, where children are constantly disappearing, and horrible things keep happening again and again, as if the town were cursed.

Weaving together the stories of the children, it didn’t take me long before I felt like I knew the seven kids. Their story is sad, and palpable, and reaches across the pages to make you truly love and care about them. All seven children have troubles at home, in one form or another, and I was constantly drawn into their story as they faced off against bullies and terrors.

What’s also amazing about It is that the story crosses two time periods, moving back and forth between 1958, when It first comes to the Losers, and 1985 when the Losers have grown up and must return to Derry to finish their story. King’s ability to tell two different stories, while also weaving those time periods together in fascinating ways, is deeply impressive, and that only adds to the depth of the story, and the roots of these children, as forces for good, in the evil town of Derry.

The book is gleeful, sad, frightening, heart-rending, and gruesome, and it’s one of the most thought-provoking horror novels that I’ve ever read. King’s It is an incredible read as well because it doesn’t feel like it has aged–the story feels vital, and modern to this day. That is a remarkable accomplishment for any writer, and it also speaks to why the film barely changed any of the original plot or story: it really didn’t need to. King’s writing is timeless, even when the time periods he’s writing about are decades past. That is not just the power of his stories, but also the power of his characters, who transcend time and place.

On another level, there’s something else unmistakable about It, and that’s the connection to another Stephen King story: Stand By Me. While I’ve never read the short-story that film was based on, the movie has a lot in common with It, from the group of friends and their relationships, to their fear of the brutal bullies hunting them. These similarities don’t diminish the story, they actually add to the book because it makes the characters feel even more universal.

King’s It was the first book that I ever read on the Kindle Paperwhite, and the experience convinced me that I would happily read anything on the Paperwhite. The Kindle Paperwhite 3G weighs just 217 grams, has a battery that can last for weeks, features a built-in light for reading day or night, and can hold thousands of books on 4 GB of memory.

In addition, the Paperwhite 3G can download titles over Wi-Fi, or over an included, free, 3G network connection that requires no contract or extra fees. That 3G network means that even if you’re travelling, you can buy a book and it will download to Paperwhite, as long as there’s an available 3G network.

Using the device outdoors, the Paperwhite is also impressive because it features a glare-free screen, so even at the beach, on a sunny day, you can keep reading without squinting at the screen.

Since I got my first Kindle Paperwhite, I’ve read more than a dozen books, and while I still do love reading some books on paperback, the Paperwhite is freeing because it’s so easy to take more than one book with you, and it fits just about anywhere. There are also phenomenal covers for the device, which add some style, and protect the device from bumps and scratches.

Fall Reads on the Kindle

Stephen King is one of my go-to suggestions for fall reading because he is not only a genius storyteller, but he writes stories that I think fit well for reading during this season. Most of us don’t get enough time to read in the summer, but I find I can make a little more time in the fall, and winter, to read a great book.

It would have to be my top pick for anyone who wants a great horror story, but The Stand is another classic, especially since King re-wrote it in 1990 to add more than 400 pages that actually improve the already incredible, apocalyptic story.

For lighter fall reading, The Martian by Andy Weir is a great read for science, and science fiction, fans. Fantasy fans should check out The Magicians by Lev Grossman, or for something more epic, there’s of course George R. R. Martin’s A Game of Thrones. Those two books not only complement the television series’, but add far more depth than what you will ever see on screen.

Baseball fans, or anyone who wants to read an engrossing story about the world of baseball, should check out Moneyball: The Art of Winning an Unfair Game by Michael Lewis, a surprising novel that reads like a documentary, but is absolutely fascinating, even for someone like me who doesn’t watch baseball.

Considering the breadth of novels available as ebooks in the Kindle Store, there are a lot of options though if any of my suggestions don’t quite suit you. Since I’m an avid reader, I can suggest about 100 great books, depending on what you like to read, so feel free to ask for suggestions in the comments below.

And perhaps in a couple of weeks, I’ll have to revisit my reading list again and suggest some holiday-themed reads.