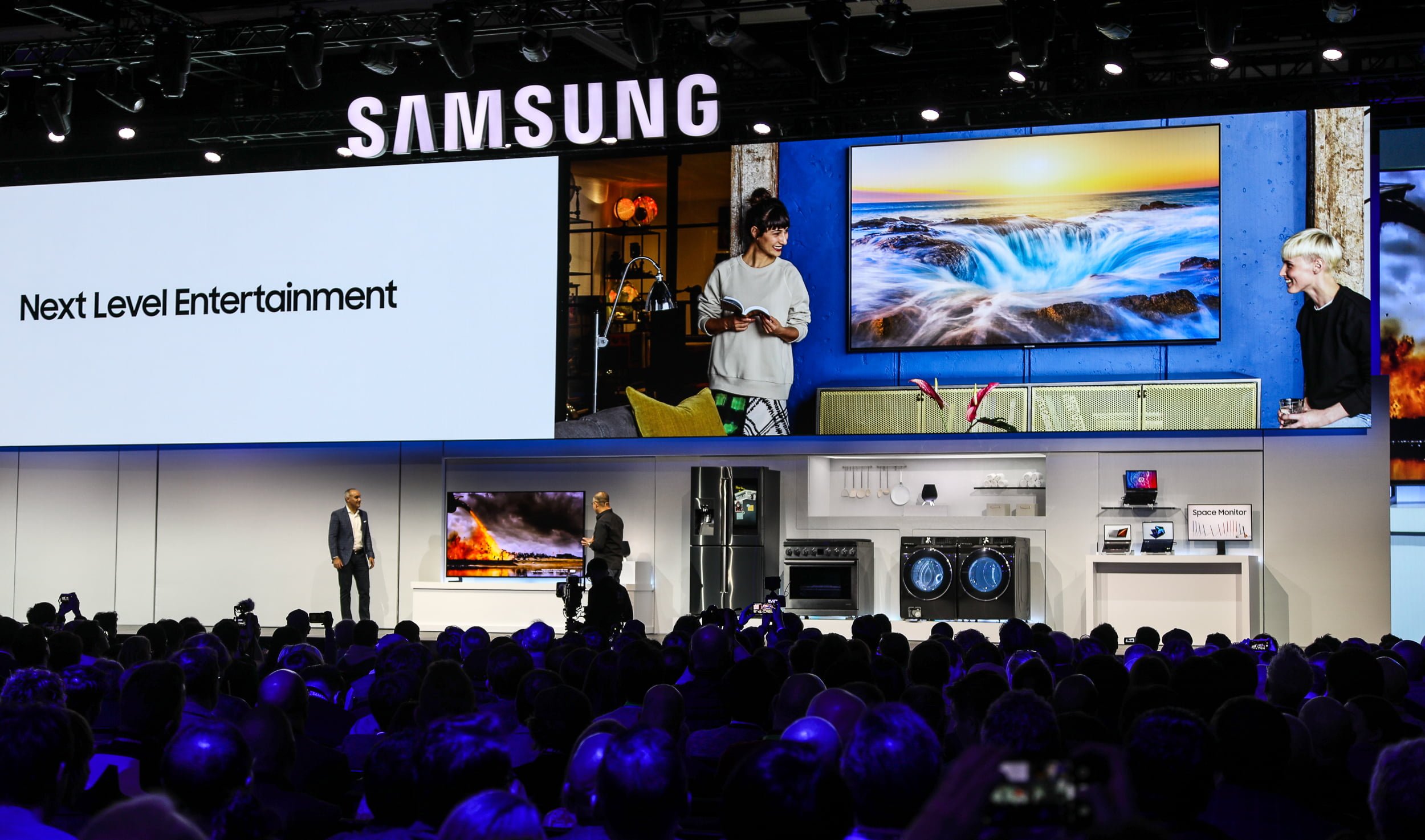 Samsung really wowed me at CES this year. Their gigantic booth, which they dubbed Samsung City, looked like a city square between modern urban towers, and it was packed with drool worthy technology and a number of surprises.

Among all of the new and updated technology that they showed off at the event, there were a few things that really stood out. At the top of my list, the new 98″ QLED 8K television is jaw-dropping, Serif TV and The Frame both received some welcome updates for 2019, the exceedingly clever Space Monitor is going to make a lot of must-have lists, and the updated version of the Wall is astonishing.

Here’s my rundown of some of my favorite things from Samsung’s CES announcements, and other highlights that they showed off in Samsung City.

Among the new televisions that Samsung announced, the massive 98″ QLED 8K television is the show-stopper in every way. The smart television is nearly the same size as some of the laser projector TV that I saw from other brands at CES, and about twice as stunning.

Beyond the 98″ version, Samsung also announced 65″, 75″, 82″, and 85″ QLED televisions for 2019, and the 8K models use Samsung’s new Quantum Processor chip that leverages AI technology to upscale content so it looks its best. Over time, the AI technology will also improve, so your content will actually look better 6 months or a year down the road.

Samsung also announced that their 2019 smart TVs will work iTunes Movies and TV shows, Apple Airplay 2, and both Amazon Echo and Google Home starting this spring.

And if you want to call it a television, Samsung’s Wall, which they unveiled last year at CES, has been updated with brilliant new MicroLED technology that’s brighter, sharper, and can be installed up to 219″ in a wide range of shapes and sizes, from 32:9 or 1×1 to the standard 16:9 ratio.

Out of everything I saw at CES, there were very few devices that were as impressive as The Wall, considering the size, brightness, and the clarity, not to mention the sheer intensity of watching what the system can do with all types of content.

(Personally, I’d love to see what it’s like to hook up an Xbox One X to play Forza 7, Assassin’s Creed Odyssey, or Shadow of the Tomb Raider on The Wall.)

For your office, Samsung also unveiled their dramatic Space Monitor, and while it has a great display, the real innovation was how much space it can save on your desk.

Rather than sitting on a stand in the middle of your desk, the Space Monitor attaches to the desk using a pivoting arm so it can be angled and positioned just about any way you need it, without taking up lots of real estate.

The Space Monitor will come in two sizes, with a 27-inch design featuring QHD resolution, and a stunning 32-inch version with 4K UHD.

Lastly, for televisions, Samsung also revealed updates to The Frame and the gorgeous Serif TV, their design-centric TVs, and I have to admit that these two televisions are my favorites.

Both TVs now feature QLED displays, for better constrast and colours, with new art arriving in The Frame’s Art Store, and the arrival of Bixby and voice commands for The Frame.

The Serif TV will also now feature Ambient Mode, which brings news headlines, weather updates, and images to the TV when it’s not showing other content. Serif will also now be available at electronics stores starting in 2019.

Two other highlights from CES included the new Samsung Notebook 9 Pro and the Samsung Notebook Flash. While there are no details yet about when they may launch in Canada, I can only hope that the answer is soon.

The Samsung Notebook 9 Pro is a gorgeous laptop with a metal exterior, a 14 hour battery life, impressive stereo speakers, and the Active Pen for taking control of your work, whether it’s to write or draw.

Using Bixby throughout Samsung City, Samsung also showed off how connected living is coming home. The latest Samsung appliances all include Bixby to help users pick the right wash cycle for their clothes, or to notify you when the wash is done.

Smart Things is also going to play an even larger role in Samsung’s range of devices, so you can connect to your fridge, ask your television to play your favorite movie, or connect to smart cameras to see from your television what’s going on in or outside your home.

One of the big surprises at CES was the fact that Samsung is working on a range of robots for their Connected Living concept, and while these robots could still be a couple of years away, the prototypes that they showed off were impressive.

The lineup of robots includes four categories of systems, including Bot Care robots focused on daily health routines, and Bot Air for finding and cleaning dirty air. The Bot Retail robot is a retail assistant for shoppers at stores or restaurants that could deliver items or take payments, and their GEMS system is a wearable prototype that people could use to improve mobility.

There are a lot of applications for what they have unveiled so far, and between Bot Care, and GEMS, there are some interesting applications. It’s not hard to imagine how the Bot Care robot could help the elderly with reminders for pills or to check their heart or other health concerns, and GEMS could be revolutionary for improving the mobility of workers doing repetitive or difficult work, or for anyone with reduced mobility.

And finally, there’s Samsung’s Digital Cockpit, a concept system developed with Harman that brings the latest technology to what could be the next generation of cars.

The Cockpit features a number of displays, safety features, and connected technology to bring the car into the future, including a Driver Monitoring System that could make sure sleepy or distracted drivers don’t get into accidents.

And maybe best of all, the system has been designed with customization in mind, so drivers and passengers could personalize their experience, from displays to navigation and even incorporating Samsung DeX for passenger productivity.

This really just scratches the surface of what Samsung debuted at CES, but it’s exciting to see what could be coming soon, and what’s definitely coming out later this year.

Plus, Samsung’s Galaxy Unpacked is just around the corner on February 20th at 11am PST.