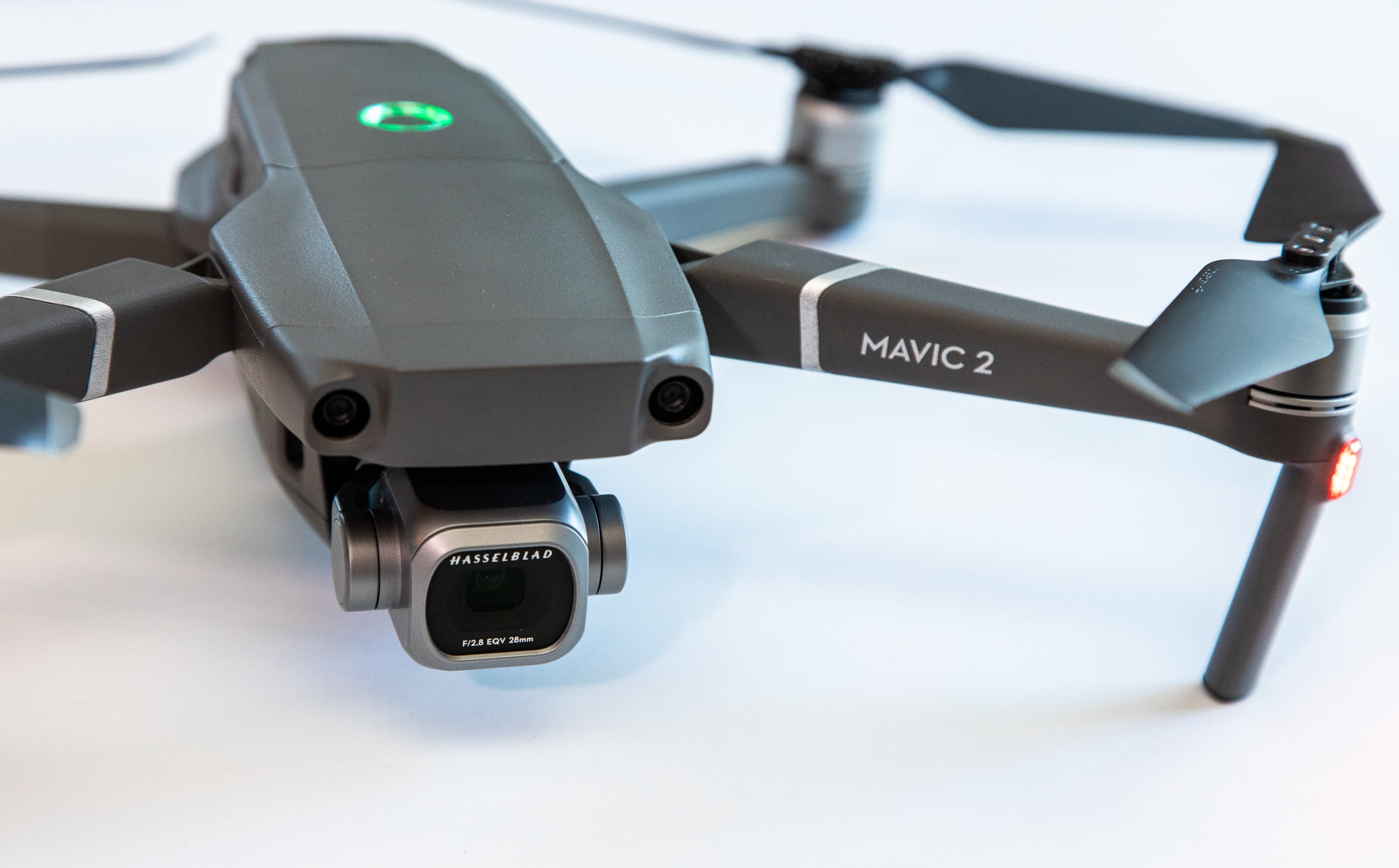 The DJI Mavic 2 Pro is simply the best drone available today for consumers who want to take great aerial videos. The drone is a big upgrade over the original Mavic, boasts an impressive Hasselblad camera, and it’s fun, robust, and intuitive.

The drone also feels like a serious piece of hardware, more than almost any drone I’ve handled before.

There’s a lot to talk about with the Mavic 2 Pro, so before I get to the L1D-20c Hasselblad camera, which is a big highlight for me, let’s go over the drone’s design and other features.

The Mavic 2 Pro has a similar overall design to the old Mavic, but the arms feel sturdier, and it’s a slightly heavier drone than its predecessor. In terms of weight, the Mavic weighs 734 g while the new Mavic 2 Pro weighs 907 g.

Like the rest of DJI’s main consumer drones, the Mavic 2 Pro folds down, making it small enough that it will fit in your average camera bag. The drone also features a new style of protective cover for the Hasselblad camera that fully immobilizes the gimbal while you travel, so it’s not moving at all when you travel.

The drone’s foldable controller is nearly identical to the Mavic’s, with a small screen for basic flight details, and the joysticks are removable so it folds down too and stores easily.

If you’re looking for a little more from the Mavic 2 controller, DJI also recently unveiled their new DJI Smart Controller exclusively for the Mavic 2, with a 5.5-inch ultra-bright display. It’s a seriously robust controller for USD $649, with a battery life up to 2.5 hours, and you can share photos and videos from the controller to your phone or livestream directly to Facebook or Instagram. The size and style are excellent for serious drone enthusiasts, but I haven’t tried it out with the drone at this point.

In the air, the Mavic 2 Pro has a number of key upgrades from the Mavic.

First, the drone’s battery lasts up to 31 minutes, which is a solid amount of flying time. That will vary depending on wind, temperature, and altitude, but the flying time should be close to 30 minutes, giving lots of time for flying and aerial photography.

With the Mavic 2 Pro, DJI also introduced ActiveTrack 2.0, their system for tracking subjects. The updates allow the drone to more seamlessly track the subject, thanks to a 3D mapping system and an algorithm for trajectory prediction.

All that means is that ActiveTrack 2.0 can now follow a subject better, even when there’s a brief obstruction. For instance, flying through a forest, the Mavic 2 Pro tracks a subject much better, and can avoid branches.

Obstacle avoidance has also been improved with omni-directional sensing that includes not just the front and rear of the drone, but the sides, upwards, and downwards. That feature is only available with ActiveTrack and Tripod Mode, but it’s a big deal if you’re flying in the woods.

The drone is also fast, tracking and following a subject up to 45 miles per hour, or just over 72 kilometres per hour.

Thanks to new propellers and upgraded systems, the drone is also somewhat quieter than DJI’s other drones. When there isn’t much wind, the Mavic 2 Pro can be very quiet. Landing the drone without any wind, it was the quietest drone I’ve ever flown, but on a second flight, when the wind picked up to about 20 kph, the noise levels were only slightly reduced, so it does depend on the wind a lot.

The real power of the camera is the sensor. Hasselblad’s 20 MP 1″ CMOS sensor is around twice as large as the Mavic Pro’s original camera sensor, which gives it better low-light performance, and vivid photos and videos.

If you’re not aware, 4k video is pretty common these days, but the 100 Mbps makes a big difference in the quality and it shows in all the footage I shot. While I love my Mavic Air still, and the fact that it’s so compact, it just can’t compete with the quality of the Hasselblad camera.

My only complaint with the drone’s photo and video quality would be that the auto settings are not very good. In my tests, when I set the drone to automatically balance photo and video settings, the results were very dark. The scenes were very white, because of snow, but I expected a bit more from the drone considering how well phones and cameras work today to intelligently take pictures.

On manual settings, the camera performed exceptionally well, but it would be nice to rely on the automatic option depending on what you’re shooting.

Out of everything I tested with the Mavic 2 Pro, my only other complaint would be that the controller didn’t get an upgrade, but for the price, the controller is a good deal all the same, and it works well.

If you’re looking for a new drone, and you want the best possible camera quality for an affordable price, the DJI Mavic 2 Pro is hard to top. It’s everything I wanted in a drone, and a little bit extra thanks to upgrades and new features. Happy flying!