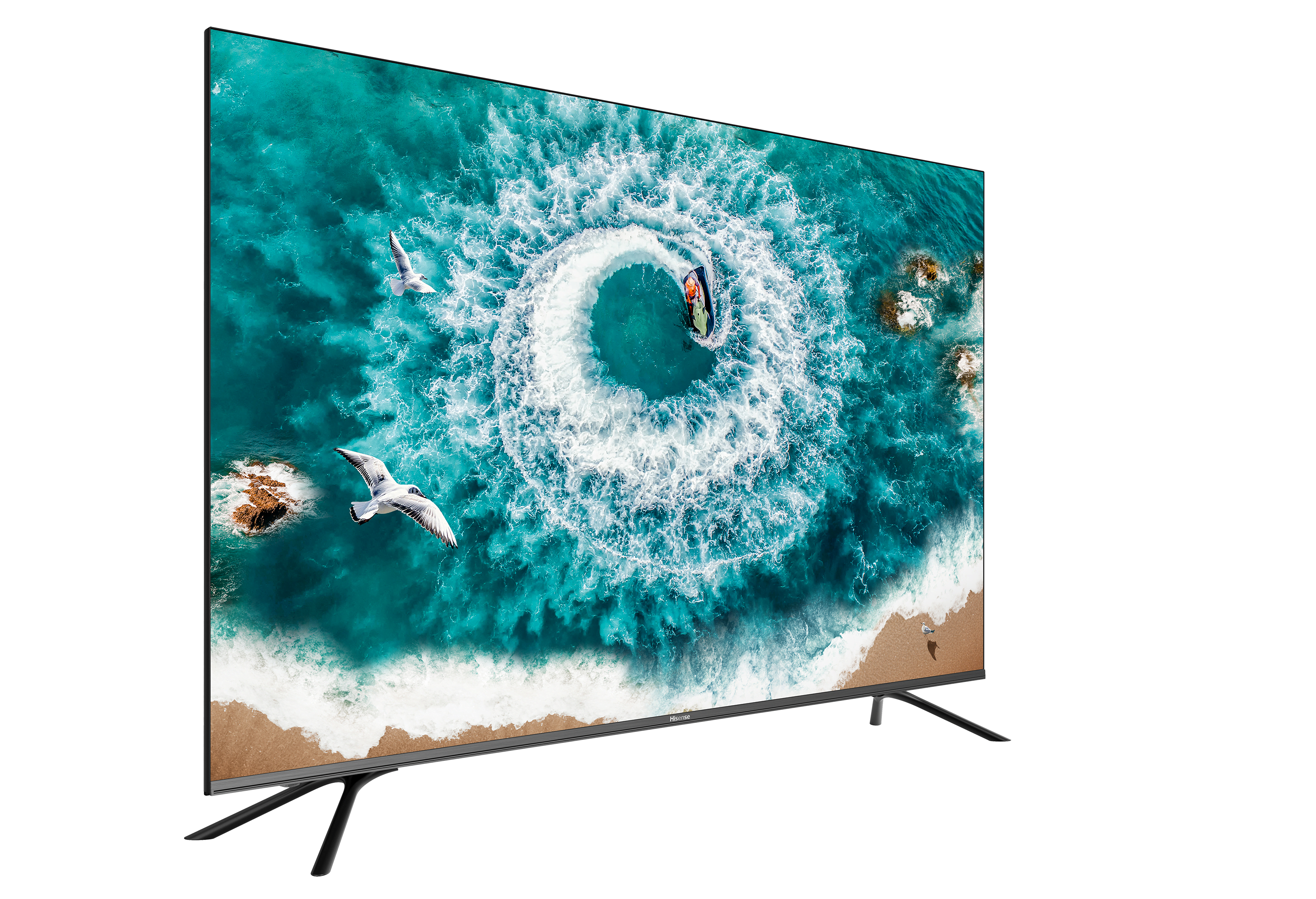 The new Hisense H8 4K ULED TV arrived in Canada this month, and I’ve been testing it for the last few weeks as my family’s main television for cable, streaming, gaming, and watching content from our phones and other devices.

From the start, the H8 has been consistently impressive, and it leads its class as a well-priced, full-featured, 4K TV.

Priced at just $899 for the 55-inch model, the Android TV is a great buy, thanks to excellent features and picture quality, and the only televisions that beat the H8 come in at nearly twice that price, or more.

The overall aestetic of the H8 is clean and sleek, and it comes in a 55-inch model or a 65-inch model in Canada.

On the front of the TV, under the far-left corner, beneath the bezel, there’s a small RF sensor, and the company’s name is discreetly centred on the middle of the bottom bezel. Otherwise, the bezel is quite slim, and the only other visible elements are the two black legs that are clean and match the bezel colour so they are not distracting.

On the back of the TV, the H8 has the power cable coming out the right side, from the viewer’s perspective, and the inputs all come out the left side. Whether you mount the TV on a wall, or stand it up on a cabinet, the inputs are easy to access, although one HDMI input sticks out from the back if you’re mounting it on a wall.

Maybe most importantly, unlike some other cheaper TVs, the H8 has a good range of inputs and outputs, which includes four HDMI ports, two USB ports, RCA outputs, optical audio output, a headphone jack, and one coaxial connector. Since it’s a smart TV, the H8 also offers Wi-Fi and Bluetooth connectivity.

The television features a very respectable 700 nits of peak brightness, making it brighter than a lot of similarly priced TVs, and it works with the new HDR10 standard as well as Dolby Vision, wide color gamut (>90% DCI-P3), and full array local dimming for better contrast and colours.

In terms of the brains behind the H8, it uses the Hisense Hi-View video processing engine, which optimizes picture and sound quality, whether you’re watching a movie, TV, or gaming.

The remote control is also well designed, with all the standard smart TV buttons, including playback controls for video on Netflix or YouTube, plus a dedicated button for launching the Google Assistant search, as well as four content services.

Setting up the Hisense H8 was relatively simple, and not all that different from setting up any Android phone. There are a few quick questions, you connect it to Wi-Fi, and it will run updates after some introductions to the features.

The Android TV home screen is clean, and fairly customizable, but it’s not perfect. In an ideal world I wish it was somewhat akin to an Android phone’s UI, where you could drag and drop things, or take things away entirely.

Instead, you can drag lines of featured content up or down the rows on the home screen, or hide some elements entirely, but the customizations of the home screen are limited. That’s primarily an Android TV complaint, rather than an issue with Hisense, but it’s notable.

Compared to other smart TVs, the interface is simple to navigate and easy to use, and with Android TV you can add other apps, like Spotify, or Plex (for streaming your own collections of music, movies, or TV shows). Naturally, Netflix, YouTube, and Google Play are installed by default, and those are primarily where my family watches most of our content, outside of cable.

Apps and the overall system run quick and smoothly, although some apps may take 1-2 seconds to load, but that’s not uncommon among even more expensive televisions.

You can also label your inputs, so it’s easier to find your Xbox One X, from your other gaming systems or your Blu-ray player, and you can easily jump from input to the home screen or right from input to input.

If you are new to Android TV or smart TVs, the best part of owning a TV like the H8 is jumping into the Google Play store and realizing you can watch or digitally own movies before they’re out on Blu-ray.

As well, the H8 works with your Amazon Alexa devices, so you can turn the volume up or down, or off and on, with an Amazon Echo, or the Alexa app on your phone.

Finally, there’s the impressive 4K and HDR performance, and the sound quality.

Both the 4K and HDR on the Hisense H8 are consistently very impressive, especially from sources like Google Play or Xbox One X.

Colours are vivid and sharp, and watching Spider-Man: Into the Spider-verse was awe-inspiring, and really showed off both what the TV could do, and the stunning work of the filmmakers.

It’s further proof as well that a great TV and streaming services are often better than the quality we’re seeing from your standard cable service.

4K Blu-ray movies played through the Xbox One X looked crisp, sharp, and vivid, and gaming really blew me away, especially thanks to the HDR performance. Playing Xbox One X Enhanced titles is jaw-dropping, particularly for games like Assassin’s Creed Odyssey, Far Cry New Dawn, Forza Horizon 4, or the stunning Middle-earth: Shadow of War. Frankly though, even Minecraft looks amazing.

For the sound, you can customize the settings to improve the TVs performance for your space, or to your liking, and it will do well for most rooms, but the quality could be a bit richer. Ideally, I would recommend pairing the TV with a sound bar. The TV also has a big difference between volume level 6 and 7, as an example, so it can be a little hard to get the right volume on some shows if you don’t want it too loud or too soft.

Considering all the features, the power of Android TV as a user interface, and the overall picture quality, the H8 is an excellent TV for a great price. If you want an affordable television, the H8 checks off all the right boxes.