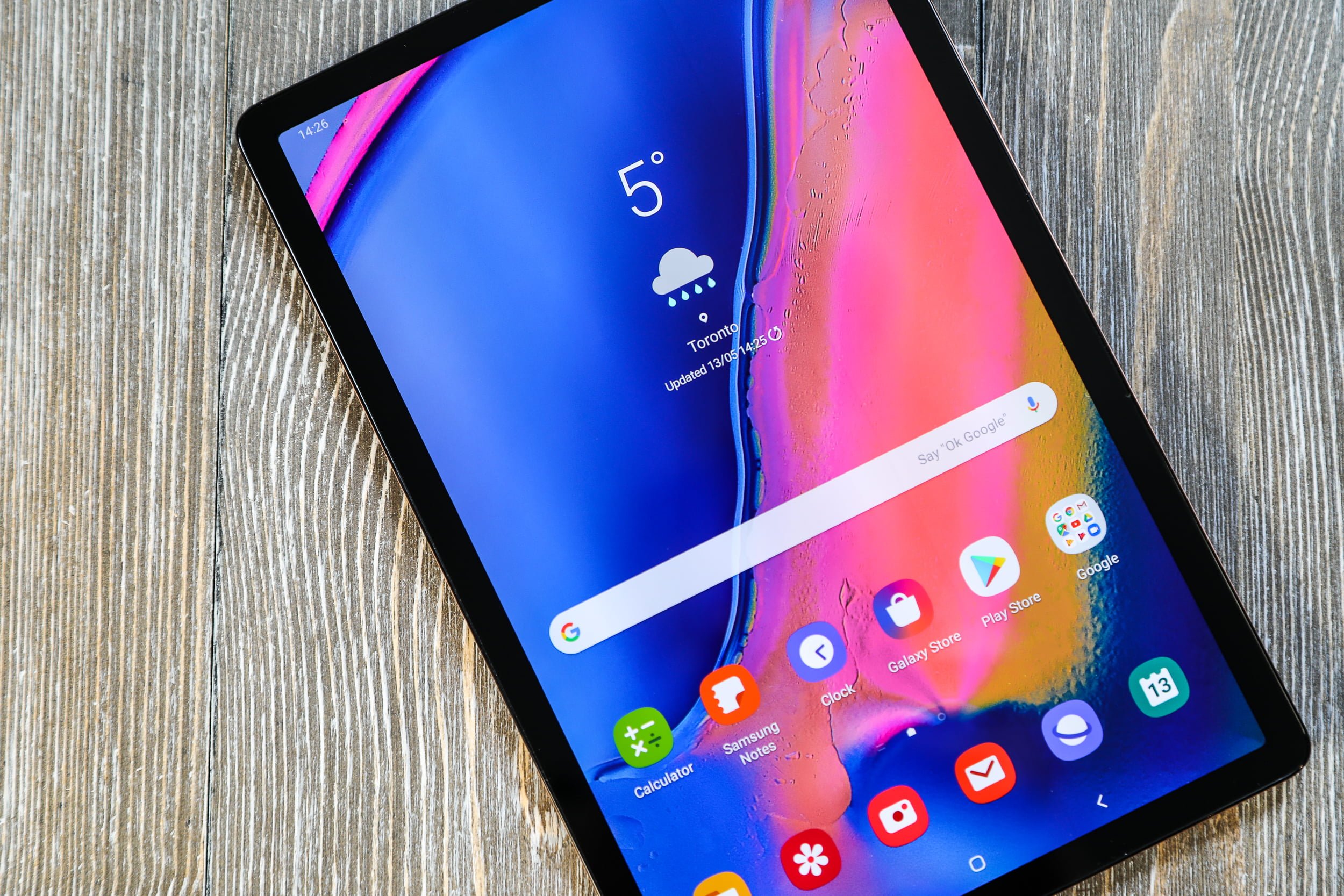 The Samsung Galaxy Tab S5e is, without question, the best Android tablet out there today, and it’s one of the best entertainment-focused tablets available today too, with numerous features that beat the competition.

Launched in the spring, the new 10.5″ tablet with a wow-inducing WQXGA Super AMOLED display does pretty much everything just right, and the battery lasts for a long, long time too.

Jumping ahead of everything else, if you’re looking for a summer entertainment tablet for movies, music, or gaming, the Galaxy Tab S5e is a great choice, especially if you’re an Android user already.

Overall, the Galaxy Tab S5e design is straightforward, but it has a few key elements that are really exceptional.

For starters, the tablet has four speakers–one for each corner of the tablet, effectively–and no matter how you rotate the Tab S5e, the speakers adjust to deliver the best possible sound.

I also appreciate that the power button, which sits on the upper-right side of the tablet when it’s facing vertically, doubles as a fingerprint reader for easy, secure logins. And then above that is the standard volume rocker.

Otherwise the tablet has a USB-C port along the bottom edge. Samsung made the choice to forgo the headphone jack on the tablet, and I can’t say that I blame them considering the abundance of great wireless earbuds (like the Galaxy Buds), headphones, and the fact that the tablet comes with a USB-C adapter to plug in your older wired earbuds anyway.

Most notably, the tablet is a very slim at just 5.5mm thick, 245mm tall, 160mm wide, and it weighs just 406g, making it very portable and light. The S5e is available in silver, black, and my favourite, the eye-popping gold, which looks phenomenal.

The tablet also has nicely slim bezels with a screen-to-body ratio of 81.8%, which is quite good.

For the brains of the tablet, the S5e features a powerful 64bit Octa-core processor that flies. Everything loads quickly, and gaming, including heftier apps, work very smoothly.

For the RAM and internal memory, you have two options, so you can get the Tab S5e with 4GB and 64GB of memory, or for a little more there is also a model with 6GB of RAM and 128GB of memory. Either way, the tablet can also use a microSD card to add an additional 512GB of memory.

Before we get to the display, let’s talk about those 4 speakers, and the exceptional sound from the S5e, thanks to AKG and Dolby Atmos.

Whether it was Spotify, Netflix, or even just YouTube, the tablet makes everything sound exceptionally great, and the way it adjusts to optimize the sound for vertical or horizontal display is frankly a big deal. I’ve had numerous devices that only sound good in one orientation, but this tablet just sounds great however you use it. Watching 4K shows on Netflix made it hard to go back to any other tablet.

And like all of Samsung’s premium devices, the display on the tablet is incredible, making colours pop, with content that’s crisp and sharp from any angle.

The battery on the tablet is hard to top at 7,040mAh and features Samsung Fast Charging, so you can get up to about 14.5 hours of streaming and browsing, and it only takes about 30 minutes to charge up to about 30%, or around 3 hours to get a full charge.

The cameras on the S5e are also impressive, and this may be the first tablet I’ve used in a long time that I feel like I can actually praise the quality.

On the front, the camera is a pretty impressive 8MP for selfies and video calling, and the rear camera is 13MP, shooting up to UHD 4K at 30fps; both of which beat competitors at the same price point.

At the top of my features list, there’s DeX, the Windows-like display option that can be enabled on most new Samsung devices so you can get into work mode.

Depending on what you’re looking for, the Samsung Tab S5e can double as a reasonable work tablet too, offering a number of apps in full-screen mode so you can work on spreadsheets, Word documents, or presentations, not to mention email, and general web browsing.

To make the tablet even more useful in DeX mode, you can also buy a keyboard, charging dock, or cover, effectively turning the S5e into an ultra-portable light laptop.

And if all of that wasn’t enough, I love that you can also answer calls coming into your Samsung Galaxy smartphone, so if you’re on the tablet and a call comes in, you don’t have to hunt for your phone.

The Samsung Tab S5e is a fantastic overall entertainment device with power, versatility for a range of users and families, and it’s easily one of my favourite tablets that I’ve ever used. The form factor, size, and weight are excellent, and it sounds fantastic, and looks amazing.

The Tab S53 starts at $549.99 for 4GB of RAM and 64GB of memory, and you also get 4 months of YouTube Premium for free if you’re looking to try out the ad-free service.