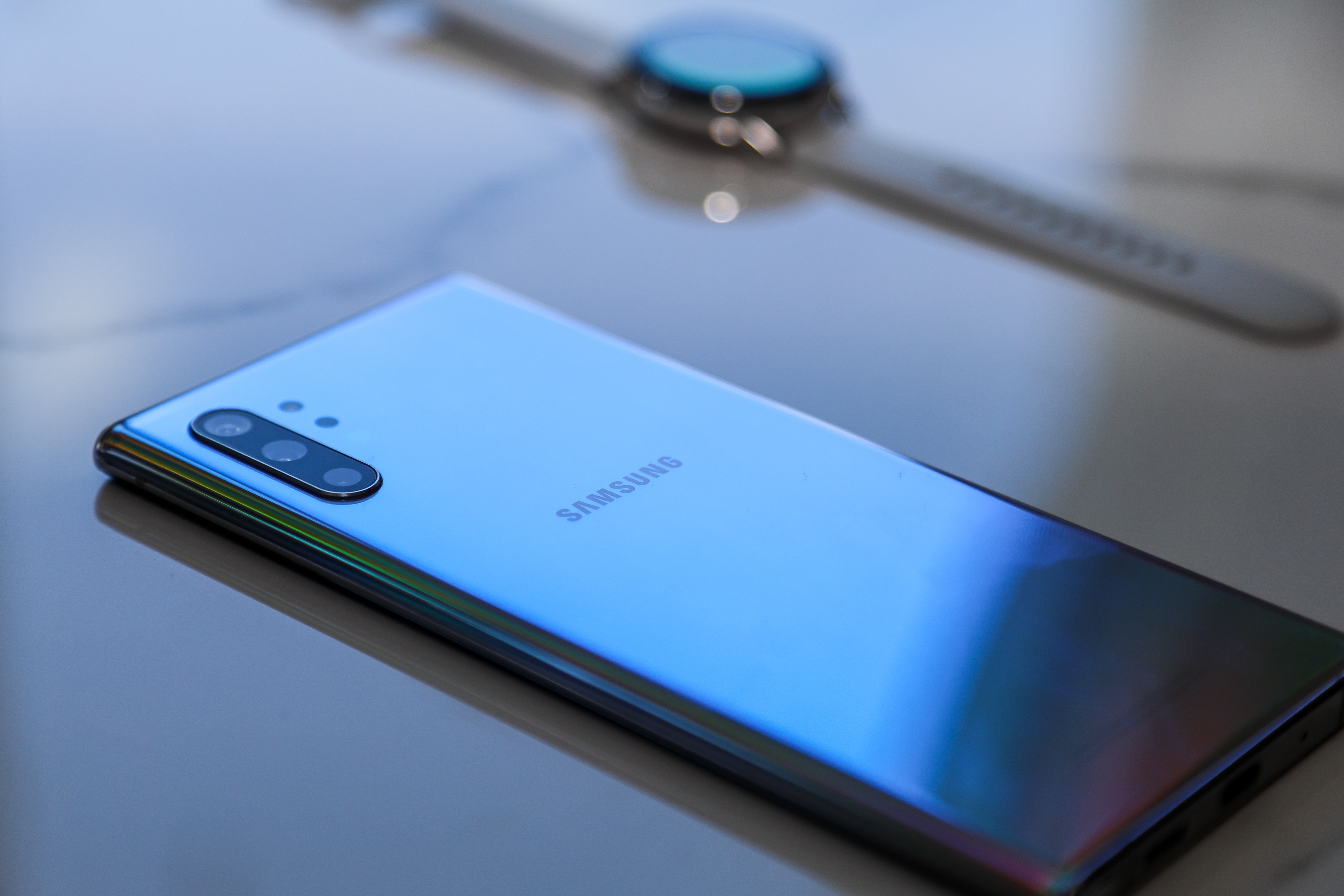 The Samsung Galaxy Note line of devices has always been what I consider one of the best for getting things done. From the size, to the speed, and then the S Pen, the smartphones have stood out for me, and the Galaxy Note 10+ is no exception.

This year we’ve seen a lot of new Android phones, and many of them are strong on different levels. The Samsung Galaxy Note 10+ is one of the few that leads on multiple fronts, from the camera and video quality, to overall speed, user experience, a quality build, and the gorgeous new colour: Aurora Glow.

I have a few minor complaints with the phone, but I still consider the Note 10+ to be the best of the best if you’re looking for a phone that can do a lot, and efficiently.

Colours include the Aura Glow, Aura White, and Aura Black, but the Glow is really the star of the show if you ask me.

Some other Galaxy devices have felt a bit slippery in the hand, and while a case is still a must for the phone, I found the Note 10+ easier to hold than the Galaxy S10+.

One major change with this device is that there’s no headphone jack on the Note 10+, but the phone comes with USB-C earbuds, and there are adapters if you really want to keep your old headphones. Or, the Galaxy Buds are incredible if you’re ready to jump over to a great pair of wireless earbuds.

The phone otherwise features a 7nm 64-bit Octa-core processor with a very impressive 12GB of RAM, which is exactly why the Note 10+ works so beautifully.

Lastly, the phone has a 4,300mAh battery, which last about 12 hours of non-stop, general use, or around a day and a half for me on one charge doing a range of tasks from taking photos to watching videos, posting on social, and light gaming.

Overall, it’s gorgeous, dreamy, spectacular, and eye-catching. There are simply no other phones like it right now. The Note 10+ is definitely pricey, but for professionals, it’s worth it.

There is stiff competition for quality cameras, and while I respect a few different devices for various reasons, the Galaxy Note 10+ won me over in much the same way as the S10+ because of the vibrant, true-to-life colours, HDR, and the range of camera features.

Like all of the devices offering ultra-wide photos and video, there is some distortion around the edges in these modes, but the results can be gorgeous in the right conditions. Where the Note 10+ really shines is at normal zoom (1.0) or up to 2.0 zoom and in Live Focus mode for bokeh or other background effects.

Other devices have better long-range zoom capabilities, and that’s worth noting if that’s a factor for you, but under normal conditions I like the quality of the images from the Note 10+ better than most competitors, mainly because of colour quality, sharpness, and brightness. You can see some of the photos I’ve taken recently at the bottom of the story, and all of them are direct from the phone with no editing to show what the phone is capable of capturing.

Video is tremendous, and outshines all the competitors because of the HDR shooting quality, stabilization, low light performance, and the fact that Adobe Premiere Rush runs beautifully on the phone for editing. Some features require an Adobe subscription, but they’re worth it if you shoot and share a lot of video and you want to do it directly from your phone. Samsung has also included their own basic app for video editing.

Compared to the S10+, the Note10+ has nearly identical cameras, except that the Note features better apertures for the telephoto lens.

On the front side of the device, the single camera is punched out of the screen, which makes it nearly invisible most of the time, while still offering good selfie photos and videos.

And for fans of creative shots and video, you’ll want to play around with some of the new Live Focus effects, which can also be applied to video. Glitch is by far the coolest, but it obviously doesn’t suite every moment, and I hope they add a few more over time.

There is a lot to say about the S Pen for the Note 10+. It’s a powerful tool that opens up a lot of options on the Note. On the simplest side of things, it’s a great tool for screen captures, hand-written notes, doodling, and capturing photos or video without touching the phone. It also works well for a number of games.

With the Note 10+ though, you can also use air gestures with the pen to turn the volume up or down, skip tracks, or zoom in or out when you’re taking photos or video. You can also capture notes on your screen while the screen is off with the Screen Off Memo feature.

At its best though, the S Pen is essential for people like me who want to have an easy, precise tool that you can use, and jot down a few notes now and then. I don’t use the S Pen every day on the Note, but it is my go-to for getting more out of the device.

Samsung now offers two ways to connect your phone to your PC, including Samsung DeX, and the new Your Phone Companion app from Microsoft.

DeX works the same as it has in the past, except that you can now also launch the feature just by connecting your Note 10+ to a PC with a USB cable. Alternatively, you can plug the phone directly into a monitor to act as an Android computer, effectively.

Microsoft’s Your Phone app on the other hand gives you access to your phone from the PC, and all you have to do is sign in to the same Windows account on both apps.

The main benefit of Your Phone is that you can see photos, read and reply to text messages, get notifications, and even use your phone apps from your PC screen. Access to messages and photos is really the big benefit, but more features are should be rolled out over time too, according to Microsoft.

The Samsung Galaxy Note 10+ is a winning device most importantly because it’s so powerful. The device flies through any tasks, multi-tasking, gaming, videos, video editing, photos, and it looks gorgeous thanks to one of the best displays on any device today.

Because of the range of features, the S Pen, the display, and the processor too, the Note 10+ could last a little longer for battery life, but it stands up very well for the entire day, unless you’re really using it a lot.

I would love to see bigger advancements with the cameras, video, and camera apps, but the Note 10+ still stands out as one of the best camera phones overall, and to be fair, each of the smartphones today really excels at different things anyway. The Note 10+ excels at photo colour, depth, contrast, and especially video stability and brightness.

If you’re a creator, someone who games and works a lot, or someone who needs versatility from their phone, the Note 10+ is the device for you, especially if you’re already an Android user.

Paired with the Galaxy Buds, or Galaxy Watch, the Samsung Galaxy Note 10+ is powerful, fun, and friendly to use, and the whole user experience is fast, elegant, and smart.