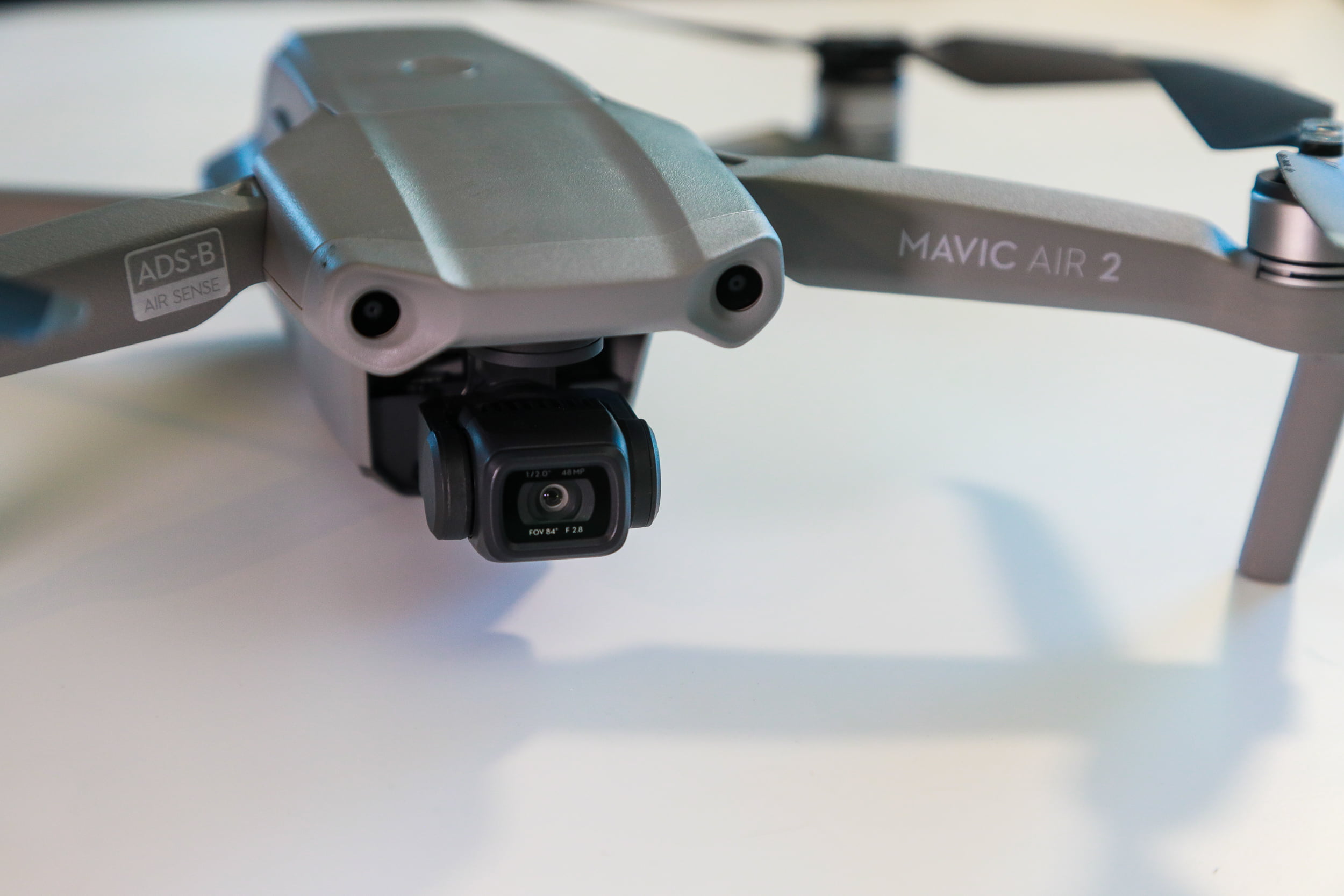 The DJI Mavic Air 2 surprised me from the first moment I picked it up. I’ve enjoyed flying the original Mavic Air, and it did a lot in a small package, but the Mavic Air 2 is seriously impressive, with some big upgrades that are obvious the moment you take it out of the box.

Compared to the original Air, the Mavic Air 2 is more solidly built, handles better in the air, has a much-improved remote control, and a number of upgraded specs on top of all that.

The Mavic 2 Pro, and DJI’s other recent drones have a number of excellent features, but the Mavic Air 2 hits a serious sweet spot for drone pros and enthusiasts because of the excellent price, and maybe most impressively, the quality of HDR video. If you ask me, it’s a must-own drone if you’re looking to upgrade or even start out.

Compared to the original Mavic Air, released in 2018, the drones hardly even look like they’re related, and that’s a great thing.

I love the sporty design of the Air, but the Air 2 has a much sturdier design, bigger and better designed propellers, and longer arms that seem to improve stability.

The battery compartment has been moved to the top of the drone, the camera is larger, and yet it still folds away small enough to fit in most camera bags.

Most importantly, DJI has made major improvements to the controller design, making it more comfortable, with no antennae to adjust, and the holder for your phone now sits at the top, making it more natural to use and watch what you’re shooting.

Whereas the Air had a slightly sporty but overall cheaper feel, the Mavic Air 2 feels refined. As much as I’d love some racing stripes or some funky colours to choose from, the focus with the new drone is on function and usability, and it’s a great change.

For the drone’s handling, I found it easier to fly than the Air, and more responsive. That’s very likely a result of the better controller for the new drone, and increased maximum flight distance, which is up to 18.5 km.

In some very high winds the drone got pushed around a bit, but the drone has a better capability to stay in one spot than the lighter Air.

At 570 grams, the Mavic Air 2 is 140 grams heavier than the original, and between that and the build quality, it feels sturdier. The drone also still gets far more flight time at 34 minutes, versus its predecessor’s 21 minutes, and that’s a big deal too.

The Mavic Air 2 is faster, can fly further away, can operate down to -10°C, the gimbal has a wider tilt mechanical range, features Advanced Pilot Assistance Systems (APAS) 3.0, OcuSync 2.0, and we haven’t even gotten to the image quality and video.

Some of the improvements are certainly smaller ones, and it makes sense that a new drone released today would have to be better, but the overall quantity of new and improved features is frankly very impressive.

And beyond all the other specs, the drone and the propellers are much quieter than previous DJI drones. I’ve been able to hear previous drones up to 100 meters above me in the past, but the Mavic Air 2 is very quiet. At points when it was just a few meters away, I could hear it, but just barely.

Noise levels will depend on your environment and the wind speeds around where you’re flying, but this is definitely a quieter drone.

Finally, the drone’s APAS 3.0 system works remarkably well to avoid obstacles, even when it’s in a preset flying mode, while the object tracking is the best I’ve seen on a drone.

The Mavic Air can achieve impressive results, and the quality is worth talking about, but the Mavic Air 2 blows it away with gorgeous 4k HDR video and photos, scene optimization, and video up to 240 fps too in HD quality.

Shooting photos, there are a lot of options, and many of them of similar, but the Air 2 includes the new SmartPhoto mode that can gets beautiful shots in a lot of challenging conditions.

In most modes, the drone shoots at 12 MP, including for Timed, SmartPhoto, and Automatic Exposure Bracketing. However, 48 MP mode gives you a raw image you can adjust, and it still comes out looking polished from the start.

I enjoyed testing all of the modes, but SmartPhoto’s scene recognition is hard to top. It pulls out more detail and depth, especially when the sky is bright, or dark scenes below.

For video, the drone really excels at offering options for whatever you’re trying to shoot. 4K Ultra HD can shoot up to 60 fps, or with HDR turned on, it captures up to 30 fps. Depending on what you’re shooting, they both create some incredible results.

And in FHD mode, you can shoot up to 240 fps to slow things down with stunning slow motion video.

Best of all, the video is at 120 Mbps, offering way more details, and it can store files as MP4 or MOV.

And for something really special, the new 8K Hyperlapse mode can create a gorgeous short video, with a series of 48 MP photos stitched together. There are a number of settings to work with here, including how long it shoots for, and the interval between images, but it can create some impressive results.

In HyperLapse mode, the drone can fly in four modes, including Free movement, Circle, CourseLock, or WayPoints, so you have a few options when creating this kind of video. The results can vary, depending on how and where you shoot, but in the right conditions the results can be worth the time.

On top of the drone, controller, and normal accessories, the Fly More Combo includes 3 batteries, a battery charging hub, three neutral density filters (ND16, 64, and 256), and a shoulder bag that I love and fits all the accessories.

If you’re going to do a lot of flying and want to get the most out of it, I’d suggest paying a bit more for the combo deal.

Even after flying the Mavic Air 2 for hours now, I feel like I’m still learning what it can do. It’s a powerful tool for any cinematographers, and it covers numerous uses.

I wish it shot in vertical video mode, but outside of that wish, it does everything I could have hoped.

On top of that, I found it easy to learn, and the new controller really makes a big difference, especially if you plan to fly for a while.

For serious drone enthusiasts and experts, the Mavic 2 Pro offers a few extras that top the overall quality of the Air 2, but the size, weight, price, and mix of features makes the Air 2 my favourite DJI drone to date.

Stay tuned for more videos with the drone on my YouTube channel.

This dude (firstquadcopter) tells that no image quality difference between 12 and 48MP modes. Do you know what size of sensor is truly has? If the higher resolution is obtained by software enhancement it is only a marketing tricks…

The issue in that article is just poor writing. He’s saying that at 3200 and 6400 ISO, the image quality looks the same (noise, etc). I’d have to agree with him. The sensor is otherwise 1/2 inch and there’s a lot of quality difference between 12 MP and 48 MP.