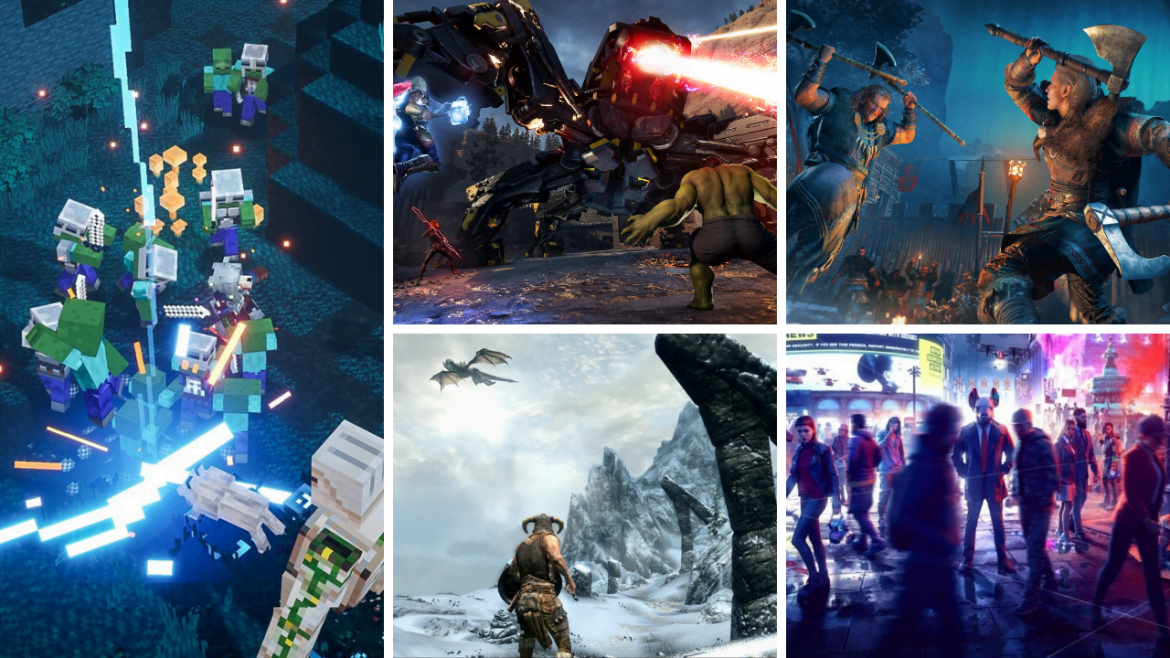 This year promises some great titles for Xbox, and we still have a few weeks (and in some cases, months), to wait for Halo Infinite, Fable, Outriders, and Rainbow Six Quarantine anyway, so I’ve put together my top five games you should be playing on Xbox now, if you haven’t already.

Most of these titles are also available on Xbox Cloud Gaming with Game Pass Ultimate, if you weren’t sure what to play next, here’s my list from the casual, to games that will take you days or weeks to finish.

Minecraft Dungeons & Flames of the Nether

Minecraft Dungeons is one of my favourite casual titles on Xbox, mainly because it’s so easy to jump in and play a level for a little while, whenever I have half-an-hour. Based on the original Xbox game, Dungeons is a top-down dungeon crawler that has a lot of levels, gear, character customizations, and ridiculously fun gameplay.

Since it launched last year, the game has also debuted four DLCs, with the latest, Flames of the Nether, adding six new maps. Xbox Games Pass also offers daily challenges, and it’s easy to play it on your phone. In fact, if you want to get into Cloud gaming, Minecraft Dungeons is the best place to start since it’s so easy to play, and you can use touch controls instead of a controller.

The game is light, fun, and it can be as tough as you want, with lots of options to replay levels for better gear. And while it’s great on your own, it’s great together. As a Minecraft fanatic, my seven-year-old daughter loves playing it with me.

Minecraft Dungeons is included with Xbox Game Pass Ultimate, or it starts at $19.99 for the Standard Edition.

If you’re a Marvel fan, it’s hard not to geek out about Marvel’s Avengers. The game is so much fun, it’s the perfect length, and you play as Ms. Marvel, Captain America, Iron Man, Black Widow, Thor, and Hulk. What more could you want?

Following a storyline that unlocks characters as you go, you start out as Kamala Khan, aka Ms. Marvel, as she grows into her super powers. She’s on a mission to help save the Avengers from AIM, who have taken over the United States after a disaster that may have been caused by Captain America.

Gameplay is easy to learn, and there’s gear to unlock and upgrade to make the heroes more powerful. There are also side quests as well as online multiplayer quests, so you can play on your own or with friends. And while some quests require certain characters, there are lots of options to play your favourites as much as you like. (I’m forever a Thor and Iron Man fan–they’re just too much fun flying around, knocking enemies around the battlefields.)

I’ve been playing Assassin’s Creed since the first one launched in 2007, and the latest is an addictive Viking quest that takes you into an epic tale of conquest, battles, and building.

Assassin’s Creed Valhalla is set to launch their first expansion in the Spring, Wrath of the Druids, but until then, the game is huge, and lets you pick what you want to focus on.

Starting off in Norway, before being driven to England, you can choose to plunder the world around you as Eivor, the Viking warrior, focus on the storyline, or build up your new home with a settlement worthy of legends.

The game is expansive, with battle sequences that are wild, and rough, and challenging. The game sucks you in from the moment it starts, the characters are rich and interesting, and even on the Xbox One X, the graphics are stunning. It’s really like stepping back in time, which is what makes the Assassin’s Creed franchise so incredible. And for those of you with a new Series X or S console, the game has also been enhanced for those systems.

The Elder Scrolls V: Skyrim first came out in 2011, and since then, it might actually be shocking to some people how much I’ve played the game. I finished every quest I could find back when I first got it, and then, when I found the remastered game again on Xbox Game Pass in 2020, I played it again. For hours and hours.

There are countless quests, side-quests, and DLC quests, for role-playing fans who want to be fighters, mages, thieves, or a mix of all three. Become a vampire, or a werewolf, join the army, make potions, throw fireballs around, and fight creatures of all shapes and sizes.

There are dragons, ghosts, weird and wonderful NPCs, and you can craft your own weapons or build a house. I wandered from one end of the map to the other, and loved every minute of it. And we haven’t even talked about the music yet. Or take a minute, and stare up at the night sky and take in some of the most gorgeous art.

Whether you’ve played Skyrim before, or you’re just discovering it for the first time, I promise the game will surprise you, as well as the depth of the stories, and attention to detail.

In the near-future, after brutal terrorist attacks, London has been taken over by Albion, a security company that’s up to no good. Controlling the country, and watching over them with drones and thousands of cameras, the only group that opposes them is the one that was blamed for the attacks.

Watch Dogs: Legion puts you in the boots of one of many DedSec hackers, each with their own skills, tools, and special abilities. You recruit new hackers from the street, and then play as them against Albion, and the crime syndicate known as Clan Kelley.

The gameplay is pretty fresh and unique, with numerous ways to complete missions using hacking, fighting, drone-flying, and even spiderbots. I completed quite a few missions just with the bots or drones, while others involved huge shootouts, and mayhem.

And, of course, you can get your favourite characters dressed to the nines in some wild hacker fashion statements, including masks and LED-enhanced clothing.

There are about a dozen other titles I’d recommend, whether you plan to purchase them, or play them on Xbox Game Pass. Narrowing it down to just a few that are available for console or Cloud gaming, I really recommend checking out Halo 5: Guardians, Gears 5, Forza Horizon 4, and one of my favourite franchises, Mass Effect: Andromeda.

For console-only titles, Mass Effect 2 and 3 are also on Game Pass, as well as Dragon Age: Origins, and Dragon Age: Inquisition. Not to mention Star Wars Jedi: Fallen Order, with some wildly fun lightsaber battles and Force powers.

And naturally, there’s also just straight-up Minecraft for you or your kids. I’ve been playing Minecraft on and off since I got the Xbox One X, and it’s still a remarkably impressive experience that evolves more and more each year. Most recently including more features and options in the Nether. With Xbox Game Pass Ultimate you can also play it anywhere–on your PC, phone, and on Xbox.