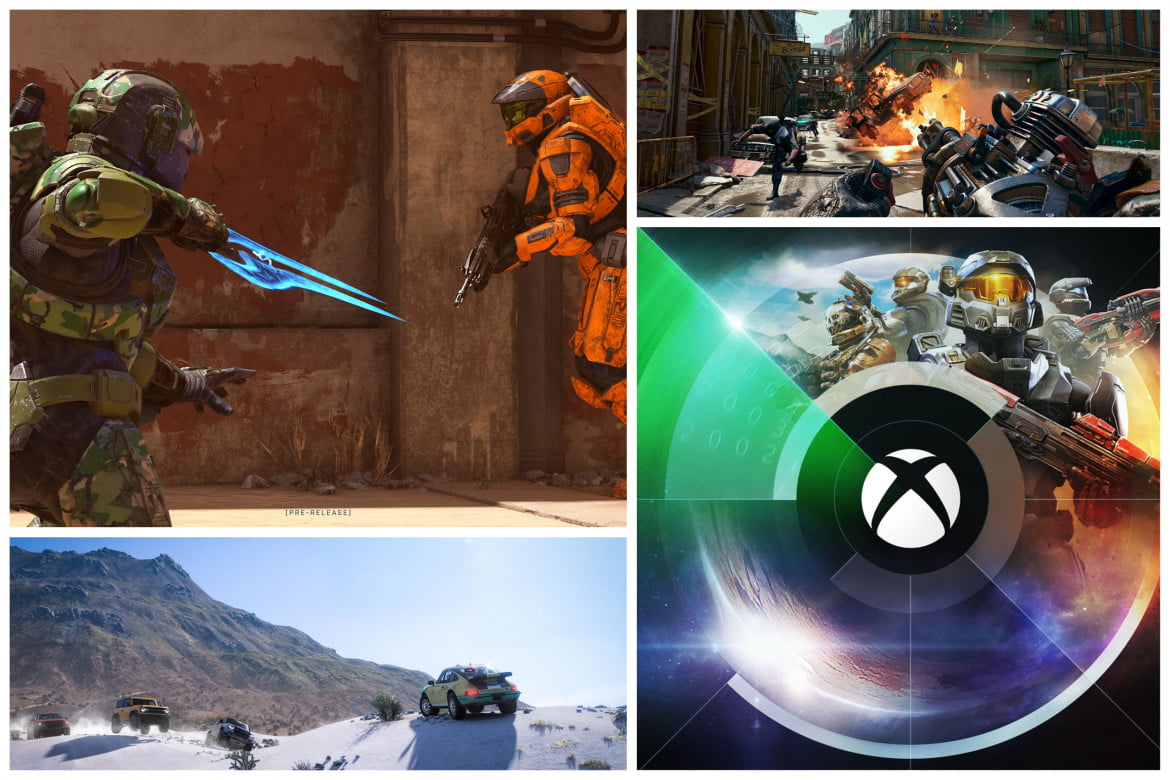 What a way to celebrate 20 years of Xbox.

Xbox hosted their Games Showcase with Bethesda today, during this year’s virtual E3, and beyond the latest Halo Infinite announcement, there were details on more than 20 games coming between now and next year, many of them exclusives.

Before the holidays, Xbox gamers will get Hades, Twelve Minutes, Back 4 Blood, Age of Empires IV, Forza Horizon 5, and Halo Infinite, all coming to Xbox Game Pass subscribers. That means that if you’ve got Game Pass, you can play the games on Xbox the day they launch. Yes, even Halo Infinite.

All of the exclusive titles have either been made or optimized for Xbox Series X and Series S, with Battlefield 2042 boasting 60 fps, while Forza Horizon 5 offers DirectX Raytracing.

Some titles will also be Xbox Series X|S and PC exclusives, like the vampire first person shooter, Redfall. That means gamers still holding onto their Xbox One will need to think about when they want to upgrade.

Xbox also announced that the new Bethesda title Starfield will arrive only on PC and Xbox Series X|S on November 11, 2022.

Starfield is a role-playing game, set “amongst the stars,” that’s in a brand new universe for Bethesda–the first in 25 years for the studio. “Create any character you want and explore with unparalleled freedom as you embark on an epic journey to answer humanity’s greatest mystery.”

This year will mark Xbox’s 20th anniversary, and announcements are expected throughout the year for the big celebration. I’ve been playing Xbox practically since the start, and it feels like a huge milestone as someone who’s covered the games since then, and loved the titles.

I’m also impressed with the way Xbox is making Games Pass a huge part of the Xbox experience. It feels like a smart move when so many gamers want to play as many titles as possible, and find their favourites.

Here’s the rundown of many of the key titles announced today. Read more on Xbox Wire.

Halo Infinite will launch this holiday with free-to-play multiplayer, for the first time ever, and features reimagined “legendary multiplayer combat” with seasonal updates, new maps and modes, as well as community focused content. “Players can explore endless combat possibilities by mixing and matching a rich variety of on-map weapons and equipment to experience unique gameplay that feels distinctly Halo.” Coming to Xbox Series X|S, Xbox One, PC.

Forza Horizon 5 heads to Mexico this time. The trailer featured music by Arkells, and Xbox teased it as a “vibrant and ever-evolving open world” that was filled with “limitless, fun driving action in hundreds of the world’s greatest cars.” The game arrives on November 9. Coming to Xbox Series X|S, Xbox One, PC.

Redfall was my favourite game reveal today, and it’s a co-op, open-world, first-person shooter from Arkane Austin. Gameplay will be solo or as a team, taking on a “legion of vampires that have overtaken the once-quaint island town of Redfall. In signature Arkane style, you will choose your path across the island and through the vampire masses as you discover what caused this plague of bloodsuckers and put an end to the threat.”

S.T.A.L.K.E.R. 2: The award-winning PC franchise loved by millions of players is making a true next-gen console debut. Experience a unique blend of first-person shooter, immersive sim and horror. The Chernobyl Exclusion Zone is a unique, dangerous and ever-changing environment. It promises a lot–the artifacts of unbelievable value can be yours if you dare to claim them. The price you may pay, on the other hand, is no less than your own life. One of the biggest open worlds to date, filled with radiation, mutants and anomalies, is yours to explore.

Age of Empires IV is coming to Xbox Game Pass for PC and Ultimate, Windows Store and Steam on October 28. There will be two new launch civilizations–the Abbasid Dynasty and the French. During the previuew, Xbox also showcased the 100 Years War campaign with history icon Joan of Arc, allowing players to experience this long-fought conflict between England and France.

Back 4 Blood from Warner Bros Interactive Entertainment and Turtle Rock Studios is a thrilling cooperative first-person shooter from the creators of the critically acclaimed Left 4 Dead franchise. Experience the intense 4 player co-op narrative campaign, competitive multiplayer as human or Ridden, and frenetic gameplay that keeps you in the action. Coming on day one with Xbox Game Pass on PC, cloud, and console.

Hades from Supergiant Games has won over 50 Game of the Year awards, and it’s a rogue-like dungeon crawler where you wield the powers and mythic weapons of Olympus to break free from the clutches of the god of the dead himself, while growing stronger and unraveling more of the story with each unique escape attempt.

Sea of Thieves: A Pirate’s Life brings Disney’s Pirates of the Caribbean to the game in a Season Three crossover event that’s an an epic original story. The event will feature Captain Jack Sparrow and his crew sailing in from beyond the horizon to spark new adventures spanning five narrative-driven Tall Tales.

Far Cry 6 from Ubisoft was first teased last night during Ubisoft’s E3 presentation, and brings you to Yara, a tropical paradise frozen in time. Far Cry 6 immerses players into the adrenaline-filled world of a modern-day guerrilla revolution. As dictator of Yara, Antón Castillo is intent on restoring his nation back to its former glory by any means, with his son, Diego, following in his bloody footsteps. Playing as local Yaran Dani Rojas, join revolutionary group Libertad and fight your way to Esperanza to take down Antón Castillo and his oppressive regime.

Battlefield 2042 from Electronic Arts and DICE is a groundbreaking first-person shooter set to revolutionize the modern multiplayer sandbox. The game drops players into a near-future, all-out-war experience that includes the franchise’s hallmark, game-changing destruction. Featuring matches on maps optimized for 64 players on Xbox One, then up to 128 players on Xbox Series X|S, this unprecedented scale adds a new dimension to multiplayer battles. Battlefield 2042 also ups the action with the inclusion of real-time events that reshape the battlefield and tactical combat.

Diablo II: Resurrected from Blizzard Entertainment is a remastering of the classic game with the Lord of Destruction expansion. New and veteran players alike can now experience Diablo II’s timeless gameplay with modern visuals and audio that take advantage of today’s gaming hardware. The title will be coming to Windows PC, Xbox Series X|S, and Xbox One on September 23, 2021.

A Plague Tale: Requiem from Focus Home Interactive and Asobo Studio follows the first award-winning adventure, with Amicia and her brother Hugo on an intense new quest for hope, as a terrifying curse hunts them down. Sacrifice your innocence to save the one you love, facing the savagery of a collapsing world as it’s overwhelmed in a sea of teeth and claws. The game arrives on Xbox Series X|S and with Xbox Game Pass day one in 2022.

Party Animals from Recreate Games puts you in a with or against your friends. Pick your character from a diverse cast of adorable animals as you battle it out across multiple game modes to be the last one left standing in the ultimate competitive brawler. Paw up, grab a plunger, and get ready to party like an animal. Play day one with Xbox Game Pass.

Twelve Minutes from Annapurna Interactive and Luis Antonio could be the indie game of the year, based on the buzz. A romantic evening takes a wrong turn when a police detective breaks into your home, accuses your wife of murder, and knocks you unconscious. In a heartbeat, you are immediately returned to the start of the evening before it all happens again and again. A real-time, interactive thriller, where you will need to use the knowledge of what’s about to happen, to change the outcome and break the twelve-minutes loop. Coming day one with Xbox Game Pass, including PC, cloud, and console.

Somerville from Jumpship is a sci-fi atmospheric adventure set in the wake of catastrophe where you must find the means to make your family whole again. Immerse yourself in a hand-crafted narrative experience set across a vivid rural landscape. Navigate your way through the perilous terrain ahead of you to unravel the mysteries of Earth’s visitors. Play day one with Xbox Game Pass.

Replaced from Coatsink and Sad Cat Studios is a 2.5D sci-fi retro-futuristic action platformer where you play as R.E.A.C.H – an artificial intelligence trapped in a human body against its own will. Replaced combines cinematic platformer, pixel art, and free-flow action combat with a deep engaging dystopian story set in an alternative 1980’s. Explore and uncover the mysteries in and around Phoenix-City from the perspective of R.E.A.C.H. who is learning how to be human in a society that has taken a turn for the worst. Everything is ruled by corruption and greed, The ones in power see humans and their organs as nothing more than just currency. Discover the dark secrets of Phoenix-City. Define your shared future. Play day one with Xbox Game Pass.

It looks like the new Age of Empires shows Joan of Arc wielding a sword taller than she is (LOL) while leading and fighting? Historians have pointed out that she said she DIDN’T fight at all (during the fourth session of her trial, she said she stayed out of the fighting and carried her banner instead), and she also said she didn’t call herself a commander. The Royal military records and numerous eyewitness accounts show that there was always a nobleman in command. Some of the nobles (such as the Duke of Alencon) said they sometimes asked her for advice because they believed she was Divinely inspired, but she didn’t have a formal military command position.

I think there’s a fair bit of liberty the games take with history. I don’t think it’s meant to be a literal representation of history.