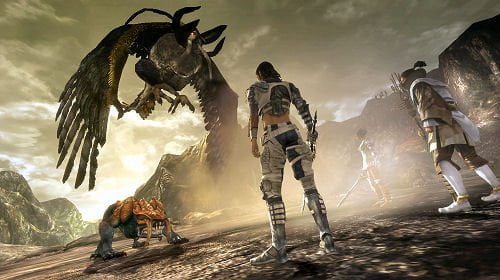 There is a fine line that will define whether or not you enjoy Lost Odyssey: if you are a fan of old-fashioned, turn-based RPGs you’re going to love it. For anyone else, especially for anyone who put a lot of hours into games like Elder Scrolls IV: Oblivion, there is little driving this game, except for stunning visuals and a few somewhat memorable side-plots.

Following the release of Blue Dragon, a previous Xbox 360 title from Hironobu Sakaguchi, Lost Odyssey features a recognizable storyline we have come to expect from more than a few Japanese RPG developers. The game opens with an epic battle, an unexplainable event, and we slowly get introduced to a world where magic and technology are melding together.

Our hero, Kaim Argonar, is right out of the cliché books too. He’s a tortured soul – an immortal one at that – searching for lost memories that will solve the riddle to the troubles of the world. Throughout the game he amasses a group of friends to help him battle his way past numerous creatures and villains.

As with other turn-based RPGs, the world may be somewhat big, but there are always the clearly-set edges on where you can go and what you can do. The same goes for battle, with only the few, standard options to fight, block, use magic, and so on. There is a fairly clever upgrade option for attacks, which uses a ring system, but ultimately it is only a minor diversion within the game.

Gameplay in Lost Odyssey left me yawning most of the time, or annoyed. The fixed-camera angle, with its sloppy and hard to manage zoom, made it maddening to look around most areas, and actually ruins some of the scenes. There is also nothing satisfying about the usual search for objects and the absolutely dumb pedestrians.

On the other hand, there is an impressive skill system that makes a lot of sense, and adds a complexity to upgrading characters. As you play the game your team will consist of human characters and immortals. There is nothing much to say about how the humans work – they advance much the way you would see in any game, but Immortals learn skills from humans and level them up as they gain SP.

I could also go on, and on about Lost Odyssey‘s epic environments and creatures. Walking through any area reveals visuals that should impress even hardcore gamers. Looking back at recent titles, there are few as visually appealing as Sakaguchi’s Lost Odyssey. Magic particles float through the air, monsters feature amazing light and texture effects, and the landscapes and cut scenes are mind-blowing.

The problem is that I still cannot stand this game, even with the visuals and sometimes engrossing side-plots. There are just so many things about the game that feel tacked on, underdeveloped, or excessively silly. The main story is laughable at best, with plot turns worthy of a bad teen fantasy novel. The story tries to be very adult, and certainly succeeds at many points, but no adult could take this story even half seriously. Even the opening scene left me chuckling a bit under my breath.

Dialogue in the game is above average, but there are still hilariously bad moments, as in when one immortal says to our hero, “Isn’t it strange that both of us lost our memory and are immortal?”

There is also something inane about providing endless pages of text to read as you uncover dreams and memories. If I wanted to read a novel I can definitely go out and buy a better one than this. You can at least opt not to read these uncovered memories, but it boggles the mind how someone designing an interactive game would choose to make gamers sit there clicking next through 10-20 screens of pure text.

Lost Odyssey is certainly not without its charms, and there are engaging elements all over the place, but this is not a game I would recommend to anyone except those with a penchant for old-fashioned RPGs. A lot of critics are sure to gush about this game, seeing as how it is by Sakaguchi, but after so many fantastic RPGs recently, there is really not enough charm in this modern rehash to keep me satisfied.