Canada has been known for a long time as a creative and comic hatchery for some of the top artists in Hollywood, but until now, most of our contributions to the world of animation has been limited to American productions, aside from “ReBoot” and “Kevin Spencer“, of course.

The key to what makes “Odd Job Jack” so great though isn’t just its style, wit or comedy. “Odd Job Jack” is brilliant because it also brings the idea of convergence into entertainment – delivering a TV show that is completely reimagined online in the form of games made specific for each episode, behind the scenes info, downloads, a recap of the show with the ability to interact with each full-length episode, and of course, special advertising.

This may make you wonder, what is “Odd Job Jack“?

“Odd Job Jack” is Canada’s first TV series that was originally developed from a concept produced for the Web. Smiley Guy Studios, the company behind creating the show, also calls it the world’s first “sit.com”. The show stars Don McKellar as Jack, a comically oddball twenty-five year old who’s fresh out of university and decidedly unsure what he wants to do with the rest of his life.

“In fiscal desperation, Jack signs on at a temp agency where he finds himself placed in a variety of usual and unusual positions. In every episode, Jack tries out a new job, from security guard to hamster wrangler, which introduces him to an array of interesting characters, unique experiences and different perspectives on the working world.”

It’s through these adventures that we also get all the extras on the website, including the unique perspective of entering Jack’s wacky, weird and wonderful world to find out what a challenge it is to hold down a job. The six-part series also features the voices of stars like Dave Foley, Gary Farmer and Matthew Ferguson.

What I loved most about “Odd Job Jack” is that it feels Canadian, and refers at times to Canadian icons (like, Don McKellar, funnily enough), but it never gets bogged down in things that sometimes make other shows too Canadian. That’s something like how “The Simpsons” deals with being in an ambiguous American town, and proclaims themselves American, but never gets stuck in that “biology” of being specifically about Americans.

“Odd Job Jack” is also pretty damn funny. It’s charm is that it’s extremely funny, without half of the insanity or depravity of shows like “South Park“. Sure, people get chopped up & eaten, dead people get up and dance, and famous people get made fun of, but it’s surprisingly fresh without being utterly offensive.

The show isn’t entirely perfect of course. The animation is extremely unique and looks funky but can also seem a bit weird, some scenes can be a bit slow, and some of the jokes aren’t entirely side-rippingly funny. But all those misses can be overlooked for any one of a dozen other amazing things. Take the always shifting cast of characters for each episode (just like working at a real temp. job), or the way McKellar makes Jack so endearing, or maybe some of the spoofs on movies like Harry Potter (Harry Pothead), Being John Malkovich (Being Don McKellar), and the Bond series in “The Wheel Is Not Enough”.

It’s all a part of why this show could go on to huge success, if it’s given a real chance. For now, it’s only a 6-part series that runs from March 5th to April 9th, but I have a lot of hope that Jack will be back in a continuing show that will get international attention, even if it’s just because OddJobJack.com will have the best content any TV show website has ever had.

And perhaps, that exactly where the future of television lies, in bringing TV shows together more with web content. If that’s the case, I certainly expect that “Odd Job Jack” has a part in making a name for that kind of convergence, but regardless of what happens I’m extremely proud to see a show this funny, and well done, coming out of Canada and I’m excited about the prospect of more sit.com’s and definitely, a lot more of “Odd Job Jack“.

1. “Death & Life” (March 5)
Rated: 8/10
Plot: Jack works as a mortician‘s assistant and locks himself in the freezer. His life flashes before his eyes.
On-Line Game: THE NECRATHLON, Enter and compete in the Necrathlon, the Ancient Sport of Gravediggers.
Review: “A decent introduction into Jack’s world, but it could be a bit funnier. The mystic knife sharpener was a nice touch though and the game, while it is hard, is very addictive!”

2. “I Watch the Watchmen” (March 12)
Rated: 8.5/10
Plot: Jack works as a security guard at a widget company. His friend Leopold Trench hacks and hijacks a spy satellite.
On-Line Game: J’ACKUSE, Monitor and control a panel of security cameras in order to catch a thief.
Review: “Mainly, this episode is a bit of a farce and laugh at the whole ‘Big Brother’ thing, but that’s also why it’s so great!”

3. “The Wheel is Not Enough” (March 19)
Rated: 9/10
Plot: Jack works as a hamster wrangler for prima-donna rodents on a hit Hollywood film series.
On-Line Game: HAMSTER WRANGLER, Corral lively rodents from their dressing rooms to the set on cue.
Review: “If the jokes about Don McKellar (with references to Being John Malkovich) don’t get you laughing, then the jabs at the Bond films will.”

4. “Easy Ryder” (March 26)
Rated: 8.5/10
Plot: Despite objections from his family, Jack works as a test subject at a pharmaceutical company.
On-Line Game: TEST SUBJECT, Complete various tasks under the influence of experimental narcotics.
Review: “Funny and weird at every turn with every possible reference to drugs or drug induced paranoia!”

5. “Waiting for Gordo” (April 2)
Rated: 7.5/10
Plot: Jack works as a waiter at a ritzy restaurant. Jack and Bobby Klaxton (a.k.a. DJ Sherpa) attend a rave and stay out far too late.
On-Line Game: SERVE OR DIE!, Wait on ever-demanding tables while competing against pumped-up fellow waiters.
Review: “One of the grosser episodes that still has some tricky comedy that, none-the-less, pays off in spades.”

6. “Go West, Young Ryder” (April 9)
Rated: 8.5/10
Plot: Jack recounts his heroic tree-planting past over a casual beer with his temporary employment agent, Betty Styles.
On-Line Game: PLANT-MAN, Plant trees while being pursued by Troy Hurtubise, lumberjacks and deadly black flies.
Review: “Hurtubise is actually quite amusing as himself, and the gentle jabs at a couple of celebrities is added incentive to see this very funny episode.” 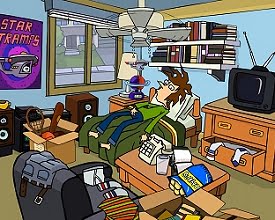 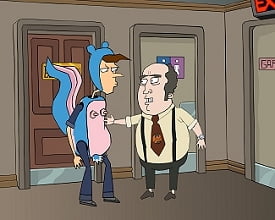 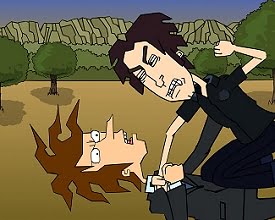 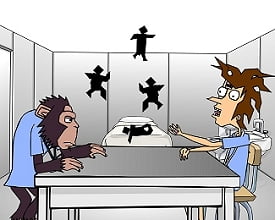 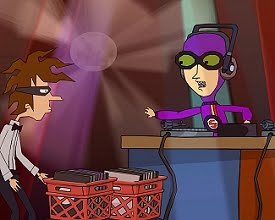 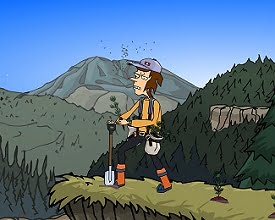