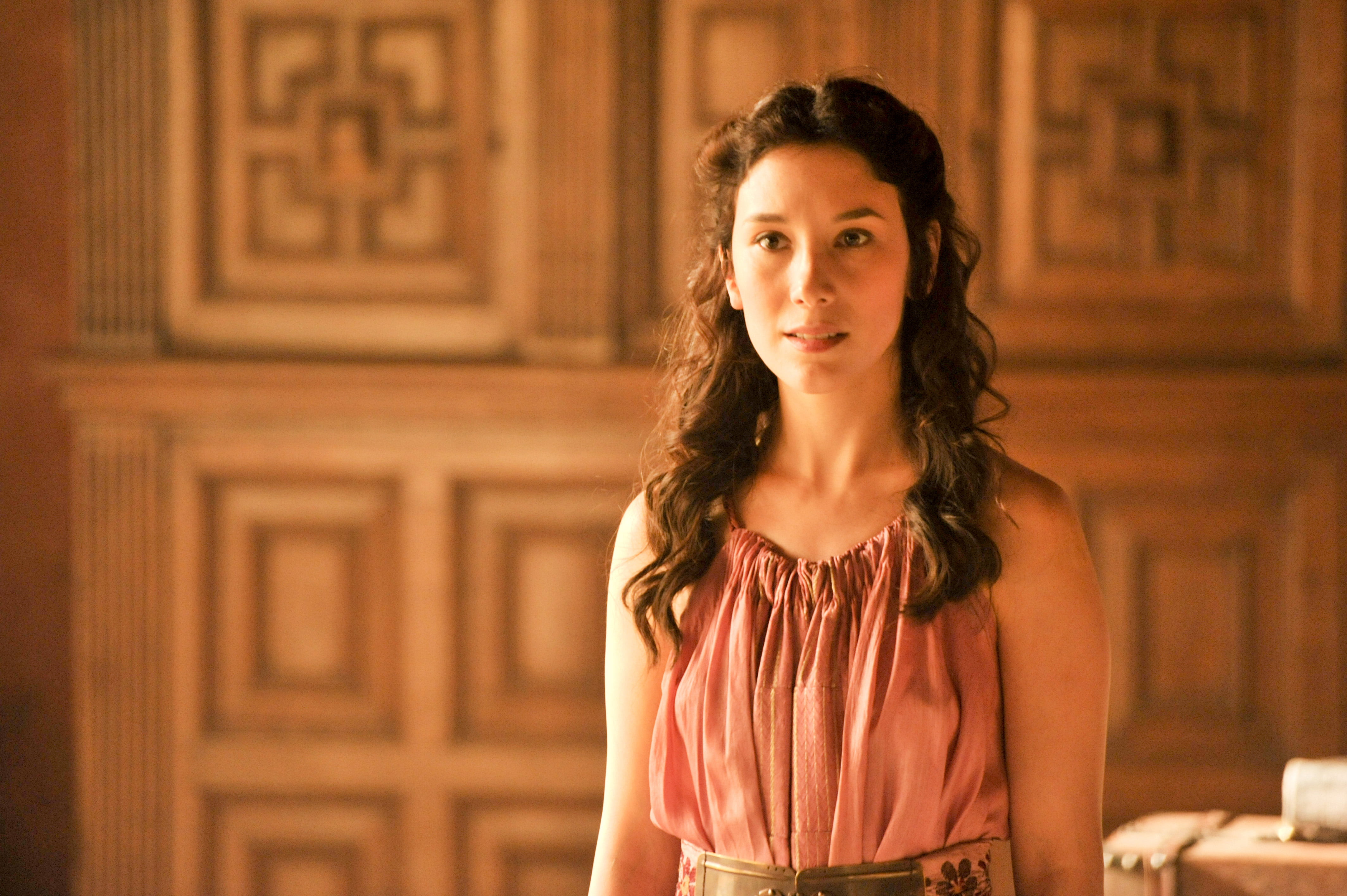 Before the premier of the fourth season of Game of Thrones, actress Sibel Kekilli–better known as Tyrion’s secret girlfriend in the series, Shae–answered questions about her character, how she has changed as the new season begins, and what it’s like being in such a hugely popular series. Read the interview below, and catch Game of Thrones on HBO and HBO Canada Sundays at 9:00 PM (ET/MT).

Question: Set the scene for Shae at the beginning of this season.

Sibel Kekilli: “Last season ended with Varys [Conleth Hill] telling Shae to take a pouch of diamonds and go away. Leave King’s Landing and leave Tyrion [Peter Dinklage], because you are a danger for him, was his point. So I think it will be really hard for Shae because she knows that this idea was not from Lord Varys, it came from Tyrion. Now she has to think about it: does this man love me or is he so afraid of his father that he will want to send her away.”

SK: “At the beginning she was a prostitute and she wanted to work. It was just work for her. But even at the end of the second season she had changed: with Tyrion she was like, ‘I’m not going anywhere if you’re not coming with me.’ By this season she thinks, ‘Even if you’re [Tyrion] nothing in King’s Landing, I will stay here. I am yours.’ And that’s a real love — she doesn’t give a damn about power and those sort of things.”

Q: But she must be realistic in that in this world real love rarely prospers?

SK: “She is but she sees something, she sees a real heart in Tyrion. And she knows that Tyrion loves her, for real. She also knows that Tyrion isn’t Tywin [Charles Dance] or any of the other cruel people around him. So there is hope for her.”

Q: Increasingly you’ve had scenes with characters other than Tyrion, of course…

SK: “Yes, we’ve been doing that since they moved to King’s Landing in the second season. Actually it was really hard for me to do scenes without Peter [Dinklage] at first. When I didn’t have my scenes with him the first time I was like, ‘Where’s Peter?’ I felt naked! But it was great experience to have scenes with Cersei [Lena Headey], with Lord Varys and of course with Sansa, Sophie [Turner].”

Q: How would you describe Shae and Sansa’s relationship?

SK: “Sansa is like a little sister to her, to Shae. Shae really loves Sansa and she has this feeling that she should be responsible for her – because Shae has had such a hard life, she doesn’t want to have the same for Sansa. She saw her father dying. Sansa lost her family. It was hard and Shae thinks, ‘Now I’m here I will do anything for you,’ to protect her — she would kill for her. Anything to make sure she doesn’t have any more bad experiences.”

Q: How much do you know of Shae’s backstory?

SK: “I don’t know it all but that’s the way I like it — that makes her secret. People would get really bored if you could read her like a book, so it’s really nice to never know who Shae is, what she did, and her whole life story. Anyway, you don’t have to know it: you can see the pain in her eyes and in her face. Of course there have been some points, like when she said to Lord Varys about how when she was nine years old and she had to leave home. But for me it’s helpful not to build up her whole love and life story. She should have her little secrets, even from myself.”

Q: She began as a prostitute. But she obviously sees herself as much more than that…

SK: “Absolutely! She never thought about herself like that. And she never took pity on herself — ‘Oh I’m a poor girl. I’m a prostitute.’ She was always a fighter and that’s the reason she is not afraid of anyone. She’ll go to Tyrion, ‘I don’t care if people are afraid of you. I’m not.’ That was also the reason why she was really tough when they met for the first time. Okay, you want something from me? What will I get from you? She never would think about herself as a prostitute, never. She always was full of pride.”

Q: As you say she’s also a realist. Does she actually think she can be with Tyrion?

SK: “You know, if you love someone your hope never ends. It’s really like that and of course she’s hoping because, you know she sees that he really does love her and she loves him. So there’s still a small hope. Even if he gets married to Sansa, she still hopes that they can be together.”

Q: What does it feel like to be in a series of this scale and popularity?

SK: “It’s a bit scary! That was the reason I didn’t want to watch the show for the first two years. Everyone, Dan [Weiss], David [Benioff] said, ‘Sibel, you’ve got to watch the show!’ And I was like, ‘I can’t! I will be scared because it’s big.’ And the second series was bigger than the first of course and the third bigger than the second and I was like, ‘I don’t want to feel lost or that I’m a little, little part of this world.’ But I had to watch it eventually.”

Q: What sort of reaction do you get from the fans?

SK: “Let’s just say I’m really happy to not be Cersei or Joffrey [Jack Gleeson] — they love to hate them! In the beginning it was really hard because though I hadn’t read the books, friends told me, ‘Ah, Sibel, they don’t trust you, they don’t trust Shae because they love Peter, so they are really scared that you might hurt him.’ Now I think they see the real heart of Shae and they like her more and more.”

Q: Peter seems quite stern on camera. What is he like in person?

SK: “He is really… I learnt a new word — he is witty. He has a sharp wit and I love that. There are two sorts of actors. One is really all ego and just taking care of themselves; the other type of actor is an actor like Peter — they act with their eyes. They react to how you act. They listen to you. And this is a really, really big gift for you as their colleague because then you enjoy it. You think, ‘He is taking me seriously. He respects me, he respects my work.'”

Q: What’s it like on the set? Is it much more relaxed or is it quite tense there too?

SK: “On set it’s really relaxed. They’re making jokes of my English. Teasing me all the time. People tell jokes and I’ll go, ‘What? Say it again, I didn’t get it yet.'”

Q: Are there any other characters on the show you’d like to play?

SK: “I would love to play, of course, Cersei’s character. Because she has so many layers, like all of the female characters. Cersei is really manipulative and she can be evil at the same time as good — she has such different levels to act and I love that.”

Q: How did you react to the Red Wedding last season?

SK: “I was thinking, ‘No they’re not doing that…’ and then they did. I thought maybe Oona [Chaplin], because her character was pregnant, maybe she would stay alive. And then I was hoping it would be like the Dallas episode where Bobby woke up and came out of the shower: ‘It was a dream! It was a dream!’ But it wasn’t. All I will say is that we have moments like that in the fourth season, more than once I think. From season to season they’re topping the one that went before. So I think the fourth season will top the third season.”