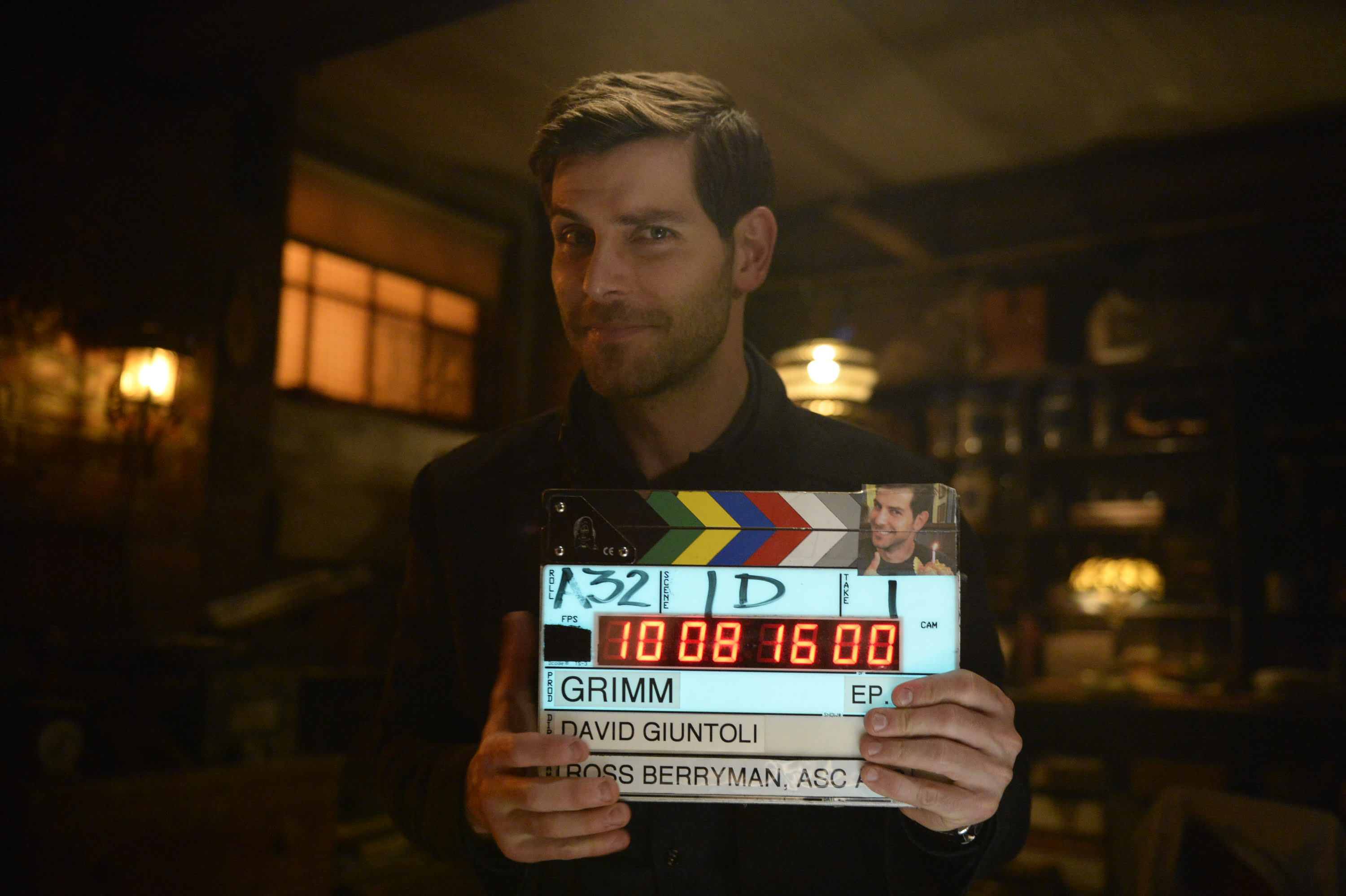 It’s do or die time on Grimm’s sixth and final season. Detective Nick Burkhardt’s (David Giuntoli) boss, former frenemy and current mayor, Captain Sean Renard (Sasha Roiz) is out for blood. To achieve his ambitions and climb the political ranks, Renard will eliminate anything standing in his way–including Nick. At the same time, a magical artifact seems to have a strange hold over Nick. His love life is in shambles now that both Adalind (Claire Coffee) and Eve/Juliette (Bitsie Tulloch) are in the picture. So, what’s a Grimm to do?

Giuntoli recently spoke with The GATE about Nick’s last stand, his supernatural addiction, making a big move against Renard and the possibility of more Grimm in the future. In addition, Giuntoli talked about his directorial debut this Friday.

Watch the final season of Grimm on NBC in the U.S. and CTV in Canada.

Last time we chatted, you wanted Grimm’s final season to focus on the core characters. How happy are you with the way the writers have attacked these final 13 episodes?

David Giuntoli: It’s exactly what I hoped for. I had no specific plot point desires really. I wanted it to be big and I wanted it to be final. That has certainly been achieved. It really is the core characters, including Trubel (Jacqueline Toboni) a little bit. It’s far less Wesen-of-the-week, although we’ll see a little bit of that in the middle of the season. Then, towards the end of the season, it’s the one through eight on the call sheet.

What kind of closure were you hoping for Nick?

Giuntoli: Things are clearly not going well for Nick. One of the arcs of the series would be… in episode one, he finds out he’s a Grimm. He’s this confused, in denial, little cop-boy detective, with a boy-detective haircut. He may as well have been a Hardy Boy.

He had been warned by his mother and his aunt–all of these Grimms that became before him – saying, “You must leave Juliette now. You cannot be with your son. These relationships you keep around you are in peril from your Grimm destiny. You can’t have both.” His aunt lived in a trailer, going from state to state, fighting Wesen and having no relationships at all. And she was killed. My mother was beheaded, for God’s sake. Here I have kept my Scooby Gang of friends and they are always in harm’s way. I feel the closer I am to somebody, the more their life is completely derailed. That continues to happen this season. I think Nick’s closure and arc is going to be his full acceptance of his responsibility and what that means for the rest of his life. He has to say goodbye to a lot of stuff.

So far, Nick and Renard have done plenty of posturing and moving people around like chess pieces. They haven’t directly confronted each other. In what ways do things escalate this week?

Giuntoli: This week’s episode, which I directed, has one of the greatest fights we’ll ever see in Grimm, both in it’s creativity and where it takes place and who is fighting in it. We haven’t seen anything like this before on Grimm. It was a pain in my ass to direct, but I did it, with the help of everyone. It was very difficult to achieve and you’ll see why.

There’s some interesting mistaken identity, Grimm-style, when Nick transforms into Renard. How challenging was that to pull off?

Giuntoli: Yeah, it was like, “How are we going to do this? Let’s talk.” Nick and Renard have different personas, so we had to figure out what Nick does, and what Renard does, and heighten them. Nick constantly has his hands on his hips. He cocks his head to one side. It was a funny episode. The creators of the show and I wanted to milk that a little more. We did. We could have cut it in a different way, where it would have been a complete comedy, so we had to take some of the stuff out because it was too silly. I haven’t worked with a green screen. We had never done that. We had never done split-screen stuff or two-person in one-shot, green-screen stuff. We had to figure that out as we were going.

Why was it finally time for you to step behind the camera?

Giuntoli: Now was a good time to direct an episode because the series is at the end of its run. It took me that long to convince people I wouldn’t completely screw it up, which I’m surprised they let me do it at all. I had no directing experience, whatsoever. I prepared my butt off. I did all of my homework. I think I did a really good job. I had a wonderful time doing it. Getting behind the camera – when you are acting, a small percentage of your brain is lit up. That saying that you only use 10 percent of your brain, well, when you are directing, it’s 100 percent. It is everything.

Looking forward, what’s the deal with this little magic stick and how is it affecting Nick’s decision-making?

Giuntoli: It’s bad. He’s hiding it from the rest of the gang. It has a hold on him. It’s his crack. It’s his heroin. He doesn’t quite understand why. I think he’s afraid of it. It becomes the major element of this season.

Nick’s love life is also complicated. What kind of resolution can viewers expect?

Giuntoli: Those things never resolve themselves on their own, do they? It becomes more complicated when Eve turns into Juliette’s form a little bit more. My gosh. Nick’s holding a candle for her. I wish Adalind and Juliette could just kiss and then we could ship them. Nick can just stay out of it completely, but, alas, no.

What else can you tease about the series finale?

Giuntoli: We’re going to have some people back that we haven’t seen in a very long time. The fans are going to be very happy to see these people. I would say they are fan-favourites. There are a ton of deaths. A lot of cast members have been off for a while. There are a lot of tears with saying goodbye to people. They did a wonderful job. It’s a sad episode. It’s a poignant episode that delivers a lot of heart-wrenching moments. And, you’ll also smile a bit, which is good.

Is this the end of Nick Burkhardt and Grimm? Could there be more adventures someday, even in another format?

Giuntoli: Of course, there could be more someday. There could be a Trubel spinoff and I’ll appear now and then. The problem is we all have different lives now. Once you are set off, it’s hard to get us all together again. Who knows? Anything is possible. I’m sure we’d all love to do it.

What would you like to say to those loyal fans who have tuned in week after week?

Giuntoli: Thank you, fans. One of the best parts of the job is when you have the rare opportunity to go meet people one on one. It’s so wonderful. We read the tweets. We hear the feedback. It actually helped steer some of the storylines. It has been the best project I’ve ever been a part of. I don’t think anything will ever match it. It’s like a family, and they are all a part of it.

This has been your longest-running gig. You were #1 on the call sheet. What is your biggest takeaway from the Grimm experience?

Giuntoli: I’ll say this. We’re on location. We all uprooted our lives and came to Portland, Oregon. None of us were big stars when we started. I think the result was this family we created. That’s probably my proudest achievement on this show. There’s been thousands of guest actors who have worked on our show. I’ll always hear from my actor friends, who meet somebody who was on the show, and they always say, “The cast and crew are so laid back. It’s such a fun experience,” which is not always the case on shows. We really created a family out here. The cast and crew are part of my family. Portland, too, is part of the family. We were really involved in the community. That’s the crowning achievement.