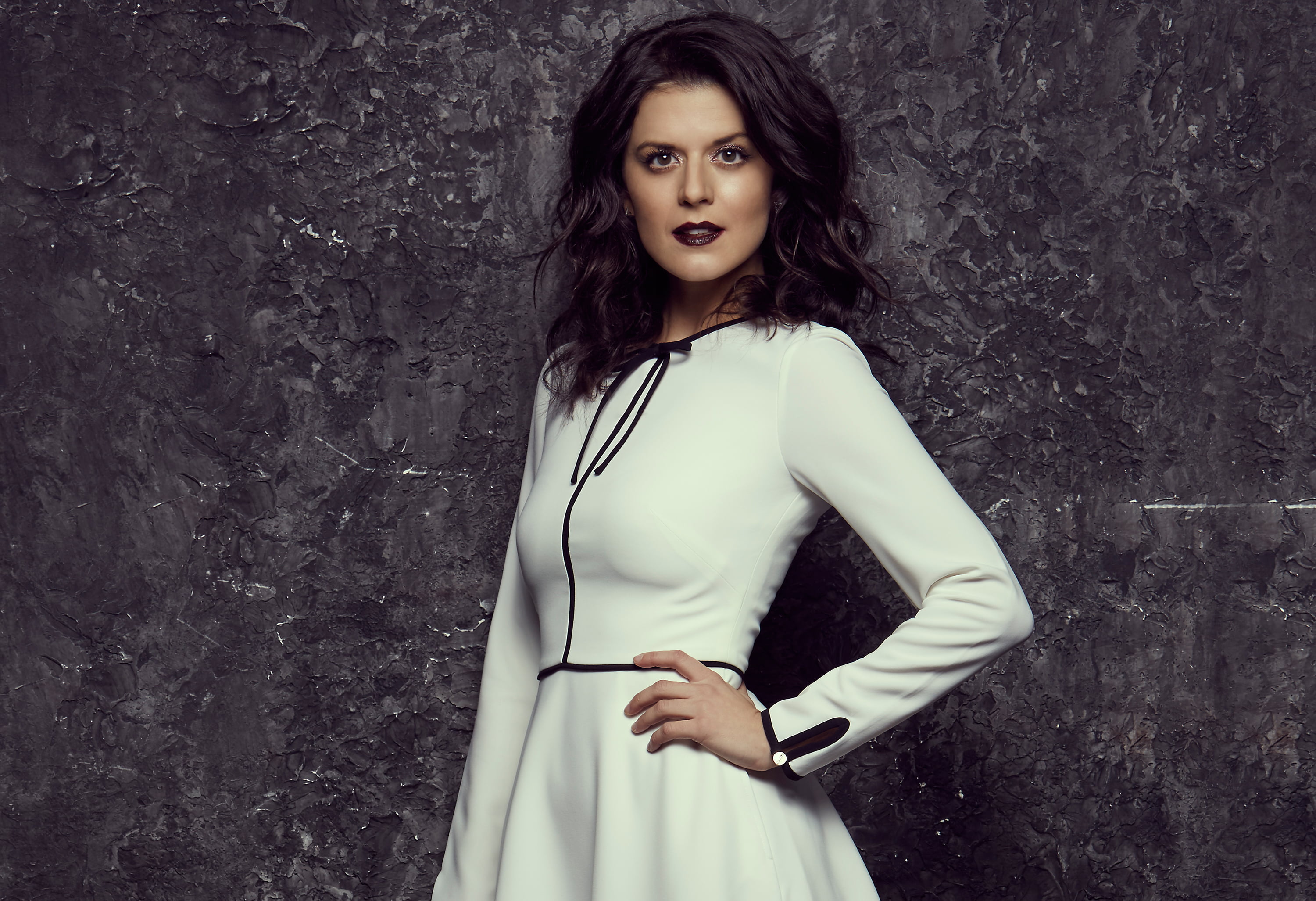 Three is not a crowd in You Me Her. The rom-com series’ first season found suburban couple Jack (Greg Poehler) and Emma (Rachel Blanchard) in a marital rut. An impulsive “date” between Jack and grad student-turned-neophyte escort Izzy (Priscilla Faia) evolved into an unexpected three-way affair with Emma, who was harboring her own secrets and desires. The trio developed strong feelings for one another, which snowballed into a meaningful relationship.

When season two returns on February 14, things are more complicated than ever. Izzy has moved in with Jack and Emma. Their living arrangement is out in the open. Can this unconventional romance thrive in a society based on tradition and that clearly defines what love should be?

Faia recently spoke with The GATE about shifting creative gears after Rookie Blue, why this “thromance” works, raising the emotional stakes and how it feels to defy stereotypes.

After Rookie Blue, were you looking to do something completely different or did this series just fall into your lap?

Priscilla Faia: “It was a little bit of both. Most actors or artists desire to change up what they’ve been doing. I really enjoyed playing Chloe and being a police officer and all that entailed. But, I wanted to spread my wings a little bit and try new things.”

“I was auditioning. There were some great projects I had my hands on and then out of nowhere, as it always happens, I got this 16-page audition. I remember my agent telling me it was 16 pages. I was like, ‘That’s insane, that it’s 16 pages.’ But, of course, I am going to look at it and it was the next day. There wasn’t much prep time. I read the first page and in my gut, I was like, ‘This is my next show.’ I immediately fell in love with Izzy. She was so complicated.”

“My audition scene was my dates with Emma and then with Jack. I got a sense of her relationship with both of them right from the get-go. I just had this gut feeling, I was intrigued by who Izzy was as a person. I did a tape with the casting director. I then got a phone call and read for Nisha Ganatra, who directed our first season. We did it again in a room and before I knew it, we were prepping. I felt great to not only be a part of the show, but also because I found out a few days later that Greg and Rachel were going to be my co-stars. I was very excited.”

This series lives and dies on the cast’s chemistry. How much of that was a work in progress or was it easy to forge that synergy right away?

Faia: “Again, a little bit of both. We were extremely lucky because Nisha made sure we had five days of rehearsal. She had the three of us in a room together. We didn’t look at the script. We didn’t do any on-script rehearsal. We just did old-school acting techniques. There was a lot of movement together, so we were finding our physical connection and our spiritual connection together, which was the most-helpful thing. We shot the show in seven or eight weeks. In one day, we’ll be shooting a scene from episode 6 and then episode 3. There’s no time to find our way as we were going. Having that time with the director was imperative for our connection. Greg and Rachel are such incredible humans. It takes people who are willing to fall into doing these sorts of techniques. For the last day of rehearsal, Nisha brought in our supporting cast, which was also really important.”

What about this unconventional love triangle fills specific holes in the characters’ lives?

Faia: “We look for things to fill us when we are feeling empty. Jack and Emma have been struggling for a long time. Their energy tank is a little depleted. Into their lives comes this energetic woman, who brings life back into the room, brings light back into their lives. It can be life-changing, as we see as the season progresses. For Izzy, she has a lot of issues surrounding relationships. She’s a child of divorce and it affected her in a way where she’s quite afraid of anything that’s real. The fact that Jack and Emma were married, and there was this sense of Izzy always being on the outside, was the perfect situation for her. It didn’t require any commitment from her. She gets to come in and out. As we all know, when we get involved with people, dynamics and feelings change. I don’t think she quite anticipated how much she would fall for these people.”

Where do we find this trio in season two?

Faia: “This season is all about what happens now. Now that we’ve all decided we want to do this, what does it look like? We are learning this on the fly. How difficult is it and how do we navigate the odd man out? For Izzy, it’s the realization of how she really does desire more than just being a moving part within this dynamic. Also, they come out to their friends, as you see in the trailer.”

“This season is about bravery. Bravery is living a life that you want, that makes you happy, but it’s nothing like you intended it to look like. We explore the reality of coming out to their friends and the unexpected response they get. I think there’s a misconception of, ‘Oh. What are you talking about?’ We’re past that, I feel. We’re past the judgement of that. In this world, they are much more accepting of those things, so we get to navigate them through that.”

Despite their brave decisions or choices, in what ways are they at a crossroad this year? How have the emotional stakes been raised?

Faia: “There are many emotional stakes. I want to tell you everything about this season, but I can’t. First of all, they’ve all moved in together. What does that look like? Moving in with anybody, whether it be one person or two people, is an adjustment. For Izzy, moving out of the house she shares with her friend, Nina (Melanie Papalia), is a huge change for her. Izzy always thought Nina would be there for her, to come home to. I think Izzy subconsciously can be a little bit selfish when it comes to her life. Nina has always been there to talk through things with her. This season, we explore the supporting characters more, which I love.”

“Nina is going through some changes of her own. Izzy really has to grieve part of her relationship with Nina because Nina is evolving. In order for them to continue being friends, they have to continue to grow. Izzy is dealing with that on the side. In the meantime, she is dealing with the dynamics at home. Jack quit his job. Emma is going through changes of her own. Izzy’s status in this relationship really shifts. She becomes more of an adult and stands up for what she really wants, which is this relationship. The stakes are raised because things are getting more serious. It’s not just about wooing them anymore. It’s about building deep intimate relationships.”

What’s the secret to making an entertaining dramedy, where two genres are combined?

Faia: “This is purely my opinion, but the best comedy can sometimes be over the top and not relatable. To me, I don’t find that funny. When things are very dramatic and serious, you can’t help but laugh. What the secret is involves a good leader, a good director, good writing and actors who don’t play into jokes too much. We try and step away from playing into things, which in turn makes it funnier. With so many great dramas out there like Catastrophe or Casual, where they are comedies and very serious things happen, it’s a great time for television.”

How rewarding has it been to be on a show that breaks stereotypes and fosters conversations about what love really is?

“I love being a part of something that shakes things up. It’s important to have shows where we can think and ask questions and break the barriers. Tradition puts us into boxes and it’s important to celebrate the different communities and creative outlets people have. We’re tapping into this new wave about how people are living their lives. If one person who is stuck in their life watches our show and says, “What if I live my life a different way?” that makes me really happy. I think it’s incredible.” 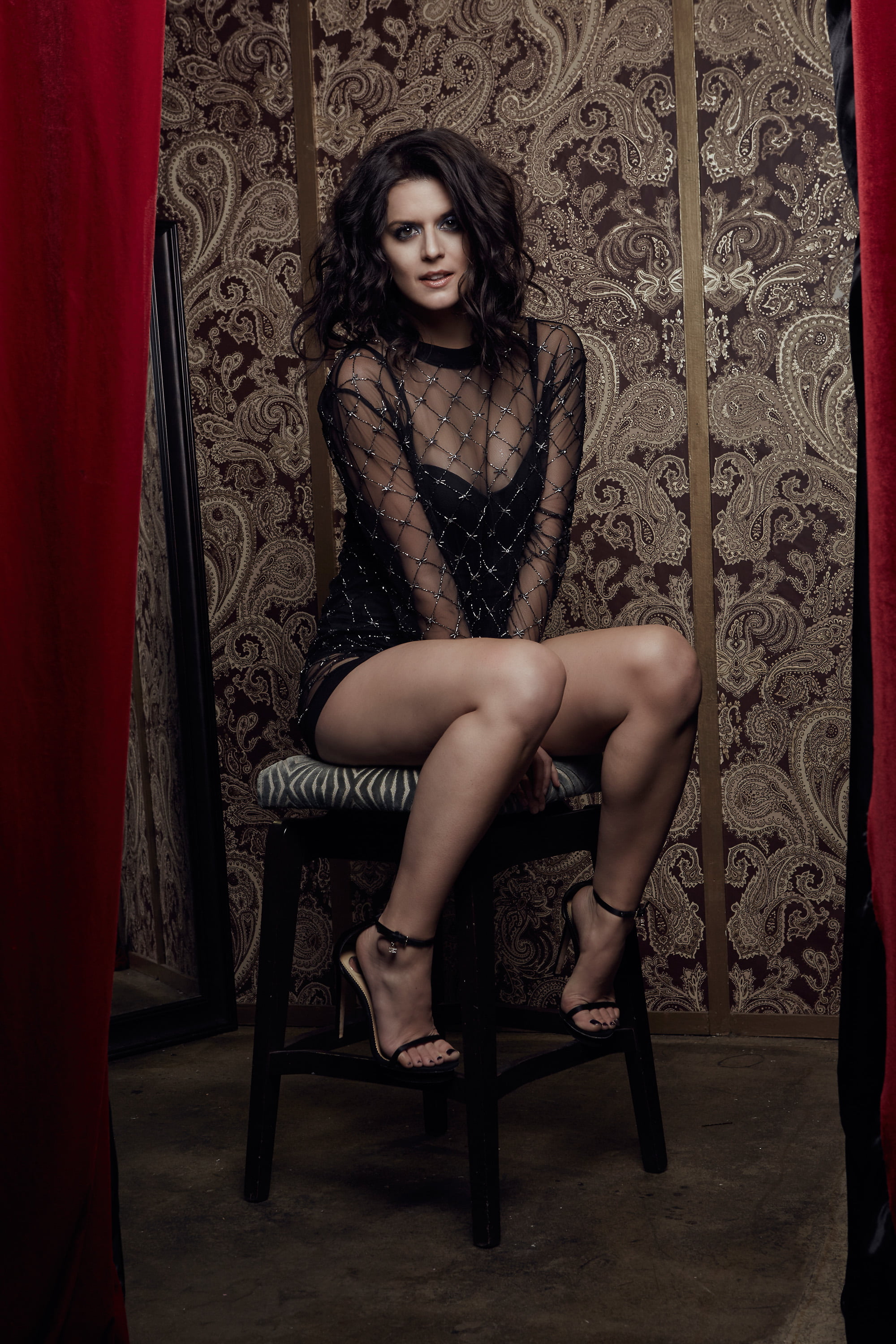 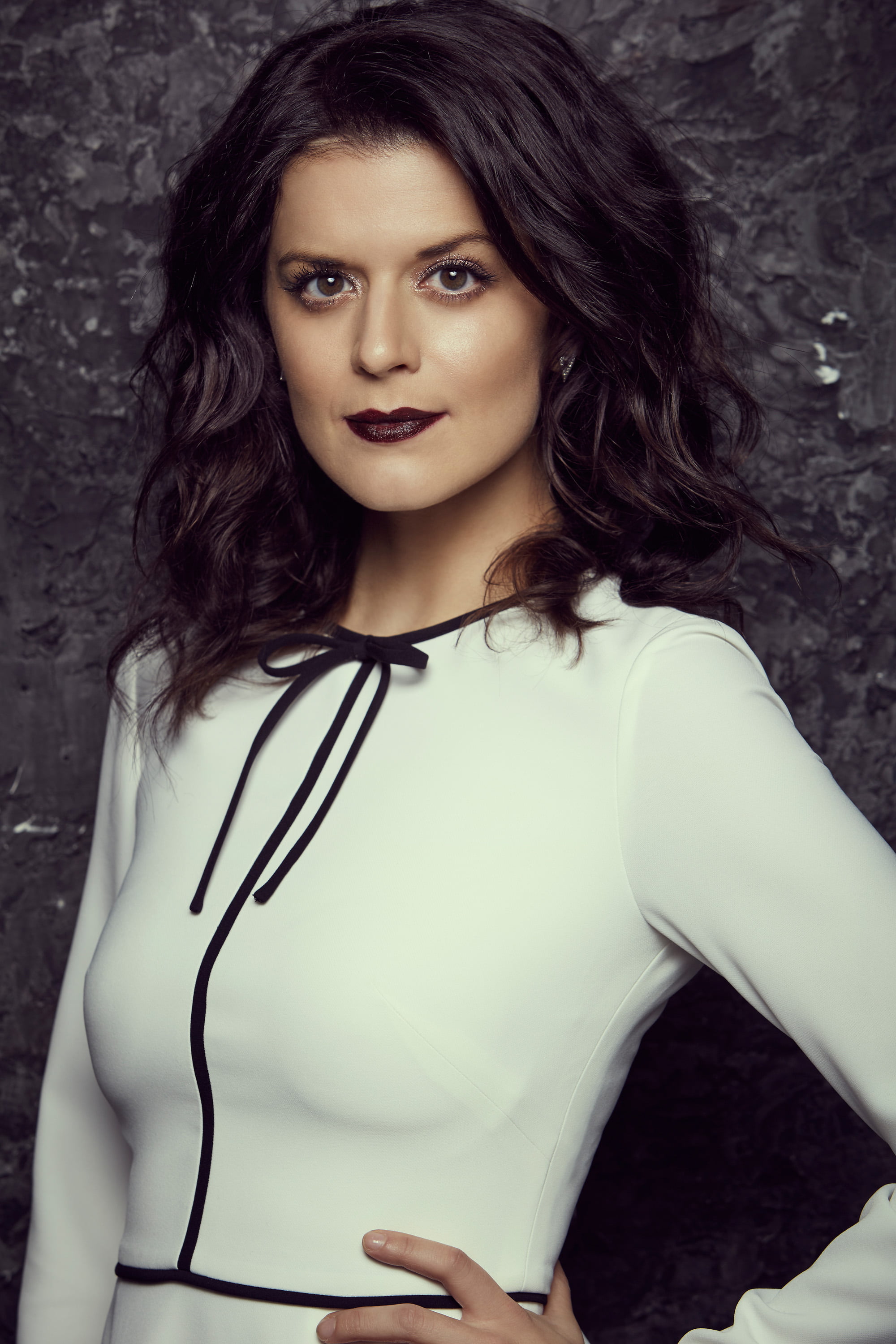 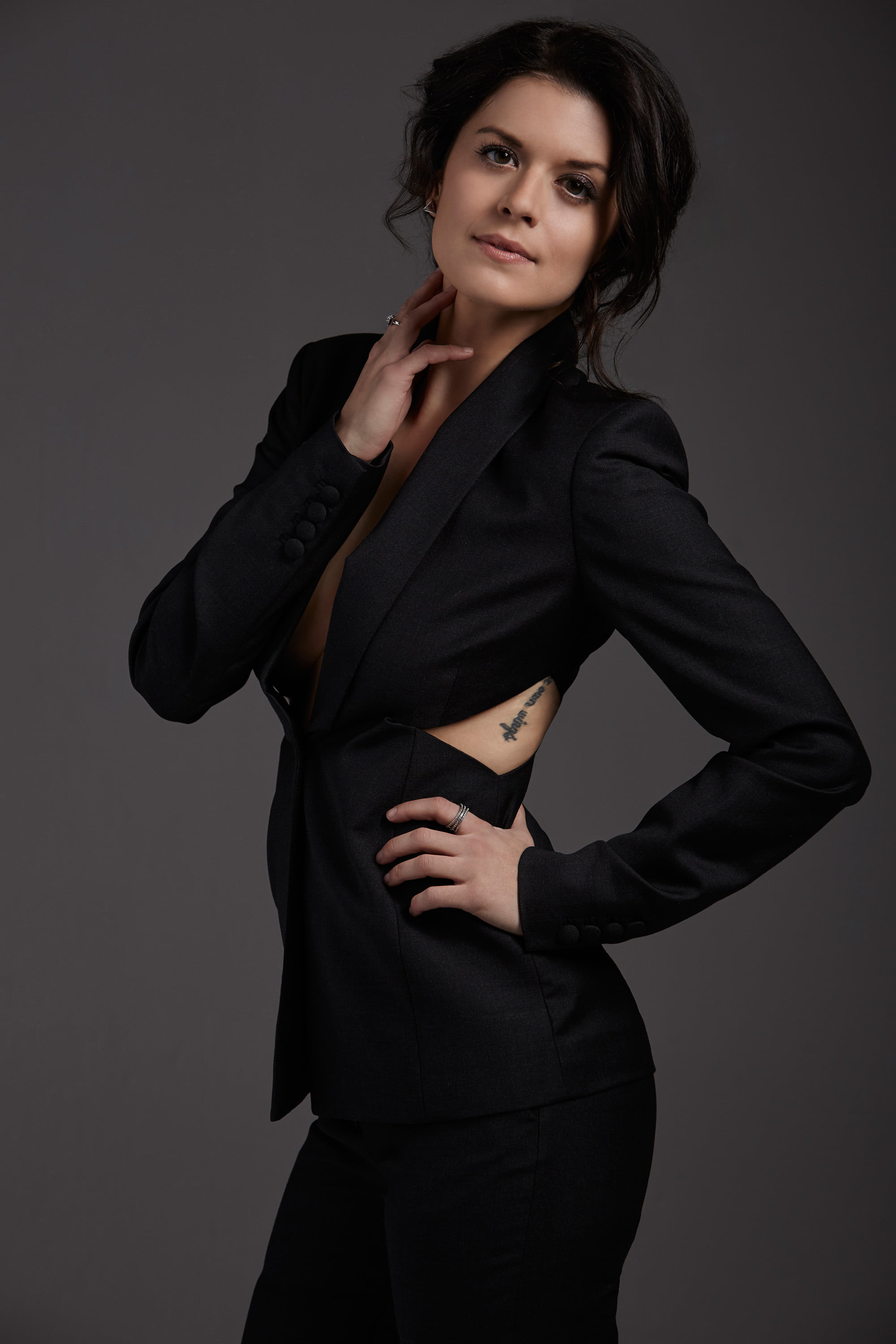 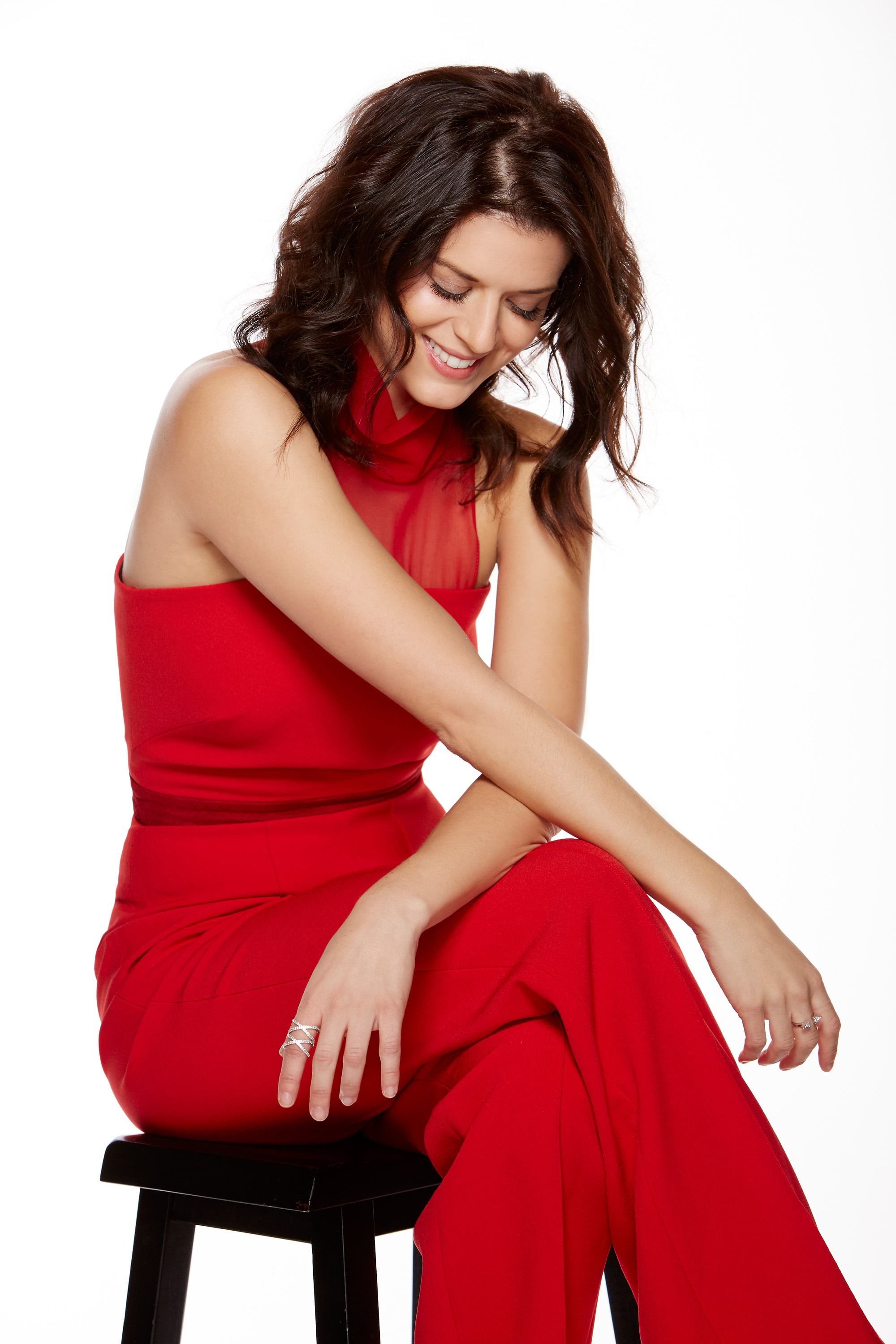 “If one person who is stuck in their life watches our show and says, “What if I live my life a different way?” that makes me really happy. I think it’s incredible.” Just what happened to me. Izzy almost makes my heart hurts :P awesome show, awesome work!