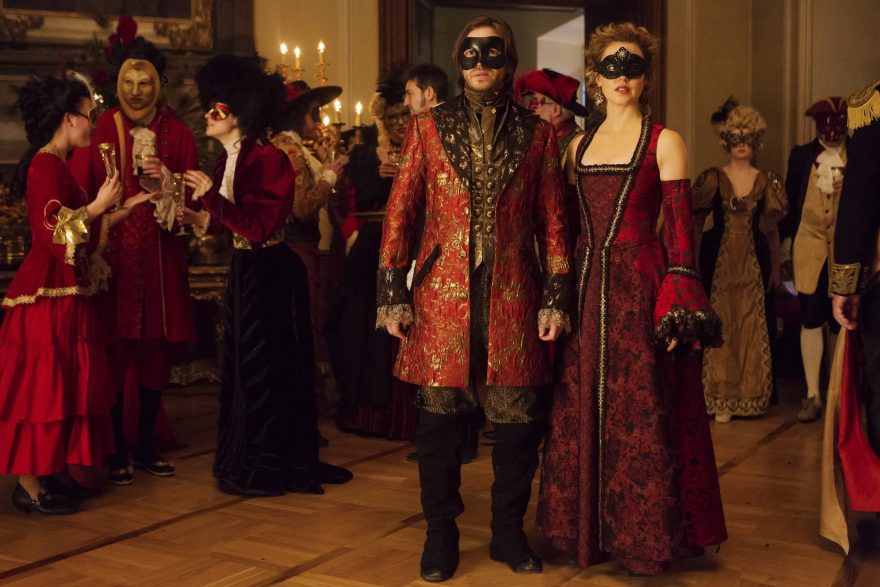 The fate of the timeline and the world hang in the balance in 12 Monkeys. The show began in 2043 with scavenger Cole (Aaron Stanford) splintering back to the year 2015 in order to prevent the Army of the 12 Monkeys from unleashing a virus that would wipe out mankind. Along the way, virologist Cassie Railly (Amanda Schull) and enigmatic math genius Jennifer Goines (Emily Hampshire) joined the cause and have proven integral in thwarting their enemies.

When 12 Monkeys returns on May 19, viewers will be able to binge watch the third season’s entire 10 episodes over three days. The series picks up with Cassie as a prisoner of the Army of the 12 Monkeys. She’s pregnant with a baby destined to become the Witness, the Army’s leader. In the meantime, Cole’s obsession with finding Cassie consumes him. Jennifer is lost in time. The situation seems hopeless for Team Splinter.

On the Toronto set of 12 Monkeys back in April, showrunner Terry Matalas, Stanford, Schull and Hampshire gathered to discuss the show’s third season, Cassie and Cole’s baby woes, Jennifer’s craziness and time-travel shenanigans.

Cassie is experiencing Rosemary’s Baby syndrome, where she has this baby growing inside of her that is destined to become the evil Witness. In what ways is she struggling with maternal instincts versus doing what is best for the greater good?

Amanda Schull: “That’s a daily struggle for her over the course of the first episode and then carrying on through the season. It’s something we’ve discussed, the nature versus nurture. Did they create this or did the Army of the 12 Monkeys? Does she still have the opportunity to nip it in the bud and how does she accomplish that? Can she do it with this child or do they both have to sacrifice themselves for the greater good? It is interesting because showrunner Terry Matalas had told me a little bit. So, during the hiatus between seasons two and three, in my acting class, I did a couple of scenes from Rosemary’s Baby. Obviously, Rosemary didn’t know what she had in her, but, she grappled with it a little bit. I’ve never been pregnant, so it’s interesting to think about the connection that you have. Also, there’s something foreign growing inside of you. Cassie is being told the whole time that he’s the savior of these horrible, cultish monsters. So, is he? Is he going to come out with a mangled, disfigured face? She has no idea what she’s creating.”

In the season-three premiere, Cassie takes some extremely drastic measures. Was she forced into that? Was it strategic? Has she hit rock bottom or was it desperation?

Schull: “At that point, she’s six months pregnant. She’s had no windows of opportunity to escape. She has one window and it closes. It is a split-second decision, but, at the same time, knowing that window closed – and there probably won’t be another before she gives birth, especially now that she screwed the pooch on that one – I believe she thinks it is rock bottom, but only at the moment. This is it. She will have to sacrifice herself for the greater good and hope the baby forgives her.”

Cassie and Cole’s relationship is complicated. What have you enjoyed about how the writers have handled that dynamic, because they didn’t start off where they are now?

Schull: “One of my favorite things is when Cassie and Cole have an unspoken communication. It’s written often in the script, but not necessary with words. For instance, at the end of episode four, when they look at each other and they have that conversation with everybody standing around them, but it’s only with their eyes. When I read that, I choked up because I thought, ‘That’s their connection.’ They know immediately what the other person has done and what they know. On the day we got to shoot that, Aaron might have said, ‘So, we’re not going to say anything at all?’ Terry said, ‘Yeah, maybe we should give you a couple of lines.’ I was such a proponent of not saying anything. ‘Please, let us try without it.’ Aaron and I have a wonderful working relationship. We’ve become great friends. The very first take, we look at each other and we knew we were going to be able to do it. That’s something I really appreciate, that the writers understand the connection that Cassie and Cole have and that hopefully after four seasons, Aaron and I are able to carry out their imagination on screen. They don’t talk about their feelings a lot, so when they do have an opportunity to discuss their relationship, I get warm and fuzzy.” 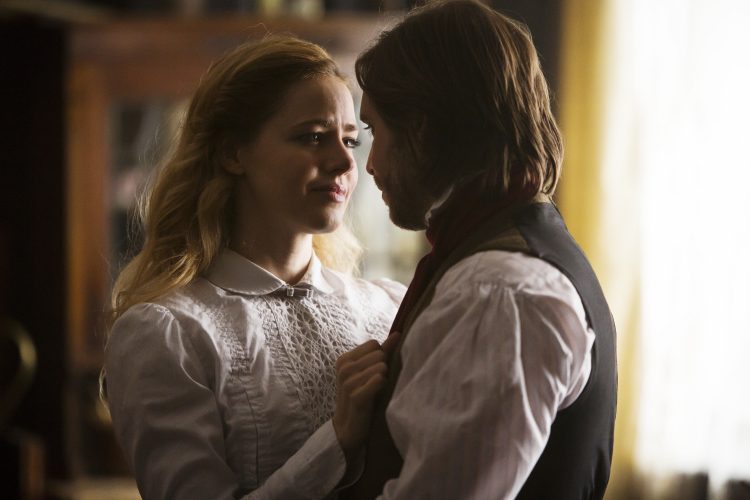 Where do we find Cole at the beginning of season three?

Aaron Stanford: “Cole begins at a real place of desperation. He’s lost Cassie. He’s lost the only real family and life that he’s ever had. He’s just a man on a mission. He’s desperately searching for Cassie and is beginning to lose his mind. He’s unraveling. The rest of the team can see that. They think the mission is hopeless. They’ve been searching for a very long time and he’s the only one who hasn’t given up hope. It was fun to play Cole from that place of desperation, having lost almost everything he has to lose, and barely holding on to his sanity.”

In the beginning, he doesn’t know his unborn son will become the Witness. How does he process that bombshell, and is he on the same page with Cassie on their course of action?

Stanford: “That becomes a bit of a wedge between them. Cassie has had to live with the knowledge for a period of time before she comes into contact with him. She’s had the time to process it in a different way than he does. She’s also carried the child and had an actual relationship with it and interaction with it. For Cole, it’s still more of an abstract idea. They both end up having different perspectives on it. It does create some tension.”

Do you feel the episode Brothers is one of the turning points for Cole?

Stanford: “Absolutely. I don’t want to say why. Brothers is a very intense episode and Cole experiences something that changes him forever.”

Jennifer Goines has this manic energy. How do you maintain that during your scenes? Do you have a case of Red Bull in your trailer?

Emily Hampshire: “I actually do have a case of Coke Zero in my trailer. That’s a bit of an addiction. It’s weird because I do feel like at the end of the day of playing Jennifer, especially when it’s so closely in contrast to the other show I do, where the character is the polar opposite, so, I get to feel like Jennifer is manic energy. At the end of the day, I’m exhausted. During it, I never feel that. It’s like you are on adrenaline and you just feel that rush. Jennifer recharges herself by being spun. She feeds on her own crazy energy. The only thing that feels exhausting is when Jennifer is trying to tell someone something and they think she’s crazy. That drives Jennifer nuts. That’s when it feels frustrating.”

People assume Jennifer is batshit crazy. But, do you feel that craziness makes her more perceptive? In the first few episodes in season three, Jennifer is the one figuring things out and who suspects Olivia has ulterior motives.

Hampshire: “For season one, I always felt Jennifer was the smartest person in the room. In season one, we didn’t know about Primary stuff, so I assumed Jennifer was in a mental hospital and had mental issues. What I’ve felt with anyone experiencing mental health issues is that society thinks they are crazy because they speak the truth. They don’t have that filter when it comes to, ‘Oh, you’re fat or you have something in your face.’ They just say the truth. That’s what Jennifer has or does, but, unfortunately, the truth is so wildly crazy. ‘There’s this thing called the Army of the 12 Monkeys.’ Imagine if that is what someone was saying on the streets. You would think they are schizophrenic. When it’s true, and that’s what her link was initially to Cole – was that he believed.

“But, this season, we’ve come to find her crazy isn’t all that crazy. What interests me the most is her self-confidence in that. I don’t think she initially had it. She relied on people like Cole to give her a sense of purpose and self. She’s in France for five years, on her own. I think a lot of growth happens to Jennifer in that time we don’t see. When Cole comes back, he’s treating Jennifer like he’s always treated her. She’s suddenly seeing that. She always wants to help, but she’s not going to be treated that way any more. She suddenly has this confidence.” 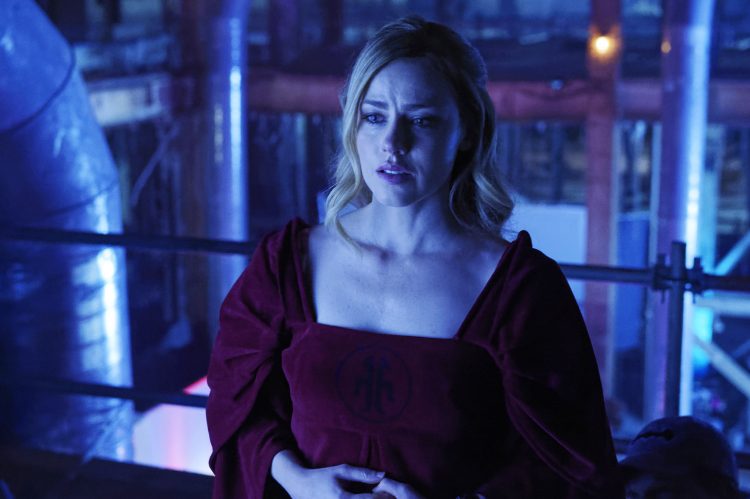 The show established these time-travel rules early on. Can you talk about breaking those rules?

Terry Matalas: “I wouldn’t say we are breaking the rules. They just have new tech. There’s some really cool eye-candy. I don’t know it’s about breaking. I think it’s more about going deeper into. You do serialized time travel like this – I can’t really think of other stories that have gone this long into it and kept the same timeline. The notion of loops and cycles and the snake eating its tail – the Aurora Borealis – is what we are leading to in season four. You set out to solve the problem and discover you were the cause of the problem. It’s that time-travel thing that’s always satisfying when you see it, but what happens this long? How do you stop something that never truly began?”

Season three introduces some time-traveling tech suits. Are we going to find out where they come from?

Do you have to lay out certain rules for the splinter suits so that way you aren’t overusing them?

Matalas: “The first two seasons of the show, the question I used to get from most journalists was, ‘Your writers’ room must have boards of timelines and rules.’ The truth is we didn’t. We were just able to keep it in our head. Season three was the moment we were like, ‘Alright. I think we have to start writing this down.’ When you have someone with that ability, that they see you coming, ‘Fuck you, later.’ Boom! You now have to figure out, ‘How would you beat that guy? How would you take that person out?’ You can’t. What happens in the writers’ room becomes a crisis trying to figure out, ‘Okay, now we have these villains. How do you beat these guys?’ So, we’re all sitting there pitching and writing down the rules of what they can and cannot do. You’ll learn more about the suits and their weaknesses.”

Were you going for a steampunk-esque feel this year with the fact that you were going back farther in time, plus the cool effects?

Matalas: “My dream of dreams is that someone, someday, at some con, would make their own splinter vest. They are really cool. They play an important part of the season. There is a splinter chase coming up down the line, with those suits, with people locked on going through different time periods. We spent a lot of time making sure those were pretty cool. It’s not so much steampunk, but just more the way technology looks on our show. It’s ad hoc and exposed wiring.”

Bryan Cairns
Bryan Cairns is a freelance writer who spends too much time watching television and movies. He can recite the dialogue--and music--from his favourite Hollywood fare: 1991's Beauty and the Beast animated feature, Aliens, and Buffy the Vampire Slayer TV series.