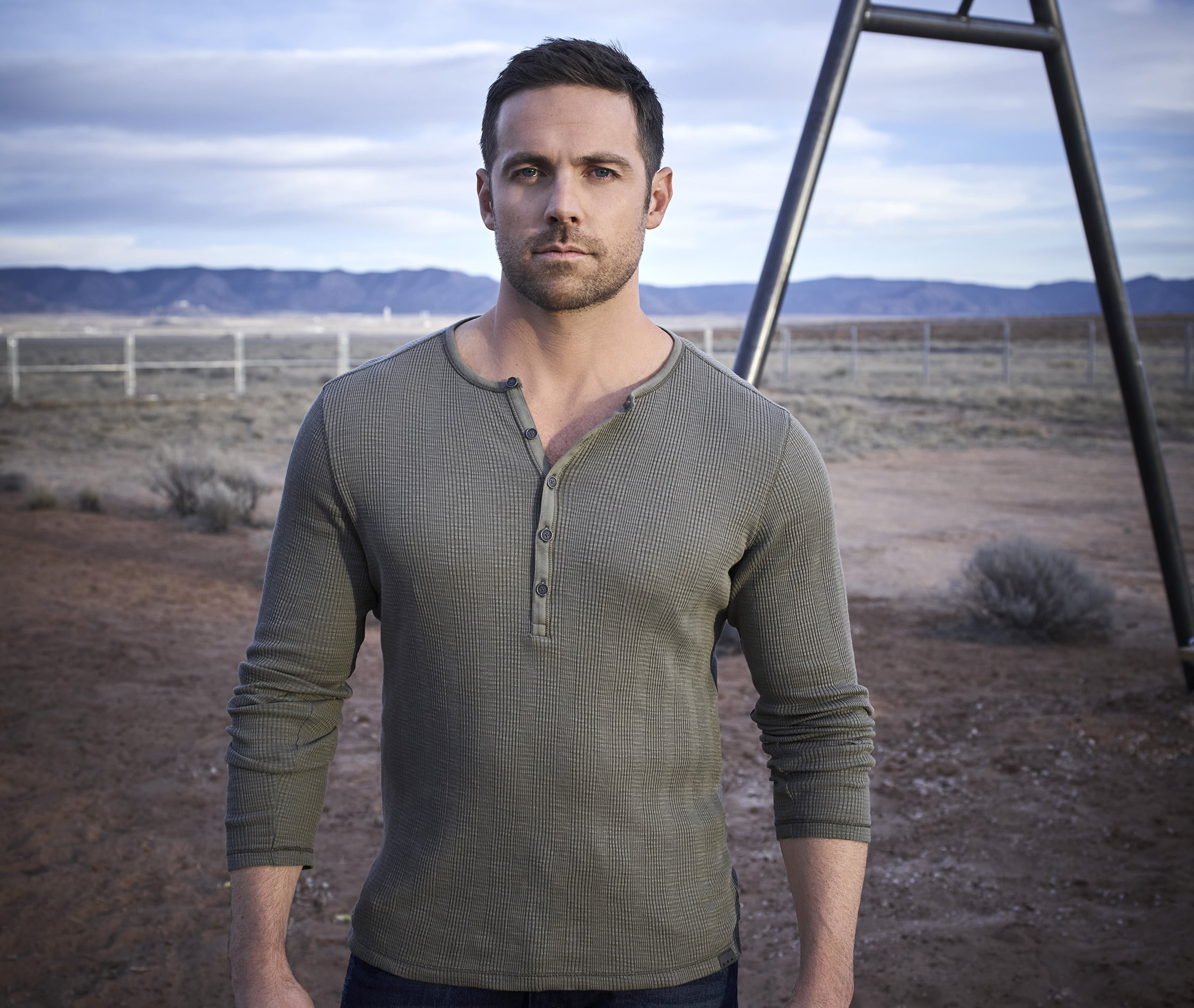 Midnight, Texas provides a safe haven for supernatural and human misfits. The remote town’s residents include a vampire, an angel, a witch and an assassin-for-hire. However, each one of these misfits harbour some deep, dark secrets. Every week, the TV series fills in the blanks for one of the characters. In tonight’s episode, “Unearthed”, pawn shop owner Bobo Winthrop’s (Dylan Bruce) past comes back to haunt him.

Bruce recently spoke with The GATE about shifting gears by playing a good guy, Bobo’s shameful secret and how it mirrors real-world current events. In addition, Bruce reflected on his breakout role, Paul Dierden, on Orphan Black.

There are so many compelling characters on Midnight, Texas. Did you ever audition for any of the more otherworldly leads like Lem, Manfred or Joe? Or, did you always have your eye on Bobo?

Dylan Bruce: “No, I was just called in for Bobo and that was it. I think I was one of the first cast as well, which was cool. It was kind of neat for me to see who they were choosing for roles as the casting progressed. For every new character, there would be a Deadline article. I would be like, “Oh my God, yes! That’s the perfect Olivia! That’s the perfect Fiji!” The producers did a wonderful job finding the actors because I’m sure they auditioned quite a number of people.”

Many projects featured you as the jerk or the villain. How does Bobo break that mold and allow you to stretch some other acting muscles?

Bruce: “It’s fun. He’s a guy from the South, so he has a Southern twang to him, as well as just the way he talks, the way he moves and his mannerisms. But, yeah, it was really neat for me to jump into the life of a different character and something that I haven’t played before.”

“Bobo is a guy who was brought up with a silver-spoon, privileged life. He has quite a shocking turn of events in his past, that has projected him onto the trajectory that he’s on now. But, deep down, he’s a good guy and he masks a lot of his pain and emotions with a smile or kind eyes. But, you can see in those eyes that there’s a lot of hurt and pain. He’s had a rough go at it.”

“He’s in another book series called the Lily Bard series. I think he’s referenced as being a black belt in karate. I love the fact that executive producer Monica Breen decided that after 15 years of just being on the movie and jumping from town to town, that he’s become a fighter and used the skills that he learned at a young age. They’ve been amplified and he can take on nine guys in a jail cell with no problem. It’s just fun playing a guy with a lot of layers as opposed to a one-sided villain.”

A lot of Midnight’s residents are these supernatural misfits. What made this a good place for Bobo to settle down in?

Bruce: “It’s off the map foremost. Secondly, it’s a place where we celebrate the people’s differences. They don’t ask questions about your past. They accept you for who you are. If you don’t have nefarious purposes for coming to Midnight, then you’re welcomed. Bobo, having the past that he has with being on the run – and no one asking questions to why he’s on the run – they just care if he’s a good person or if he has good intentions. That’s what made Midnight a place Bobo wanted to settle in. But, this damn Hellmouth is ruining the whole thing.”

Tonight’s episode, Unearthed, reveals some of the skeletons in Bobo’s closet. What are viewers going to learn?

Bruce: “You find out what is in that bunker of his. Also, it’s an interesting peek into his character and the way someone is brought up and the way they are, whether it’s learned, if it’s because of nurturing or because of their nature. It’s interesting to see Bobo break from what his family might believe in and his true nature to come through … and not fall into the learned, hateful way they led their life. He went on his own and tried to be a good person and make up for what his awful family did.

You couldn’t have known how timely your storyline would be. What’s been your reaction to how it’s mirrored today’s climate?

“There’s no place in the world for racism. It’s disgusting. It’s awful, but I like the fact that Bobo, coming from a racist background, can make a decision for himself to not let that be who he is. His true nature comes through, of being a good person and fighting for what is right. And the fact that he goes to a town like Midnight where people are so different and people accept each other from all different supernatural backgrounds, race, creed or sexual orientation. They don’t care in Midnight. We celebrate the fact that we are different. And, the fact that his family is so anti that – it’s interesting to see Bobo become a good person from such an awful place.”

“The foresight of our writers–to see something like that, to see the ramblings of that in underlying America–to see it at the forefront of the news nowadays and have that happen on our show at the same time is quite shocking. At the same time, it’s always fun to punch a white supremacist in the face.”

What have you enjoyed about Bobo’s relationship with Fiji?

Bruce: “I love working with Parisa. She’s so good at being Fiji. She just encompasses everything I think the character would ever be. And any good relationship, in any good TV show, is not perfect. They are going to have their bumps in the road. She’s harbouring a secret as to why maybe she’s pulling away from Bobo. He was obviously ignorant she had feelings for him, but it was nice to see those feelings explored in the last episode. It’s short-lived, but maybe there’s a reason as to why she pulls away a little harder than some viewers would expect. You’ll find out why at the end of the season.”

What does a human Bobo have to offer against this season’s big bad entity?

Bruce: “Bobo has a pawn shop, and there’s a lot of interesting artifacts in that pawn shop. Maybe some of those old items will come into play. This guy is also useful. He can make a crossbow out of nothing. Bobo is helpful in a lot of ways. Not being a supernatural, he’s at a disadvantage, for sure. But, that doesn’t stop him or any of the non-supernaturals from helping to save their town.”

Bobo gets into some scraps. What’s fun about kicking ass… and getting your ass kicked?

Bruce: “Bobo isn’t Superman, so obviously he’s going to take some bumps and bruises. That’s realistic as far as any fight is concerned. No one comes through unscathed. What I like about him getting bumps and bruises is he has to. He doesn’t have a choice. In the first portion of the episode, he can’t fight back. They have Fiji, and he’s not willing to have them do harm to her. He’s got to take his lumps.”

“The bloodier, the dirtier I get, the more fun I’m having. I really enjoyed it. A lot of these fight scenes, especially the fight in the upcoming episode, is very personal. It’s gritty. It’s violent. It pulls at the heartstrings a bit. And shooting those scenes is tough in New Mexico. That air is really thin. If I’m huffing and puffing on screen, that’s because I really am.”

You’ve been on a roll since Orphan Black. The series finale recently aired. In retrospect, what did that project mean to you both personally and professionally?

Bruce: “It was amazing to be part of something that affected so many people, and that so many people loved. To work with brilliant actors and actresses – and the actress, Tatiana Maslany. It had great writing and was such an intelligent show. Basically, it was something that opened up a lot of doors for me. Tons of opportunities came my way because of Orphan Black, so I’m forever thankful to have played that part.”

“It’s really sad to see it go. Not being on the show any more, I’ve always been a big fan of the series. I love everybody that’s involved with the production of the show. It was a really hard pill to swallow, but they went out on a high note. I’m sure Tatiana is truly exhausted and deserves as much rest coming her way. I’m sure it’s going to be short-lived, because that cast is so talented on that show. But, it was an amazing experience and I pinch myself that I was actually part of it. However, I’m so happy to be on Midnight, Texas. I really feel like I found a wonderful group of people to work with and a great family. This is my home now. I count my blessings every day.”