The three episode fifth season of British writer and producer Charlie Brooker’s wildly popular and often imitated horror and sci-fi anthology series Black Mirror (which comes on the heels of the blisteringly ambitious and entertaining choose-your-own-adventure story Bandersnatch) suggests an enterprise that’s losing steam and original ideas in a hurry. With only one of the three new entries into the series registering as a worthy addition to Brooker’s cautionary, technophobic cannon (and it being the inarguably silliest of the bunch), one fears that the Black Mirror creator has run out of things to be fearful of and is now content to lay heavily on the same notes he previously played as leadenly as possible. Or maybe he’s just burnt out after writing something as intricate as Bandersnatch and this new season is coming too soon after that for him to recover. Let’s hope it’s the latter. 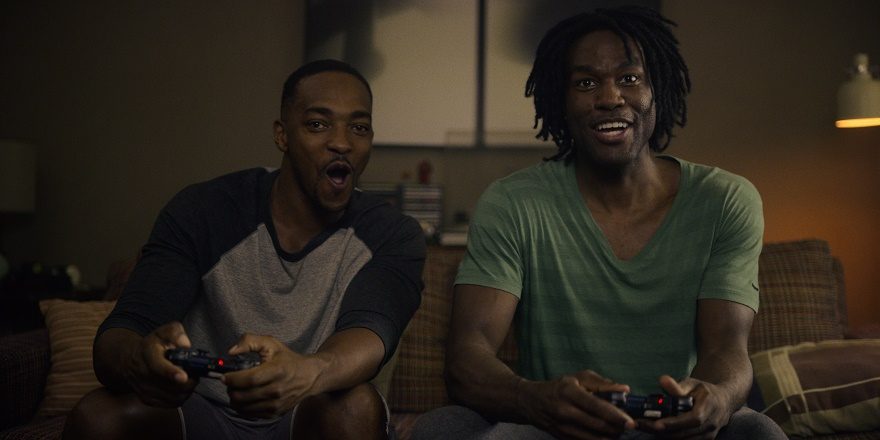 Striking Vipers centres around two former roommates – Danny (Anthony Mackie) and Karl (Yahya Abdul-Marteen II) – reconnecting after years apart at the former’s 38th birthday party. Danny has settled down in the suburbs with his wife (Nicole Beharie), and they’re trying to have their second kid, while Karl keeps living the life of a hard partying, sexually active big city playboy. Karl comes bearing a special gift: the latest edition of a fighting video game they spent many a late night playing in their younger days, only this time it comes with a VR component that makes the viewer experience the same sensations as their on screen avatars. Through playing with each other, Danny and Karl will learn things about their relationship that they never previously considered.

Although it boasts an outstanding trio of leading actors (and Ludi Lin and Pom Klementieff putting in some nice work as Mackie and Marteen’s video game characters-of-choice, respectively), Striking Vipers has Brooker working overtime to obscure the fact that this story is obvious in its ultimate endgame, almost to the point of outright and unjustified trolling of the audience. The link shared between gaming and personal relationships is something Brooker has already explored, but this time he dances uneasily close to the line between social commentary and outright homophobia. There’s no emotion to Striking Vipers outside of obvious panic on the part of the participants, so Brooker attempts to doll things up with a bunch of potentially intriguing and nasty red herrings that go nowhere at all. Striking Vipers is a straight-forward Point A to Point B scenario that feels phoned in and unoriginal despite the material’s protestations to the contrary. Mackie and Marteen are fine, but they don’t have much to work with. There isn’t even much discernable atmosphere in Striking Vipers, leaving the story and actors to spin their wheels until it reaches its obvious, heavily telegraphed twists and conclusions. 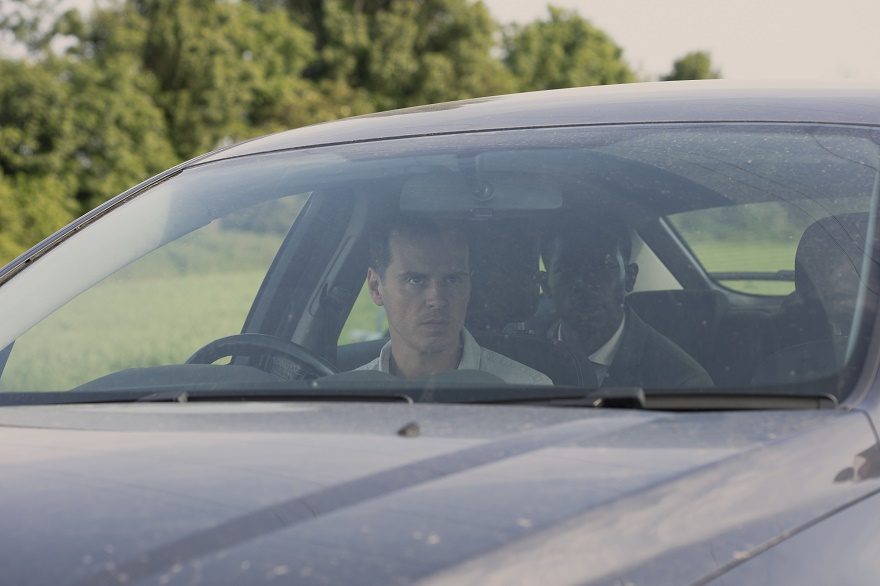 Equally wheel spinning, thinly drawn, and uninspired, but marginally more captivating is Smithereens, the story of a London rideshare driver (Andrew Scott) who takes a low level employee (Damson Idris) at a social media company hostage. His only demand to end the standoff is to speak with the website’s enigmatic, hard to reach owner (Topher Grace) on the phone.

Sure, there’s a twist to Smithereens, but much like Striking Vipers it’s obvious and staring viewers in the face the entire time. It’s also arguably a worse twist. Almost all of Smithereens’ running time is dedicated to a standoff between Scott’s driver and the police in a country field, but there’s little tension or ingenuity – outside of the hostage taker figuring out the cops’ next moves by using social media – in how director James Hawes stages everything. It’s standard siege movie stuff, with negotiations bouncing back and forth, corporate stooges trying to cover their bases, and snipers who can’t “take the shot.” It’s so drearily boring and distancing that it could wrap up in less than ten minutes instead of droning on for over an hour.

The only highlight of Smithereens is Scott, who gives his absolute all in service of the story. He portrays a stressed out, unhinged everyman who’s fed up with how we’re all glued to our phones exceedingly well, but that’s basically just another stock Brooker stereotype at this point. Scott certainly brings up the pulse of Smithereens considerably, but he’s also the only truly watchable element outside of Grace’s considerably smaller turn as the company CEO. They build a considerable amount of empathy for their flawed characters, but that shouldn’t be confused with actual entertainment or social value. Again, it’s a Black Mirror episode where Brooker falls asleep on his keyboard and plays the same tiresome note for a lengthy period of time.

The saving grace of this season of Black Mirror is Rachel, Jack and Ashley Too, which isn’t perfect by any stretch and still comparatively weak when taken into context with the rest of the series, but at least it’s playful, colourful, and pleasingly nutty. It’s also strange that this episode of Black Mirror manages to be the most engaging when it feels less like one of Brooker’s creations and more like a cast-off Goosebumps story.

Rachel (Angourie Rice) is a teen obsessed with pop star Ashley O (Miley Cyrus), much to the chagrin of her Pixies loving older sister, Jack (Madison Davenport). They recently moved to a new town following the death of their mother, so their dad can literally live out his dream of inventing a newer, better sort of mousetrap. For her fifteenth birthday, Rachel wants an Ashley Too doll, a toy robot made in the image of her favourite singer that can interact with the user and make them feel like the two of them are friends. As with most plots involving interactive toys (and cliches that even Brooker himself is more than willing to give into at this point), complications arise with the Ashley Too dolls when the singer’s deteriorating mental state and increasing burnout at the hands of her taskmaster manager and aunt (Susan Pourfar) start impacting the product line.

The set-up for Rachel, Jack, and Ashley Too – much like every other episode this season – is pretty classical in its approach. It’s just another story of a possessed toy, albeit a little sunnier than something like Child’s Play. It’s one of those stories where a pair of plucky, mismatched siblings put aside their differences to get to the bottom of a mystery, and taken in that context, Rachel, Jack, and Ashley Too is fine for a crowd pleasing stand alone yarn, but not much of a Black Mirror episode. It’s a decent enough adventure that teens would like (and adults will probably find more entertaining than the other two entries here), but while Brooker does manage to pivot somewhat in this episode’s second half to talk about a subject he hasn’t tackled yet – the slippery slope of holograms and deep fakes – it’s still just a pleasant enough diversion. There’s some great chemistry here between Davenport and Rice, a nicely bitter and sarcastic turn from Cyrus, and it’s the only episode this season that has a unique directorial vision, courtesy of Norwegian filmmaker Anne Sewitsky, but it still doesn’t compare to the best the series has offered previously.

Before it made the jump to Netflix, Black Mirror was a sporadic curio that felt fresh and transgressive in its approach. Although the length of the series’ installments hasn’t changed much, it’s starting to feel less and less like a show that has something to say with its tales of techno-terror, and more like just another perfunctory series with easily discernible moral messages trying to hit a target number of episodes. The fifth series of Black Mirror is comprised of episodes that feel less like the work of Brooker and more like thin, wanting knock-offs that were inspired by him. It has the appearance of a clearinghouse for half-baked and underdeveloped ideas that were unleashed for the sake of having a product. I think it’s time for Brooker to take a break for a bit and find some new gadgets, social movements, and customs to arise and get worried about anew.

All three episodes in Black Mirror Season 5 are available to stream on Netflix starting Wednesday, June 5, 2019.

Check out the trailers for Black Mirror Season 5: