Life at the top of the world: Living in Nunavut, and travel tips

Snowmobiling on the Sea Ice 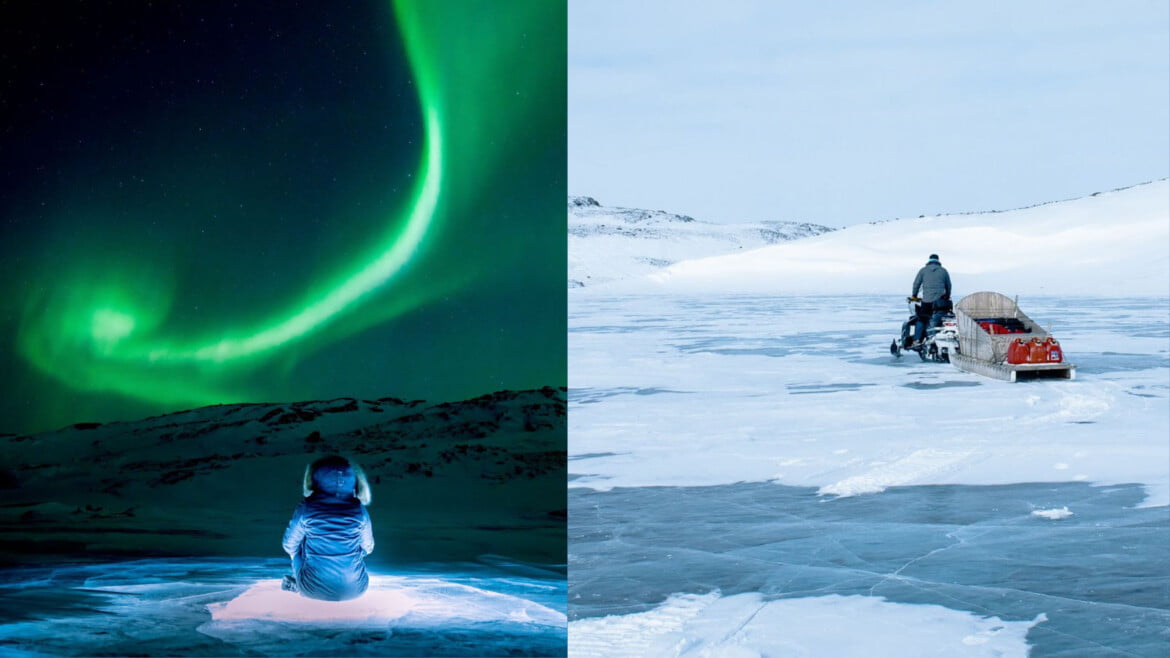 I closed my fist around the throttle and the snowmobile jolted forward; the sudden movement startled me.

“It’s got a lot of power. You only need to hold it a little to start.” And with that, my manager, and lifeline into the ways of northern living, walked away and mounted his own snowmobile.

I gripped the throttle again, gently this time. I eased forward. Out of the corner of my goggles, I could see him and the other soon-to-be guides zooming away. I gripped harder and felt the snowmobile come to life beneath me. As I watched my coworkers grow smaller in the distance, I gripped the throttle more and more, watching the speedometer creep up. 10 km/h. 15 km/h. 20 km/h.

Now I was moving. Slowly, albeit, but I was moving. I felt the snowmobile turn this way and that way as I crested over the jagged pieces of sea ice that had collided with the shore. When I was a few hundred meters from the shoreline, the sea ice flattened out. I gripped harder. 30 km/h. 40 km/h. 50 km/h.

The frigid arctic air stung my cheeks. I released one hand from the handlebars and pulled my balaclava over my face.

The others were small dots in the distance, so I gripped harder in an attempt to speed up. 60 km/h. Now, out on the large expanse of sea ice that covered Frobisher Bay, there were no obstacles in my way. No jagged pieces of broken ice to avoid; and this far north, there were no trees to navigate around.

I gripped harder and harder. The snowmobile kept accelerating; 70 km/h, 80 km/h. The snowmobilers on my horizon grew larger and larger; I was catching up with them.

Despite being a somewhat anxious, uptight person, I let out a huge “Wooooh” that was immediately engulfed by the wind. 90 km/h. I was essentially snowmobiling at the rate of a car on a freeway. I was tempted to push it further… could I hit triple digits?

Before I could fully contemplate the question, I saw the group ahead of me stop. Soon I stopped too. We were at the edge of a large body of water. A polynya, I learned. A polynya is water in the arctic that, for some geographic reason, never freezes over. They’re supposed to be a great place for spotting wildlife, specifically seals. On this particular trip, all we saw were geese, unfortunately (not too unfortunate though, as my manager shot one and brought it home to cook for dinner).

Despite a lack of seals, there was no feeling of disappointment. The sun, hanging low on the horizon, reflected pink light off the polynya. Later, we snowmobiled to some ice cliffs and witnessed the full force of the arctic ocean. Throughout this excursion, one thought kept coming back to me.

The arctic is so frigging big.

The vast tundra stretched endlessly in all directions. Without trees to block the view, I felt like I could see the edge of the earth–and it just kept going.

When our toes grew a little numb and our snacks were depleted, we turned the snowmobiles around and headed back to town. After dropping the snowmobiles off, we retreated to the staff house for dinner and a glass of whiskey (I’d never been much of a whiskey drinker, but the logistics of buying alcohol in Nunavut make whiskey the most economic type, so my pallet had adjusted).

And so went another day living in Iqaluit, Nunavut.

Life at the Top of the World

Prior to my arrival in the far north, I shared my plans eagerly with everyone I encountered. Most people responded with either “Where is that?” or “Why? There isn’t anything there.”

I didn’t have a clear reason, other than that I’d always wanted to go. I remember in grade five, my best friend drew a picture of me ‘living my dream’ for an assignment and it was me riding a polar bear in Nunavut.

So here I was, two decades later, living in Nunavut. For four months, I rode snowmobiles and built igloos with school kids. When the sea ice started to melt, I led groups on hiking trips along the glacially-fed Sylvia Grinnell River and photographed all varieties of wildflowers. I camped under the midnight sun and ate smoked arctic char on the tundra. I danced at The Legion and lost a lot of pool games. I attended festivals and concerts and learned about Inuit history and culture.

Toward the end of the summer, I got the opportunity to travel further north on Baffin Island and support a base camp located near Auyuttiuq National Park. During my time there, I took groups kayaking around icebergs and hiking near glaciers. Despite my best efforts (and wasted safety training), I was never in one of the groups that saw polar bears.

During this summer, I learned how to answer everyone’s questions on why I wanted to come here. Nunavut was so wildly different than anything I’d experienced in my life. In all my travels across Canada since I’ve yet to experience anything like it.

The vastness, the expansiveness uninterrupted by trees; the mosaic of colours of different moss and lichen on the ground. The northern lights, the people, the culture. It was all so vibrant and energizing, and it made me disappointed more people don’t visit Nunavut.

I’ve returned to Nunavut once since that summer, but I bring it up in conversation on a weekly basis. I can’t seem to shake it from my system. Despite that fact I rave about Nunavut to just about every person I meet, I know of only a handful of people who have visited themselves.

When I tell others my story, they usually say they’d love to go, but it’s just too far away. To their surprise, I tell people there’s a direct flight from Ottawa and Montreal (and soon to be one from Toronto, too). Flights are pricey, but a great way to use your Aeroplan points.

So if you’ve got a spare few vacation days, I encourage you to consider Nunavut as your next Canadian adventure. I’ve summarized everything you need to know about travelling to Nunavut in this Nunavut guide, but here are a few highlights:

If you have any questions about planning your own trip, let me know!

Mikaela is the voice behind Voyageur Tripper, a blog dedicated to outdoor adventure. She previously worked as a wilderness guide, leading trips throughout Ontario, Quebec and Nunavut. She currently lives on the West Coast. Follow her on YouTube and Instagram.

All story photos by Mikaela Ferguson.