Went to shoot the last couple of bands at the Family Values tour last night and was amazed, and I mean shocked here, by the emptiness of the Molson Amphitheatre. Not only was the grass area empty, but even the last seated section (the blue seats I believe) was mostly empty.

It was kinda sad, but I have to admit I didn’t see much advertising for Family Values, and there were only two names I was interested in: Amy Lee of Evanescence and maybe… maybe… Korn. 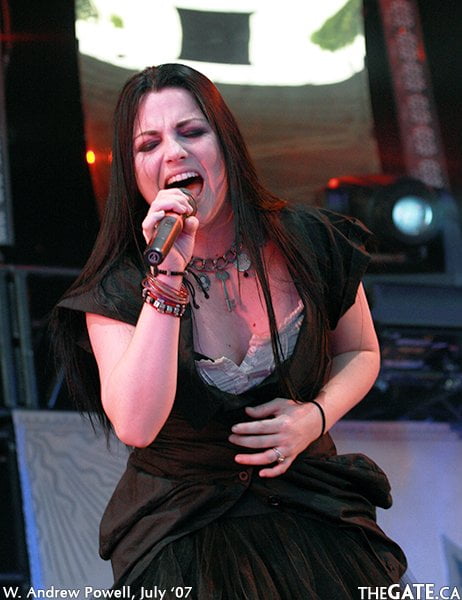 Amy wasn’t in her top form, at least not compared to the show I saw at Kool Haus last fall, but they were decent. Only got a couple of cool shots though because Amy has this thing about singing with her face straight in the air and the microphone right in her mouth. Didn’t make for the best shots, but I was definitely just glad to finally get shots of the band performing.

Korn and lead singer Jonathan Davis on the other hand were awesome to shoot, although I can’t understand why people want to see them perform. They’re an awful band live, and Davis can’t seem to hit the notes at all. I love Korn’s music on the radio, but you’d never see me lined up for a show normally. 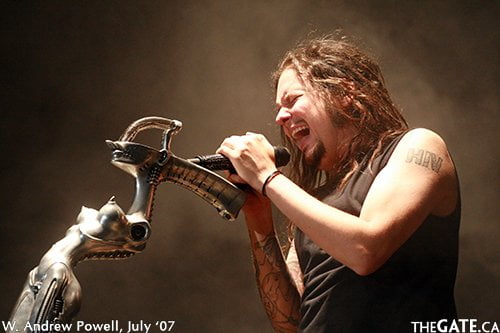 However this was a huge show for me in another way since it signifies the real death of the evil monster known as House of Blues. I’m not going to get into everything, it’s just not worth it, but over the years they’ve kept me out of shows based on the fact that I publish online. Welcome to 2007. Anyway, the good people of Live Nation took them over a while back and I’m finally being given access to shows, or at least the right to request access. Maybe I won’t get into everything, but you can bet you’ll be seeing a lot more concert photos on The GATE now.

That’s a pretty terrible “review”. To say “They’re an awful band live” and say that you like them on CD just doesn’t make sense. But Korn is one of the best live bands. Jonathan puts so much emotion into his performances.
And the only people that deserve to take photos at the concerts are the fan sites, period. Their more dedicated than any stupid stuck up editorial site.

That definitely wasn’t a review, and maybe I didn’t explain it right. What I should have said was that musically Korn is pretty awesome. Great beats, relentless, heavy, all the good stuff – but Jonathan Davis is a terrible singer. He can’t even hit half the notes he sings on his own CDs, making me think there’s some editing involved to get those notes. On stage he’s energetic, but terrible, terrible singer.

And fan sites can shoot all they want, but I expect you’ll find most bands want more attention than that. I’d also say there’s nothing wrong with multiple opinions either.

Over the years his voice has been getting worse and worse just like any singer. Do you see Ozzy doing anything impressive with his voice? Do you hear him with his low-hanging voice during his shows? No.
And more attention? No offense to you dude but this site is pretty dead as it is. But yeah, bands should pay attention more to their fans than editorials, reviewers, or any of that BS.
And what songs does Jon fail to hit the high notes on? There isn’t very much songs where he needs to. Evolution might be the only song that he does pretty terrible on.

Well, when I talk about more attention I mean that a band would be crazy to exclude anyone but fan sites. Local newspapers, magazines, etc. There’s no point in taking this to a debate of music art vs. commercial gain, but concerts are for the money – and they mean huge bucks. On top of that critics mean awareness of a band – which also means maybe more fans to buy the CD.

Most bands are also all about the fans, doesn’t mean they should avoid being reviewed because someone might hate them/not get them.

For the bad songs, there’s a number of them, but I always think of Freak on a Leash. I don’t think it’s age either, I just don’t think he’s a good singer live. Lots of artists get cleaned up in the recording studio and I’m sure Davis is one of them.

who is this tim? how dare he negatively criticize The Gate?

Good to hear about Live Nation/HOB. I gave up on HOB a long time ago, just wasn’t worth the fight.

I can dissect each of Tim’s points – point by point – but they didn’t make much sense.

Hahhaha. Thanks Adam! What can I say, I’m a lightning rod for criticism!

And you may want to get in touch with LN. They’re so awesome.