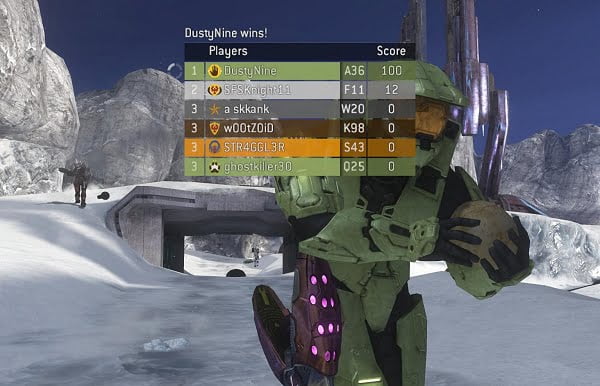 Gaming is more than a hobby for me. It’s practically an obsession (up there with movies, music, books… well, entertainment in general). I’ve been playing games since Pong first came out, so it’s kind of in my blood now. The thing is, as someone who frequently reviews games, I don’t always get to stick to one game. Sure, I’ve played all three versions of Halo, but until today I’ve only been able to run through the story mode and it could be days again before I get to play online again.

However I have to laugh when I then get into a match online and because I’m technically ranked as a n00b (a Recruit), people of course instantly make fun of me when I’m going into a match. In my first match, a session of Oddball, everyone was a newbie and I managed to easily win the match. So when I was openly mocked in my second match I had to laugh a little, I mean – rank just means how many hours you’ve wasted away on Halo 3, and I guess how much ass you’ve kicked. It doesn’t take into account that say, you played Halo 2 for dozens of hours.

That said, I’m no fanatic. This was only my second game, and even though it was Ninjaball, these guys have had the game two weeks and they were already all Corprals and Sergeants. And then I kicked their asses. One person grabbed the skull, me and another guy shot him down, and then I won.

Sure, it was an evasion game, but in my fourth and fifth matches I also pulled a respectable third place for most kills.

So for the Halo players out there, don’t underestimate the newbs. Just because you’ve had nothing better to do for the two weeks and already have some huge, insane rank, doesn’t mean someone new to the game isn’t going to wipe the map with your skinny, pimply ass.

P.S. I’ve created a cool little map through the Forge that you can download. It’s called The Danger Room, and it’s based on The Pit. It’s only my first map, but there’s some cool weaponry hidden everywhere, and one special room is rigged for an ongoing explosion if someone opens fire nearby. There a forum post where you can download the map, and you can get the video over here.

Those ranks youve mentioned arn’t actualy high, I had my first game yesterday and even went on a killing spree that resulted in me winning the match by quite alot. It takes about one night of playing to get to those ranks.

um im sorry but halo 3 sucks and looks like a cartoon. It only got so many sales because halo 1 and 2 were such good games. Previous gamers who played halo 1 and 2 expect halo 3 to b good. How ever it was extremely disappointing

Jay – I can’t understand how so many sources are rating it as perfect, but it’s still a decent game. Maybe not as good as 2, but the online play has improved a lot and the Forge is pretty killer.

Dale – Yeah, I still find it funny that people bother trash talking when they haven’t played against you yet though.