Alexander vs. Uwe: Round 2 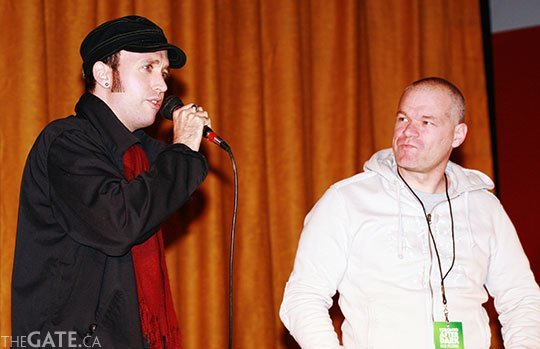 Chris Alexander and Uwe Boll at Toronto After Dark

Tonight was my first chance to attend Toronto After Dark, which actually kicked off last night, and what did I show up for? Well, it wasn’t a horror movie, unless you count that personal sort of self-repulsive horror you get from certain acts. No, it was Uwe Boll‘s latest film In the Name of the King: A Dungeon Siege Tale – a Lord of the Rings-style mini-epic that’s layered in Boll’s particular filmmaking style.

To be honest, I actually don’t mind Boll. As long as you can accept that everything he touches turns to pure kitsch, his films can be pretty fun, and In the Name of the King is actually pretty epic in its own way. The cast is also insane and includes Jason Statham, Ron Perlman, Claire Forlani, Matthew Lillard, Leelee Sobieski, and… Burt Reynolds

While I’d say that Lillard and Reynolds easily steal the film in terms of comic kitsch, you’ll want to watch most of the film thanks to Statham, Sobieski and especially Perlman. The special effects are also pretty descent, and the fight choreography is actually really brilliant.

But the highlight of the night was the quick Q&A featuring Fangoria writer Chris Alexander with Boll answering pretty much any question (even when one woman asked how many tupees Reynolds went through on set, to which Boll responded that he wasn’t personally in charge of that particular part of the filmmaking process). Alexander and Boll actually go way back – a couple of years ago Boll challenged any and all critics to fight him in the boxing ring – and Alexander happily accepted.

Anyway, it was a cool night and the best part was the way the audience reacted to the film. I’m just figuring out now how many more films I can catch before Toronto After Dark ends, and if I can make it to the Zombie Walk tomorrow. Stay tuned!