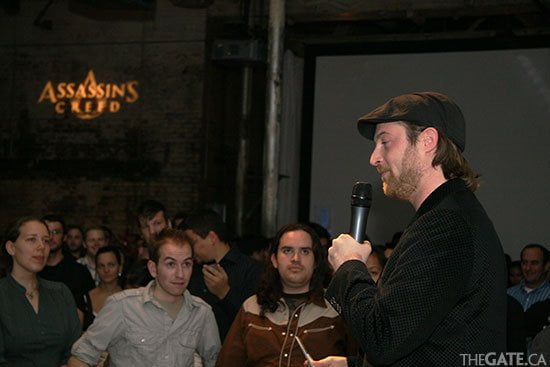 Last night was Ubisoft’s big launch for their new game Assassin’s Creed, and while I enjoyed the event, it was kinda weird, but not exactly in a bad way. Most of the gaming events I go to are in clubs, much like last night, and there are always stations set up to play the games and drinks are served. However the oddity for me last night was that everyone was dressed up.

A lot of people were in suits or dresses, it looked like most people had combed their hair, and I didn’t even see a stain on a single t-shirt.

Okay, I make a little fun, but I don’t think I had ever been to a gaming event that was quite that fancy. A lot of Ubisoft’s people had shown up to celebrate the launch, so that might explain it a bit, but it was still weird feeling underdressed at an event to promote a video game. Of course then all the media people showed up and poof – an odd balance between suits and t-shirts.

Afterwards I got home and started playing it a little, and I really like the game and the concept, but I have to say that there are moments where the graphics aren’t pristine. There are scenes where people’s clothes are moving, even as they’re standing still, and in terms of gameplay there are long cutscenes between action.

I’ll need to play it a lot longer to see what I really think. I’m also certain I’ll love it once I get into it – but that was just my initial impression.

Regardless of what I end up thinking of the game, I’m still impressed Ubisoft managed to classy-up a game event. Stay tuned for a review and other coverage on the game.