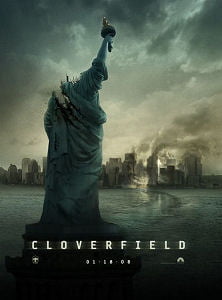 The monster movie that everyone’s talking about, mainly because no one knows what it’s actually about, finally has an official name. Known for the last few months as “1-18-08” and producer J.J. Abrams‘ secret project, a new trailer for the film debuted during the American Thanksgiving and officially referred to the film as Cloverfield.

About the only thing we know so far is that a group of friends find themselves in the middle of a disaster that comes complete with a giant monster. Buzz is still strong that this is either a Godzilla redux, or a take on one of H.P. Lovecraft‘s tales, although there’s also strong buzz that the film somehow fits into the Lost universe.

The trailer doesn’t give too much away, although a large creature appears to be walking through New York City as military shoot at it. The official movie poster also shows obvious claw marks down the back of the Statue of Liberty, and ripples leading from the statue to the city shore, followed by a path of destruction.

Since Abrams and crew are pretty tight lipped, all we can do is speculate. Check out the official movie site at www.cloverfieldmovie.com, or take a peek at the original teaser site right here.

Update: Just got a note from an anonymous person that all the rumours about Cloverfield are false. (I should have mentioned previously that the big suspicion was always that Cloverfield is J.J.’s own creation.) Anyway, here’s what the person said:

“Buzz on these theories died months ago when Abrams came out and said they were all false and that Cloverfield is a totally new creation.”

I can’t find any quote from Abrams specifically like that, but according to cloverfieldnews.com J.J. did say at the Comic-Con in July that “I wanted a monster movie, and had taken my son to Japan, and there were all these Godzilla dolls everywhere.. however, I decided we needed our own monster.”

The problem is, there’s so much rumour and speculation out there on Cloverfield, it’s actually a mess to figure out what is real news. Mind you, that’s probably half the point.