Daniel Radcliffe and ‘The Woman in Black’ 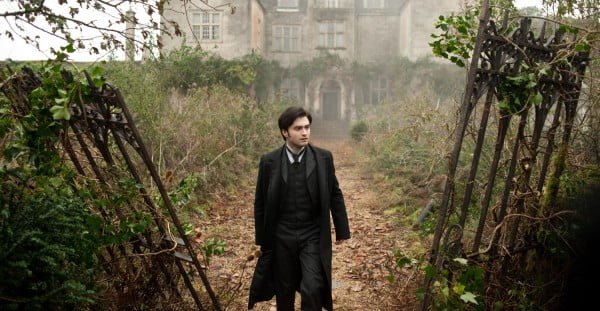 Daniel Radcliffe in The Woman in Black

Just wondering, movie fans, but do any of you have questions for Daniel Radcliffe? Let me know–I’m interviewing him on Friday for his new film, The Woman in Black, and I would be curious to hear what some of you would ask him.

Admittedly, I can’t ask him a lot of questions, but if you have a good question, leave it in the comments below and I’ll see what I can do.

If you’re wondering, the film is a creepy supernatural thriller (which comes across as an edge-of-your-seat scare-fest) with Radcliffe playing Arthur Kipps, a lawyer suffering from grief after his wife died who “is sent to a remote village to sort out the affairs of a recently deceased eccentric.” Arthur discovers that there is more going on in the scary village though, and they are all trying to keep a frightening secret from him–namely that the vengeful ghost still haunts the house where he is living and she will stop at nothing until she finds something she has lost.

The Woman In Black opens in theatres on Friday, February 3.

If you will, ask Daniel (whenever you’re interviewing him, tomorrow) if he’s ever had the opportunity & pleasure to sit down and read Susan Hill’s 1983 novel, “The Woman In Black” (the original story that the 2012 film is adapted from), before. Thank you!

So, Andrew … how did your interview with Daniel turn out & what was his response in regards to my question? I hope the interview was fun / enlightening for you and I’m absolutely PSYCHED to watch the new “The Woman In Black” this Friday!

Daniel was great–very nice guy. In terms of the book, he did read it, and also met with the author to help get a sense of the character. Later this week the interview will be online, so keep an eye out for it and the full quote.

Alrighty, then; I’ll be on the lookout for the complete online interview! Thank you for asking Daniel my question & commenting back his answer (I’m kind of surprised though, that I was the only person to submit a question for him … weird, but cool!). Only 3 more days ’till the US film premiere … I can’t wait!

It is kind of weird, to be honest–I had a few questions on Twitter and Tumblr too, but not that many considering it’s Daniel Radcliffe.