The roundup: Writers strike, Julia Roberts, and return of Kitt 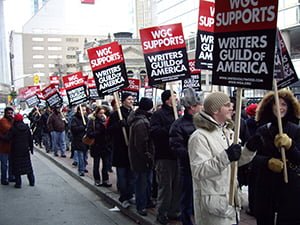 The strike is mightier than the pen
How much do you like reality television? A lot, I hope, because the Writers Guild of America strike looks like it’s not going to be over any time soon. Reuters is reporting today that the writers have refused a new offer from the Alliance of Motion Picture and Television Producers because it was too stingy. At the heart of the discussion is the amount of money writers are paid when shows are displayed on the web, but the producers don’t want to increase the amount.

With the latest talks the producers offered an increase that would amount to $130 million in payouts for writers, but the writers say the increase works out to only $250 per episode re-aired on the web. That’s in comparison to $20,000 that is paid out when a show is re-aired on network TV.

The far-reaching effects of the strike have already stopped production on almost every film or TV project that didn’t have a completed script. On the bright side though, if the strike lasts long enough, we may not have to avoid films like Rambo 21, or that new thriller about the guy being stalked by a killer meter maid. I may just have to turn my TV off though if all I’m going to see is 24 non-stop hours of American Idol.

Julia Roberts kicks ass
In yet another tale of tabloid photographers gone mad, Monsters and Critics is reporting that Julia Roberts had an issue with a photographer who was filming near her children’s school. The star followed the photographer and forced him off the road and confronted him on the issue. Apparently TMZ.com even has the video.

In the U.S. it’s a definite no-no to film anywhere near a school, but apparently that’s where the law stops protecting people from these glorified stalkers. I just find it baffling how many times you hear in the news that photographers can do everything but drag celebrities out of their cars, and somehow it’s okay.

Maybe we can adopt a new sport in an effort to protect a few stars. Come on, they’re awesome – they deserve. Here’s what you do: grab a group of 10 to 20 friends and follow a scuzzy photographer around until he finds his celebrity as they’re breastfeeding or whatever. Then, create a big scrum around the photographer and either start taking their picture or I don’t know, just yell and badger them. Remember, it’s okay to get in their face, just don’t touch them and it’s all perfectly legal. You can make a difference.

Kitt, what have they done to you!?
In sadder news, Jalopnik.com has photos that they are claiming are the first official shots of Kitt from the new Knight Rider TV show. It’s basically just a modified Ford Mustang (okay, the guys at Jalopnik call it a Shelby GT500KR) with the iconic red light above the grill.

Sorry, but TV show? Here we go again. I thought they wanted to do a movie. Either way, it looks really lame. It’s basically just a black car with a red glowing bar. I don’t know how they did it, but the original Kitt actually looked really cool. And somehow the whole vehicle placement thing worked out okay for me in the Transformers movie, but this time it’s just not right.

Of course this is also just further proof that the rape of 80s culture continues with no end in sight. Expect lots more dull-witted, and disfigured offspring in the near future… unless this writers strike lasts long enough to bring down Hollywood completely.

We could only wish to be so lucky.

[…] Critics is reporting that Julia Roberts had an issue with a photographer who was filming … thegate.ca/blog/2007/11/30/the-roundup-writers-strike-julia-roberts-and-return-of-kitt/ See all stories on this topic: […]