A Zune for Christmas 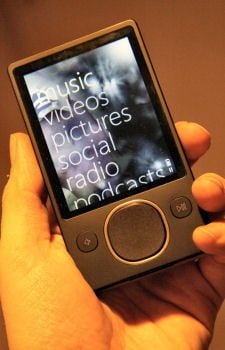 After weeks of waiting, I’m finally happy: I got my hands on an 80 Gb Zune, thanks to Aisha, and some amazing teamwork.

As you may know, if you’ve read my blog much this year, I’ve been pretty peeved that Microsoft has been withholding the Zune from the Canadian market. With no announcement in sight as to when they’ll bring the device to this part of the world, I had my hopes set on picking one up south of the border.

Well, no luck – when I was down there in late November there were none to be had in stores.

Fast forward to Christmas day, and I was more than a little shocked when I opened my last present and found that Aisha had managed to make some connections through her mother to get a Zune up here.

This is where the story gets complicated. Irene is what you would call a fanatic fan of Josh Groban, or as they like to call themselves: a Grobanite. She got in touch with one of her “Grobie” friends (thanks Carol P!), Aisha called into a store in the U.S., paid for it with her credit card and had it shipped to Carol’s house. Carol then got the package, sent it on the Toronto, and Aisha had me drive us to the post office to pick it up under the guise of it being some other gift for someone else.

Yep, I’ve joined the Zune society, well, without any of the social features. Honestly though, I don’t care about most of those options – the reason I wanted it was for a device that doesn’t rely on the iTunes scheme, and offers a nice, big screen to watch video on, and an FM tuner.

So, I just wanted to say a huge thanks to Aisha, Irene, Carol, and well – the whole Grobie network. I’m now off to finish synching up all my music and to buy some accessories from eBay.

And to Microsoft, well, you really dropped the ball on this one. I really think the Zune could have been one step in breaking Apple’s dominance in the MP3 player market. Even a soft launch of the flash-based Zunes would have been a good thing, but whatever. You must have some other plans, but you’re sure taking you sweet time, and as one consumer, it comes across as pretty stupid considering how close the Canadian and American markets are to each other.

[…] than a few technophiles, myself included, have been waiting for this news for some time, and today at the Consumer Electronic Show, […]

[…] than a few technophiles, myself included, have been waiting for this news for some time, and today at the Consumer Electronic Show, […]

I have a friend with the 30gb zune and I thinks its awsome. I’m really hept up for the 80gb when it come to Canada. Now official, Zune comes to Canada sometime Spring of ’08. Can’t wait.