Ignorance, thy name is Fox News 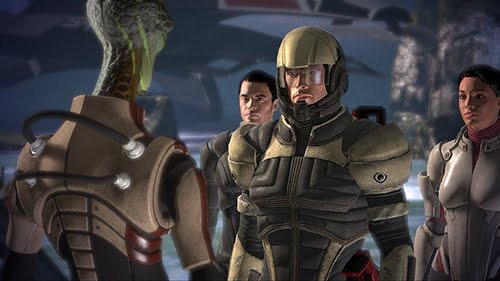 Every year, these stories seem to pop up, again and again. Someone hears there’s this offensive remark in a movie, or something sexist about a TV show, and sight-unseen, they’ll go out of their way to say it’s the worst thing ever.

Of course, stupid comments aren’t reserved for just movies, and the New York Times is reporting that a show called The Live Desk With Martha MacCallum on Fox News had a guest named Cooper Lawrence who claimed that Mass Effect has nudity and depicts sexual acts.

Let’s pretend that there is hardcore sex in Mass Effect (there isn’t though). Since the title is rated ‘M’ for Mature, wouldn’t you think parents would take notice? Do parents let kids go out and rent or buy ‘R’-rated movies? Shouldn’t it be up to parents to, oh, I don’t know – act like a parent and restrict what kids are allowed to buy, play, or watch? You can whine and bitch about what kids are exposed to – but a majority of it depends on what you let them do at home. I’d also like to think that actually raising a kid with proper values means that they won’t have issues when they do get exposed to violence or sexuality in fictional stories.

Anyway, the real point is that Lawrence was wrong – there is a sexual scene, but as she says in the New York Times article, “I’ve seen episodes of Lost that are more sexually explicit.”

She had never seen or played the game prior to making her comments, and rather than do any actual research, it seems like both the host and Lawrence jumped to conclusions. They also approach the topic as outsiders, and press the expert out of the discussion within seconds, ignoring all of his comments.

I will give her credit, Lawrence has since seen gameplay and the New York Times article notes that she said, “I really regret saying that, and now that I’ve seen the game and seen the sex scenes it’s kind of a joke.” Still, it would be nice to see media professionals tackle issues like this with some intelligence, and style rather than jumping to the usual conclusions.

Credit is also due to one person on the show who mentions that it’s up to parents to protect their kids… and let’s face the reality of it. If kids want to see questionable content, you don’t have to look any further than the net.

You can watch the video of the segment over at YouTube and for the record, Mass Effect is a brilliant adventure with a thoughtful story and great characters.

You should be more careful in your reporting as you stated that”I give her credit, MacCallum has since scene gameplay…” False. Proofread before you report something otherwise you wind up looking just as bad as Fox.

I would just like to remind everyone, that Cooper Lawrence NEVER APOLOGIZED. Rather she said that she “regrets” remarks. She is not sorry, she does not admit that she was wrong (she says other people told her stuff), and I don’t believe that anyone in the gaming community should relent until she specifically apologizes to the developer, publisher, players, retailers, and gamers in general.

Because of people (“See You Next Tuesday types) like her it makes my life difficult as a member of the game industry with children. I know of several parents who simply refuse to allow my children to play with theirs because of people like her.

So until I hear a sincere apology, screw her and everyone in her life.