I am what you would call a passionate person. When it comes to things I enjoy, well, I’m happy to enjoy them as much as I can. Chocolate, for instance, and photography, watching hours and hours of movies, listening to hours and hours of music, and gaming.

After I got my Xbox 360 in the late 2006, I put in more hours than I want to admit playing games. Overall, I can’t guess how many hours I’ve played, but on average it’s would have to be about 25 hours a game, and I know I put in about 125 hours on Oblivion.

Tonight I’ve been scorned though. Cut off, as it were. My Xbox 360 has officially experienced the “three flashing red lights” as Microsoft puts it, or more commonly known as the Red Ring of Death.

The warning signs had been popping up for a few days, but I was hoping it might just blow over. I would be playing a game, there would be a weird noise, and the game would freeze. That happened four more times before I tried restarting and all I got was the RRoD.

So now I’m kinda peeved with Microsoft for their shoddy product, but I’m also nevous as hell. All I’ve read online are how people have gone through three and four replacement Xbox 360s. And until I get the damn thing back I’m going to have to settle for playing my PS3 (which I only have two game for at the moment).

On the lighter side of things, this is an awesome shirt, might have to order one. 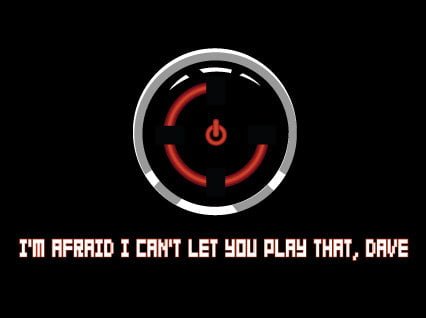