The many faces of Josh Groban

This afternoon the Sunnybrook Foundation had a press conference for their One Night Live benefit concert, with Josh Groban on hand to speak about the show and why he was involved. It was a really positive event, with the Foundation announcing an $8 million donation from a donor family, and all of the performers were on hand for a photo op at the end.

Josh also talked about the fact that some of his fans, who call themselves Grobanites, originally contributed money for his charity work.

But what I really have to say is that Josh is one expressive dude, or you’d think so from looking at my pictures.

I took about 200 photos and in each shot he had a completely different expression. He was all over the place. Happy Josh, Pensive Josh, Concerned Josh, Sleepy Josh, and of course, my favorite, Maniacal Laughter Josh.

Seriously, what is up with this guy? As a side note, I think he could have used a brush and a shave, but hey, the man is golden. Good cause, good time, Good Josh. 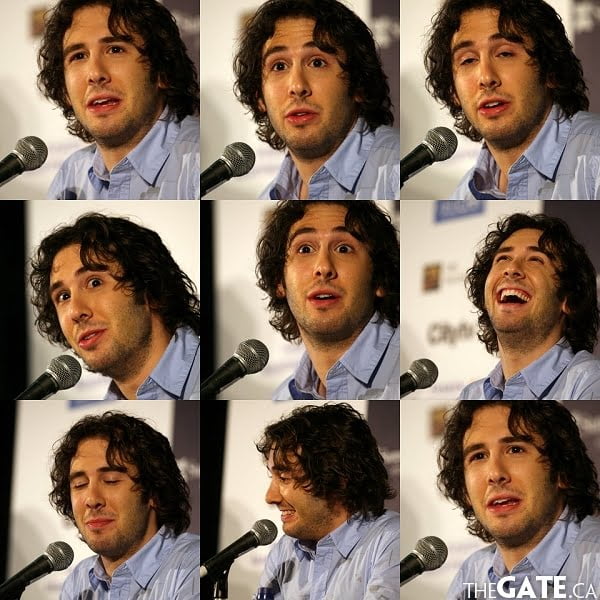 The Many Faces of Josh Groban

I LOVE your pictures of Josh. Yes………Josh IS very expressive…..with his face AND his music. He also likes to talk with his hands a lot. And I am also a fan of the “maniacal laughter Josh”! And…..ummm………is there any chance you might post the OTHER 191 photos of Josh you took? HA!

Love YOUR sense of humour!!! Isn’t he fantastic — expressive & real!!!

Oh My……those are hilarous. You have a great sense of humor too, love those pics……and I ALSO wish to see the other 191 expressions of Josh :)

Great article — talk about being able to “read someone’s face”, with Josh, you get volumes! Let’s see the other 191 pictures, PLEASE!

Hi there wonderful Gate Editor – You have captured our Josh so beautifully – he is a man of many expressions and we Grobies love each one. Thank you for posting these and dear Grobies that might be reading my comment look forward to seeing the many of the other of the 191 pictures on FOJG. Coutesy of the Gate.

Thanks so much GateKeeper for the pics and news conference info. Yes, Josh has many expressions. Irene, just read your post. Can’t wait.

Will, phenomenal job here! Bravo. Hope you enjoyed taking these photos as much as we enjoy seeing the man!
warmly, from a Massachusetts Grobanite friend of Irene’s

Awesome photos Wil! Most of all, awesome way to bring attention to such a worthwhile charity. I am inspired to see all those who continually use their own personal blessings to benefit others. As it should be! Love not only the expressive faces of Josh, but moreso the intelligent, broad-minded, open-heart of truth with which he speaks.

I love “The Many Faces of Josh Groban” – he is a golden boy and yet he is very humble and sweet. How wonderful these pictures and your article are. Now are there any more of Josh you aren’t sharing? Huh? With Sugar on Top! :)

I also love “The Many Faces of Josh Groban”. Can’t wait to see the other pics…hope you plan on posting them. I don’t think he needs a brush or a shave!!!! That’s our Josh!

Yes, you are correct, Josh is very expressive!!!

Thanks for the pictures!!!

Wow…thanks so much for doing the little montage of expressions, we’ve gotten to know that about him over the years but it’s so cool to see new people discover his animated sincere expressive personality. The man is an open book, and his heart is as bigger than anyone I’ve ever met. Golden indeed !!